Introduction - FreeSync 2 HDR and The Oasis

Yesterday, we were contacted by a member of AMD's PR team who told us about a new Radeon Demo known as "The Oasis", a tech demo which is designed to showcase the benefits of FreeSync, HDR displays and the combined benefits of AMD's FreeSync 2 HDR displays.

With little more than 24 hours notice, we decided to take up AMD on their offer and try out their "The Oasis" demo, with hopes to encourage the company to release the demo publically. Moving forward we expect AMD to be showcasing this demo at future events like Computex and on displays at high-end PC retailers, though we would prefer to see this demo also to be available to real-world PC users, as well as smaller retail outlets.

First of all, we need to chat about what FreeSync is, what HDR monitors offer and how FreeSync 2 does more than merely combine both technologies together.

Traditional PC monitors shipped with static refresh rates, with 60Hz being the most common today. As their refresh rate implies, these screens work best when used with a static PC refresh rate, with 60Hz displays functioning perfectly with 60 FPS refresh rates, assuming that every frame meets its frametime targets exactly. When both framerate targets sync up, PC users, especially gamers, will have a smooth experience, but when they are out of sync things can get a little messy.

Sudden dips in framerate will give games what is known as "stutter", momentary pauses in gameplay that impact the smoothness of the experience. The same frame may be shown for multiple refreshes, breaking immersion and ruining what is otherwise an ideal gaming experience. Another phenomenon called tearing is also common, where the image that is sent to a monitor is changed mid-refresh, causing one section of a screen to showcase a new image, while another displays an older frame. This is most noticeable in games with a moving camera, appearing as a line where two different images are merged together.

Addressing these issues requires a radical change in how monitors work, with AMD's FreeSync technology giving refresh rate control to the user's graphics processor. With FreeSync, compatible monitors can support variable refresh rates, providing PC users with a variable refresh rate range where PC framerates and display refresh rates can line up. For example, if a screen has FreeSync support and a FreeSync range of 48Hz to 144Hz, a PC with Radeon graphics can output a framerate that's anywhere between 48Hz and 144Hz without introducing any tearing or stuttering. This allows games to feel more immersive and smoother, despite variable framerates.

HDR, High Dynamic Range, can mean a lot of things in the display market, but three main factors are worth considering, contrast, luminance and colour gamut range.

In a way, peak luminance and contrast both work to offer the same kind of result. More detail in darker scenes and realistic imagery in bright scenes. Brighter highlights and dark scenes that provide greater levels of detail. While higher resolutions like 4K work to offer increased sharpness and clarity, HDR works to provide more detail by enabling dark scenes to provide more detail and for brighter scenes to deliver more realistic images. Ideally, HDR screens will be capable of showcasing bright highlights and detailed dark locations within the same image, something which typically requires OLED display panels or advanced backlight technology.

The other side of the HDR coin is support for wider colour gamuts, which increased the range of colours that modern screens can showcase. This makes images more detailed and realistic by showcasing a broader range of colours and greater colour resolution on HDR content. If well implemented, HDR screens can offer brighter highlights, more detailed dark areas and greater levels of colour detail and accuracy. 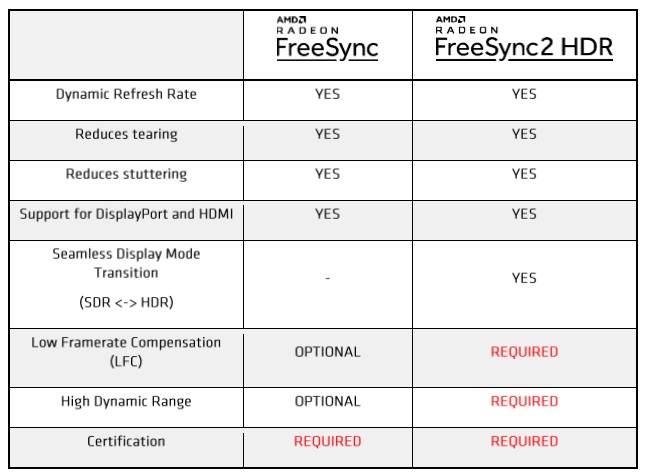 So what makes FreeSync 2 HDR so special? Isn't it just FreeSync with a dash of HDR thrown into the mix? No, FreeSync 2 is a little more than that, adding a few extra technologies into the mix which make FreeSync 2 a little better than that sum of its parts.

For starters, FreeSync 2 displays require seamless transitions between SDR and HDR content, which means that these screens have no black screen moments when switching between SDR and HDR. Secondly, FreeSync 2 HDR displays must support AMD's Low Framerate Compensation (LFC) technology, which allows FreeSync displays to expand their FreeSync range by using a form of framerate doubling. For example, the 48-144Hz screen we mentioned earlier could double a 30FPS framerate to 60FPS, by displaying the same frame twice, and offer a wider effective FreeSync range.

On top of LFC support, FreeSync 2 monitors must support HDR to the levels that are defined by AMD's standards, which define peak brightness levels, colour gamut support specs and contrast level requirements that must be exceeded to achieve AMD's official certification. On top of that, FreeSync 2 HDR screens have input latency requirements, which ensures that FreeSync 2 HDR screens offer a great gaming experience both inside and outside of HDR content.

The video below explains the benefits of AMD's FreeSync 2 technology.

The Oasis is a new tech demo from AMD, something which should not be confused with a benchmarking utility. This is not for comparing graphics cards, but it is designed to showcase the benefits of FreeSync, HDR technology and Radeon FreeSync 2 HDR panels.

In this tool, users can define the framerate of the test, enable/disable FreeSync, HDR and FreeSync 2 HDR on the fly and quickly judge the benefits of each technology. The tool runs using the DirectX 11 API and showcases a location that is known as "The Oasis".

AMD has designed this tool to offer fixed framerates, unlocked framerates and an FPS "Sweep" option that simulates real-world gameplay by increasing and decreasing the tool's framerate on the fly. Graphical options are also available for the software, which enables it to be used on lower-end Radeon hardware, such as the RX 560.  By default the tool supports 1080p and 1440p screen resolutions.

The Oasis is designed to be used for FreeSync On and FreeSync Off comparisons, making it a useful tool for trade shows and retail displays. The HDR and FreeSync HDR capabilities of the utility also allow it to showcase standard HDR VS FreeSync 2 HDR as well as standard FreeSync VS FreeSync 2 HDR, making the tool extremely versatile depending on what you want to compare.

Dicehunter
Hope they do make this publicly available as their windmill demo is very buggy.Quote
Reply