Any new processor, be it of the central or graphics variety, comes with a set of brand identifiers for the underlying technologies and the Radeon RX 5700 range is no exception. The 7nm process, as well as coming with the Navi codename, is based upon the RDNA architecture. Radeon DNA. This means compatibility with the current GCN instructions and yet optimised for ease of programmability and energy efficiency, with reworked Compute Units and SIMD - Single Machine, Multiple Data - for even faster processing and improved single-thread performance. Single thread performance is something we've also seen improved on the 3rd Generation Ryzen CPUs, so it's clearly something the AMD gurus have been working hard to improve. Additionally the Navi GPU can take advantage of PCI Express 4.0 with twice the bandwidth of the current PCI Express 3.0 setup. 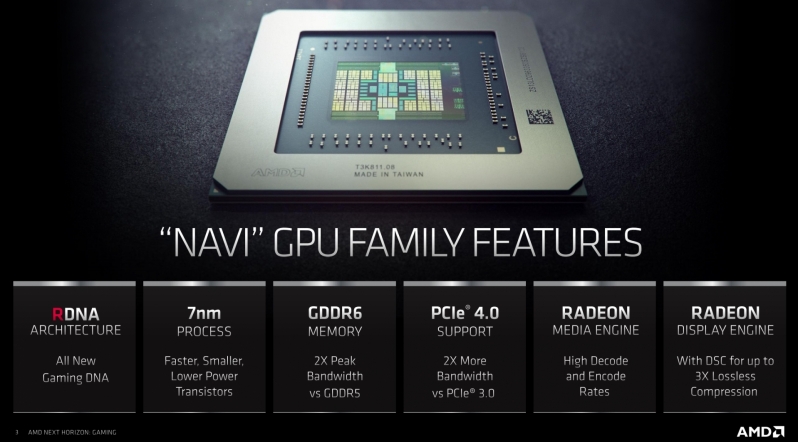 We won't pretend that we understand the full ins and outs of the GPU layout, or how the redesign can aid performance beyond the obvious idea that the shorter the distance between each element the lower the latency and therefore the faster the performance can be. We are enthusiasts and journalists, not people with doctorates in silicon design. We are much like you, dear reader, in that "this is all very well but how fast can it run my games and how gorgeous do they look?". If you're desperate for a more technical explanation of how this all works then AMD have all the bumf and you're free to fill your boots. Maybe the fact that the RDNA architecture can group 64 threads as 2 Wave32 which are then executed by 2 SIMD32 for higher ALU utilisation means something to you. Us? We'll focus upon the bits that are more transparent to the end user. 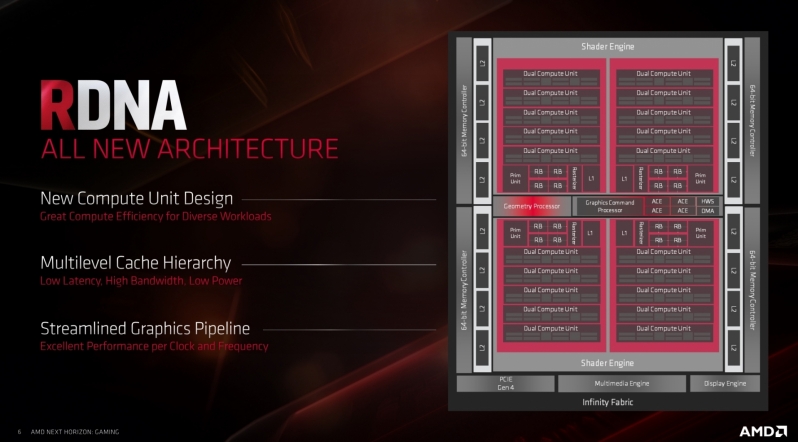 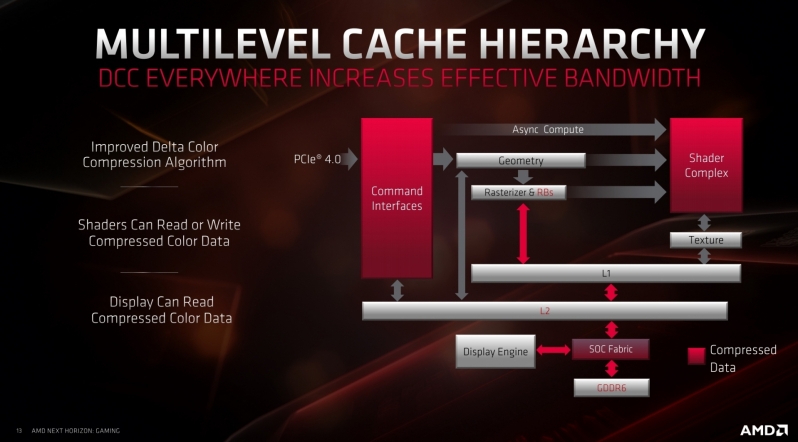 Speaking of transparency, this is something we can get behind. 25% improvement in performance per clock when compared to the preceding GCN Radeon design. You don't require a PhD to understand that faster equals better in nearly all aspects of life. We spoke in our introduction about how the lessons learned in the design of the Ryzen processors have quickly taken root in the AMD DNA and it's clear that they not only understand how to make their processors useful, but how those improvements can be used to increase the effectiveness of their graphics cards. 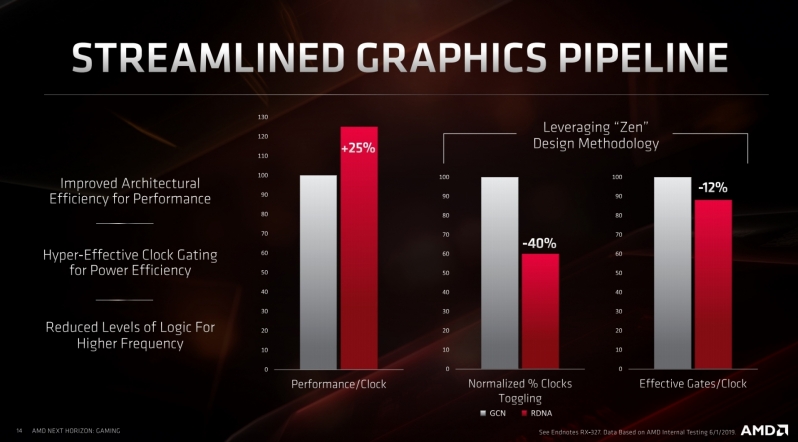 We have to take a moment to appreciate the honesty of AMD too. Some manufacturers either cherry pick what information they give you so that their product always appears better than the competition, or do anything they can so as to not belittle anything they have previously produced. AMD are very up front about the areas in which they have had past failures, as well as the areas in which they equal rather than best the competition. Openness and truthfulness go a long way with us, particularly in these dark global times. 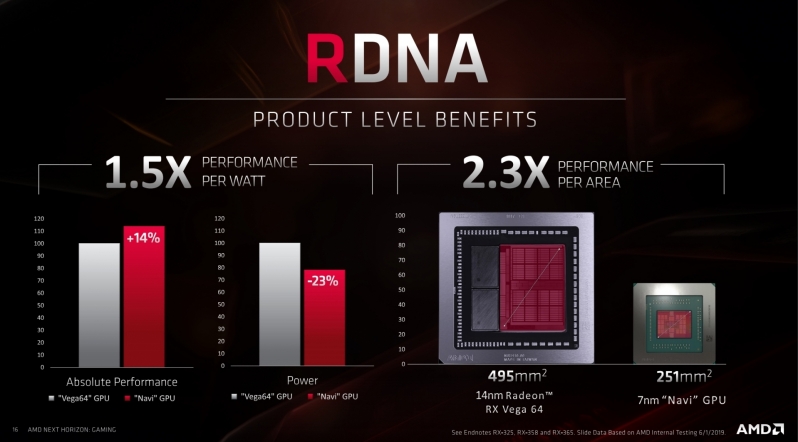 Whilst 1080 and to some extent 1440 gaming is very much a massive segment of the market, and the target the RX 5700 and RX 5700 XT aim to hit, AMD are aware that 4K gaming is a serious option, particularly with the rapid evolution in the display panel industry meaning that 4K screens are somewhat affordable. The Navi comes with AMD Radeon Image Sharpening, or RIS, which lets you render at 1440 and upscale to 4K, bringing the 1440 performance to 4K panels by by implementing an intelligent sharpening algorithm to negate any blurring that usually occurs during upscaling. If you've brought yourself a 4K screen but haven't necessarily got the hardware power to run 4K60 then it's a good compromise between the easier overheads of lower resolution and the crispness you can only get at native resolutions. 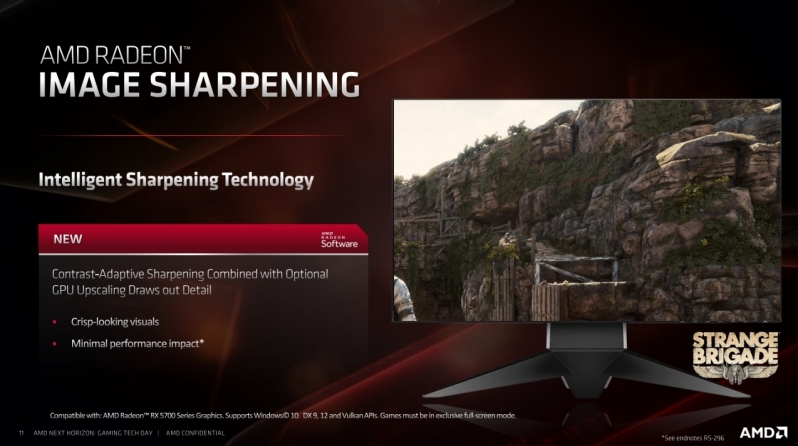 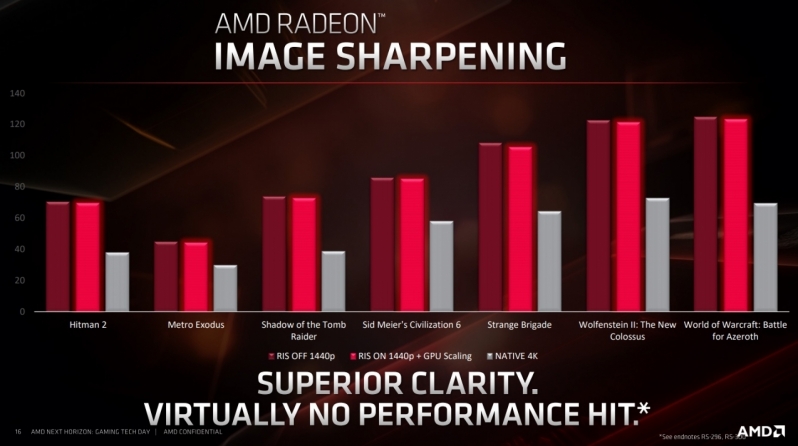