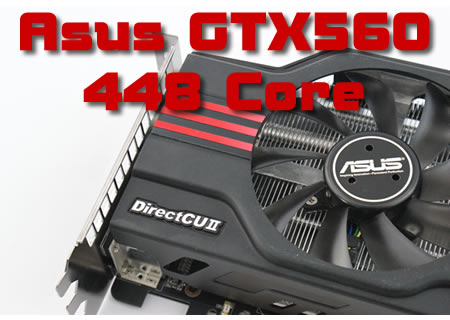 So let's get the obvious stuff out of the way early.

At stock, the ASUS is pretty much on a par with the other 448 Core cards we've tested, although because it doesn't come overclocked out of the box the MSI generally edges ahead. Although it's certainly not by any large margins. Generally at least. Overclocking capabilities are better than the Gigabyte which only made it to 800MHz, but not on a par with the excellent MSI offering which ended up hitting the 1000MHz mark. However, the results from the overclock actually made great use of the performance available, and in certain situations the 860MHz overclock we obtained gave us results as good as the MSI. The Witcher 2 was a particular highlight, getting just past 30FPS.

The abilities of the DirectCU II cooler were equally impressive. The card is quiet and maintains a degree or two below the excellent MSI offering. Unfortunately this, like so many elements of the card, requires a large asterisk and some qualification. Yes it's a bit cooler than the MSI, but this is a triple slot card. Triple. Whereas the MSI Twin Frozr III is only a dual-slot solution. However it looks amazing in situ and if you're someone who likes to show off then the ASUS is definitely ticking that box. It's massive and dominates the internals of your case.

The other big issues come with some of the results. In neither Battlefield 3, nor Batman Arkham City did the ASUS particularly impress. Given that these two games are the main marketing thrust then you'd expect that, even if it was rubbish in everything else, the GTX560Ti 448 would rock here. But the ASUS at least certainly doesn't.

That's not remotely as bad as the results we see from Dirt3 and Unigine. In both of these the ASUS DirectCU II was, even if we're being really kind, poor. Terrible would be nearer to the mark, especially in Dirt3 which is optimised so well it will run past 100 FPS on almost anything.

It's very difficult to recommend any of the GTX560Ti 448 Core cards in all honesty. The Asus is cool and quiet, but not significantly cooler or quieter than the MSI which is only dual-slot. The performance is very variable wavering between excellent and "meh". Even the overclocking is mediocre, only getting up to 860MHz but it is worth noting this is a full 60MHz above whats now increasingly looking like the substandard Gigabyte card.

Considering it's £240 that's a lot of money for a big card that performs averagely, even compared to other versions of the same thing. However, if you're someone who enjoys the reliability and excellent warranty that comes from an ASUS card, and you are more concerned about looks than performance, then this would be the one to go for. It looks way more expensive than it is. It just doesn't quite back those looks up. Its on par in some aspects but better in many others than the Gigabyte offering so we are going to award it our Silver award.

Thanks to ASUS for providing the GTX560Ti 448 Core DirectCU II for review. Discuss in our forums.

CocaCola
Thanks Tom for another great review. Seems like Asus is really big on these bulky coolers. I would still very much prefer MSI and Gigabyte's coolers for performance/silence and that they save a bit more space for parts and upgrades.

badtaylorx
i have 2 cards with the dcu ii coolers and unless you either brace them so they dont sag or have a silverstone (inverted mobo)case,,, your temps will not be anything special....

if properly installed....(asus' fault not toms) you'll have a hard time hitting 60c even cf-sli'd and oc'd....

idle temps are a pedestrian 30-33c but thats idle

Greenback
I just put watercooling on my 6870