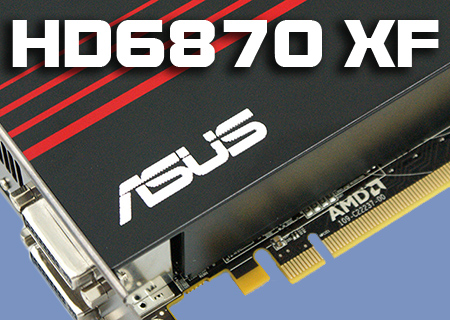 As mentioned in todays other review of the HD6870 it is intended as a replacement for the HD5830, although with increased performance using less silicon.

With an expected retail price of around £200 we just couldn't resist taking the ASUS version for a test drive. A 15MHz overclock on the core doesn't sound a lot, but it might just be enough to tip it over the edge.

For those of you who've followed us for a while you'll know how much we love getting the maximum performance possible for the lowest relative outlay. With the 5 series of ATI Radeon cards the deal was very similar as the one we saw with the 4 series, namely that two mid-range cards in Crossfire can outperform a similarly priced high-end card. With the 5 and 4 series that both consisted of the 5770 and 4770 respectively in Crossfire.

Thanks to the bizarre decision to keep the saming numbers but adjust where they fit in the scheme of things, it means that the closest we can get to it with the 6 series is two HD6870s in Crossfire. Naturally we couldn't wait to see if the trend has continued.

The ASUS version of the HD6870 is almost identical to the reference one except for a small 15MHz boost on the core speed.

Let's have a look at the pictures.

yggdrasil
You always amaze me with how quick you jump on these reviews and have them out.Quote

Zeals
That's why we all love OC3DQuote

Taurus
Great review and lets hope the 6900 series delivers the full potential of these cards!Quote

Also glad to see these push the 460 prices down