It's not until you see a comparison between a 1080P panel and the 4K goodness available here that the staggering difference in available screen space becomes apparent. Sure the idea posited here that you could play a game, watch a film and work on your Power Point presentation at the same time has about as much real world merit as Microsofts insistence that your partner moving your XBox One game to a corner of the screen and watching a film whilst you play isn't going to lead to divorce. However, the top two images are where the truth of a 4K screen really lays, and if you've ever been frantically scrolling around a photograph whilst editing it, or want to improve your workflow in video editing, then the PB287Q really has got you covered. 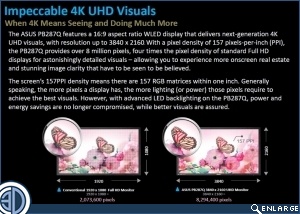 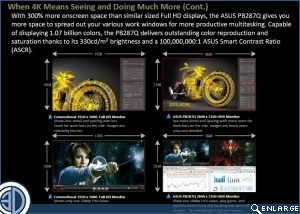 The stands supplied with your average monitor are one of our bones of contention here at OC3D towers. Ergonomics are vital, and we have the back-ache and RSI to prove it. So it's fantastic to see the PB287Q supplied with a fully adjustable stand, allowing you to place it in the perfect position. A great quality stand is around £50, so the fact ASUS include one as standard only adds to the value. Although the PB287Q does support VESA, should you have an arrangement you're already happy with. 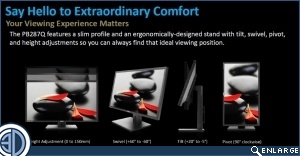 As you can see from the first slide above, the amount of pixels having to be rendered on a 4K display are massively more than those of a 1920x1080 display. Of course that's pretty obvious, but it does have an affect upon the frames per second you can achieve. To give you some idea of the setup you'll need we took our standard LGA2011 graphics card test rig and stuffed it with a selection of the current high-end graphics cards. As you can see from the graph below 3GB of VRAM is the absolute bare minimum. This is Watch Dogs hoovering up all the VRAM it can get, although it did give 84.6 FPS @ 4K on a GTX780Ti SLI setup.

Now click on to see how much GPU horsepower is required to power some other games on the PB287Q. 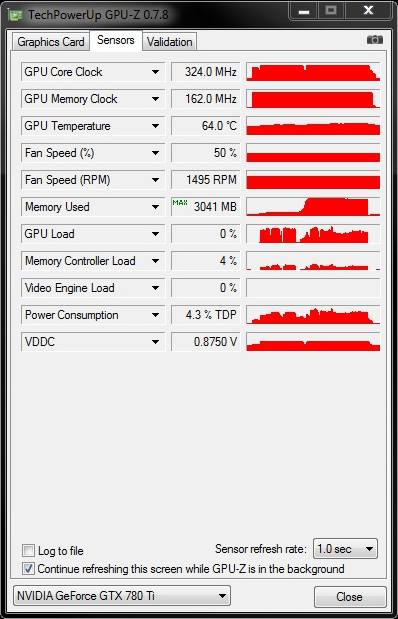 Wraith
Oooh show me your display

SieB
4K screens are starting to drop in price and the quality of them is improving, this one is a start.
Now we just need the GPUs to catch up so a single card is enough to run one 4K screen as good as they can on a 1080p one today.
Until that happens, it isn't really worth going 4K for 90% of people. By the time it does happen, 4K screens will be even cheaper and there will be better ones than the ones today.Quote

Aurelian
Very swish! And I really like the performance figures, puts into perspective just how much horsepower is going to be needed for 4k, particularly as things progress. One question though.....don't happen to have a couple of Titan's knocking around to run a test or 2 in SLI? The 295x2's only have 4GB per GPU, so the Titans could be a little experiment into the value that could be offered by something like a much mooted yet never materialising 6GB 780Ti, or even the 880 in the future.

Also, does your camera have a manual focus or focus lock? If not have you considered using a dSLR instead?Quote

looz
Does it support 120Hz with 1080p? I'm intrigued by the idea of having such a screen and doing work stuff at 4k, and then game at 1080p. There wouldn't be blurriness since at 1080p every pixel is represented by a 2x2 cluster.Quote

MacLeod
Asus is really bringing it these days with their monitors. Ive been doing some research on some wanting to upgrade my 25" HP and a lot of the top ones out there seem to be by Asus.