This is probably the first monitor around that is just as much fun to look at when it's off as when it's on. In fact if you've ever wanted an excuse to put a mirror behind your battlestation then the ASUS PG348Q is all the reason you need. Hell we love the reverse of it so much we chose it for the review image at the top of the page. The stand is a work of art, beautifully engineered and the logo light is raw enthusiast porn. It's not just about how the stand looks, or even the logo lighting our desk up, or even just how it works. Everything about it is sufficiently amazing that the price almost ceases to be an issue. We haven't even got to the best bit yet - the actual display - but suffice to say that if you ever see this in the flesh we guarantee you'll be working out which organs you can sell or exactly how you can rob a bank and get away with it. Here at OC3D we have awards for particularly silent products and innovative ones. We even have awards for ones that are so brilliant they're instantly the standard by which all others are judged. The ASUS PG348Q ROG Swift is the first product we've reviewed where we genuinely considered getting an Aesthetic Award made up. We still might.

So it looks gorgeous when it's off. When it's on though it moves into entirely new territories of awesomeness.

You might think that its curious resolution of 3440 x 1440 is an odd choice, especially in a world of 4K becoming the norm for the enthusiast offerings. However, take a step away for a moment and it makes bags of sense. Firstly, 4K might be the way that we'd all love to live our lives but you still need a GTX980Ti SLI setup to get a playable frame rate from anything other than Undertale. After all, 8.3 million pixels is a hell of a lot to shift. Whereas the PG348Qs resolution of 3440 x 1440 means it is only rendering 4.9 million pixels. You don't need to be a genius to understand that you're saving a whole 2560 x 1440 monitor's worth of rendering. So it's a hell of a lot easier on your system than a genuine 4K monitor. Secondly, because you've got a thousand pixels width extra you're getting all the benefits of increased field of view that you would previously need a triple monitor setup to achieve. The combination of the sheer physical size of the PG348Q and the slight curvature of the screen gives you an effect not dissimilar to IMAX. You don't have to turn your head because your peripheral vision is filled with the width of it. We don't want to sound like size queens but the girth of this thing made us squeal with delight when we got down to play with it.

The image quality of the screen is as impressive as everything else. Its IPS nature and mild curve mean that colours don't wash out wherever you look and from whatever angle you do so. Colours are rich but natural, blacks deeper than the Marianas Trench and thanks to the combination of 100Hz overclocking and the outstanding nVidia GSYNC support you can guarantee that the image is as smooth and free from visible tearing as the skin on your first crush. With the connections tucked away around the back, the buttons similarly out of the way without being difficult to find, and the tiny frame meaning that the particularly well-heeled could run three of these things without needing to split the image to take into account the bezel space, it's fair to say that whatever criteria you have for a monitor the ASUS PG348Q ROG Swift meets it head on and blows your expectations out of the water.

If we have to be ultra picky, and we do, then there are two obvious flaws with the ASUS PG348Q Swift. Firstly it's a grand. Cheap for what it is, but still a fair chunk of change. Secondly ASUS said we can only have this one for a few days, the memories of having it are never going to be enough!

Sell your kidneys, your grandmother, your first born. The ASUS PG348Q ROG Swift is so fantastic you'll wonder how you ever gamed without it and it easily wins our OC3D Gold Award. It would win our Aesthetic Award if we had such a thing, and we still might make one just because it's so bloody gorgeous.

You can discuss your thoughts on the ASUS PG348Q ROG Swift Monitor Review in the OC3D Forums.


While it is still a work in progress we have decided this is worth of the "Exceptional Aesthetics" award. We will update the review when the final version of the award is approved. 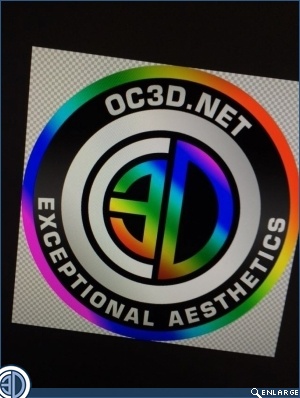 jimma47
Beautiful panel but not sold on the stand. Maybe when I see one in real life. At least it's Vesa mounting compliant

Surprised there isn't some powty brunette bent over in front of it on the boxart showing her cleavage or something.

WillSK
Quote:
Haha , I can 100% see that but I actually think it's really cool.Quote

demonking
ah man things are getting expensive!!!!! i remember my 295(gtx btw) costing about 400 and that was well over the top. a grand for a monitor though, ouch. I need a new job, or a second job and a side line of drug dealing.Quote

Doomslayer
Quote:
It might be getting expensive there, Here is getting uber expensive here atm i don't want to know what this monitor is worth when it comes out here.Quote
Reply