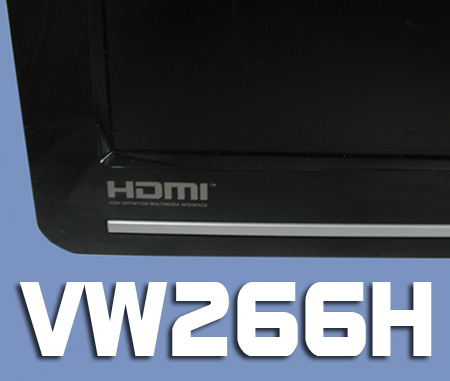 It's difficult to find a picture that fully demonstrates the difference between the five stock modes on the VW266H. Especially because they either seem to wash the colours out and crank up the brightness, or add saturation and contrast.

Scenery mode is up first and definitely goes heavy on the contrast, with not so much brightness adjustments but quite a lot of saturation. I'd assume this is designed for "scenic" things such as azure seas and rolling green fields. But a volcano is scenery and it doesn't really work so well here.

Second we have Standard which, unsurprisingly given that these were taken post calibration, gives us a good balance between retaining detail in the shadow areas and still having deep blacks to contrast against the lava. 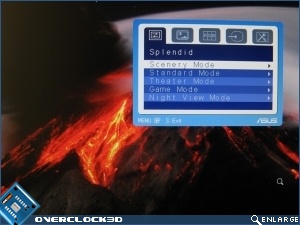 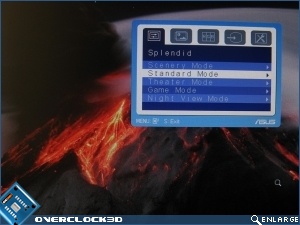 Theatre mode seems to be the Spinal Tap "None more black" version of Scenery mode with everything but brightness taken up to 11. Try watching The Dark Knight in this mode and it might give a good indication of what it's like to be partially sighted.

Game mode has a bit more contrast, a bit more brightness, and a bit more saturation over the standard settings. It's actually the closest of the four non-standard modes to something you might actually want to live with. 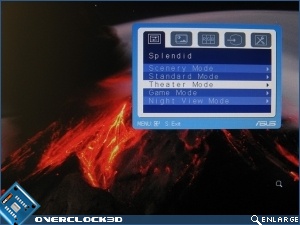 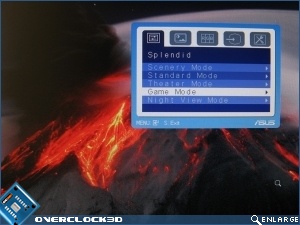 Finally Night View mode, is very similar to gamer, but with the edge taken off the brightness to try and give your eyes a rest in the darker evenings. 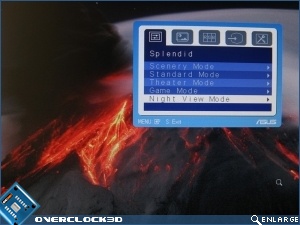 In built presets like these are more of a bother than any use. The scenery mode is pretty dark with lots of clipping going on on the histogram. The theatre mode is so dark as to entirely erase any shadow detail at all. Even the light stuff is black.

The boring answer is to just take your time calibrating the standard mode, and then leave it the hell alone because it will be great for all applications. And indeed it was.

alienware
I soooo nearly got an Asus back in January when I got my Hannspree. Thing was it was literally a neck and neck race and the Asus cost more.

Great review as always Bryan and top marks for actually bothering to show the viewing angles. I've read so many reviews now where they say "viewing angles are not very good" but don't bother to show you how good.

silenthill
Nice review, if only ASUS put a TV tuner in this monitor it would have been a great monitor which you can sit back and watch TV, I think because of the size and the ability to connect to Component (YPbPr) or HDMI for the XBOX or PS3 and even a DVD player this monitor should have been a all in one. As for games if youre sitting near it you need to set the Antialiasing on your graphic card to at least 8X because for that size monitor it would defiantly show those rough edges no matter how good the panel is, but there is a solution to this just go back to about 1m from the monitor when youre playing a game of course you will have to use a game pad but I guarantee you will have a better gaming experience.Quote

Goran
really thinking of buying this monitor for uni, can use it for a pc monitor, can plug my mac mini in for htpc, an xbox in to hdmi and a digital tuner in the component

where do you suggest buying from?Quote

tinytomlogan
Price and a link to the product is at the top of each page - CCL have it in stock fella.Quote
Reply