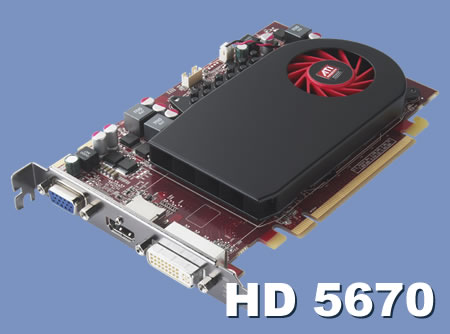 Often on OC3D we have to take the specifications from a manufacturers webpage. Today, with the HD5670 being so hot off the press that it's still sizzling, we're lucky enough to have a slide from ATI themselves demonstrating the power that this card possesses. 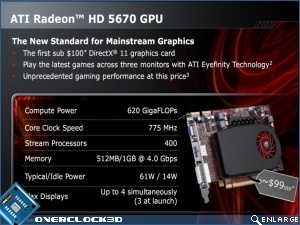 As you can see the main point of interest here is that the GigaFLOPS rating is equal to the Nvidia 9800GTX which ruled the roost for a long while in its 8800GTX guise.

None of the ATI cards have similar theoretical performance levels, although the 4830 comes closest. As we all know though, pure operations per second is only part of the story and how the card goes about handling those instructions in a streamlined manner is just as important.

The other main point is the excellent clock speed. 775mhz is up there with many of the current budget sector cards so hopefully the cooling solution will be such that the heat generated will be well exhausted to ensure good HTPC performance and maybe allow a little headroom for the value-conscious gamer.

Proving the point that clock speed, like GFLOPS, isn't everything, this is running 25mhz faster than the 5850, but I severely doubt it will even come close in performance terms.

So like many things, on paper specifications are all well and good, but the whole architecture and design is the key to performance, rather than certain big figures.

Let's take a closer look at the card.

Mul.
Looks like a very reasonable upper entry level graphics card. As a 400 stream processor GPU paired with 512/1024mb GDDR5, it screams DX11 replacement to the once loved Radeon HD 3850/3870 and GeForce 9600/8800 series and while it's specifications are dwarfed by the rest of ATi's range today, there's no getting around the fact that the graphics card is far from "slow" either.

It's performed very much as expected although I can't help but feel that the frame rate drop with Anti Aliasing is slightly abnormal, even for a graphics card of it's calibre. We'll see what future driver releases bring to the table.

A RRP is not bargain of the centure but is sensible when compared against the £105-130 pricetag for the HD 5750/5770. Aside being used as a graphics card for a machine for games, it's low power consumption/noise could make it an ideal HTPC or Workstation graphics card. Like it's bigger brothers it still seems to support up to three monitors and so it wins from a productivity perspective as well.

Edit - Retailers have posted their HD 5670's from around £70 upwards

tinytomlogan
At the time of writing no where had prices listed, £70 isnt great but still not that bad, however for £91 I cant help feeling that I would rather buy a 4870 for example, the only reason to buy this would be its size and power requirements.Quote

tinytomlogan
Its going to perform better but I personally would advise if you want to game on it to save your money and buy something better. If you dont want to game then you have no need to upgrade.Quote

Makol
I'm just looking for a upgrade on a budget.