By now we are all extremely familiar with the performance available from the range-topping (Titan notwithstanding) nVidia GTX 1080 Ti.

We've looked at all the major players since launch and discovered that the benefits of a hybrid cooling solution push the performance to even greater heights whilst also being quieter and cooler. Everything you can ask of a card.

EVGA endured a quiet period during the last generation. Anyone with even a passing interest in PC hardware will be aware of how much they have innovated and pushed the boundaries, but there was a little section of time when they almost dropped off the map whilst other manufacturers appeared full of fresh ideas and new takes upon the genre. With the release of the GTX 1080 Ti EVGA came back with a bang as their iCX technology and some very clever design touches reinvigorated their "For The Win" range.

The latest edition to that product range is the EVGA GTX 1080 Ti FTW3 Hybrid, taking the factory overclock one would expect to find on an EVGA FTW model, and marrying it to a hybrid cooler which allows the nVidia GPU Boost technology to work its magic.

It isn't just the cooler that marks the FTW3 out as a special as it also has more monitoring points than almost any other GPU we can think of as well as a fuse to save your card should you push things too far. Couple that to the RGB logo and some 'at a glance' LED indicators, and the FTW3 has plenty to place it at the top of the EVGA range. Does its performance echo this? 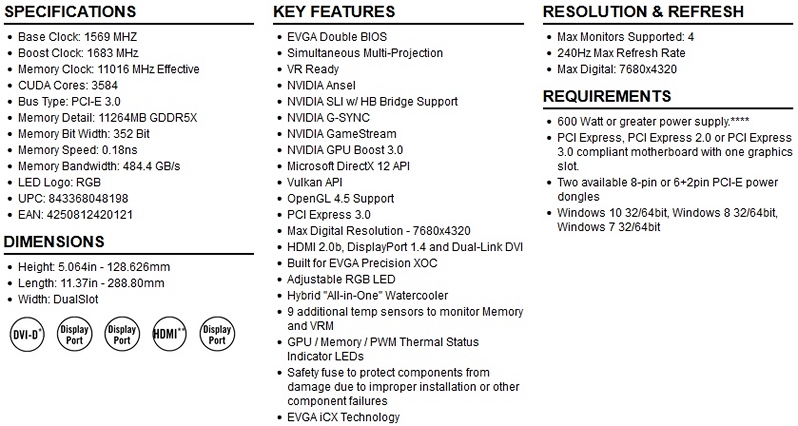 AlienALX
I quite like it but I would want a fatter rad. Well, if you are going to chase the uber clocks any way. At around 2100mhz my Titan X gets uber hot and it's got a much bigger rad than this.

It needs something like the Fury X rad IMO. Something with more volume.Quote

Bartacus
Quote:
According to the review, it tops out at 46C after an overnight run of Heaven at the highest settings. Sounds pretty good to me!Quote

AlienALX
Quote:
I don't even know how that is possible. I can hold around 2000mhz with temps in mid 50s. Mind you to be fair I did water cool my card during the hot part of the year, which was pretty darn long this year.

I should do some more testing now temps are dropping.

One thing I have noticed, though, is that this looks nothing like the original Hybrid "kit" they were selling that mysteriously vanished from the shelves. Usually when you got one you would use your cooler guts but this looks like it's all been changed.Quote

Bartacus
Maybe Tom put the PC next to an open window on a chilly evening.

JK Tom! I've never been a fan of hybrids, but that does seem like quite the effective cooling combo.Quote

AlienALX
Quote:
Well I do know that the 1080Ti does not get as hot as a Titan XP. My card is insane fast though.

I love hybrids. I've had AIOs on my GPUs for years. Would have bought an EVGA if I could tbh, could have saved myself £70. Mind you, if I add a double rad I am sure my card would haul some serious ass