Gear of War: Ultimate Edition Performance Retest - The Game has been Fixed!

When compared to the games Day 1 performance Gears of War: Ultimate Edition has made some tremendous performance improvements, finally allowing the GTX 960 and R9 380 to perform similarly. Now Gears of War: Ultimate Edition can run well on both AMD and Nvidia GPUs, which means that we can all PC gamers with DirectX 12 comparable PCs can finally have a good gaming experience.

Both AMD and Nvidia have performance improvements here, but sadly the games framerate cap at your monitors refresh is still preventing us from going above 60FPS. We are currently looking into getting a 144Hz monitor for future UWP/ Windows Store game testing, but for now we are limited to 60FPS. 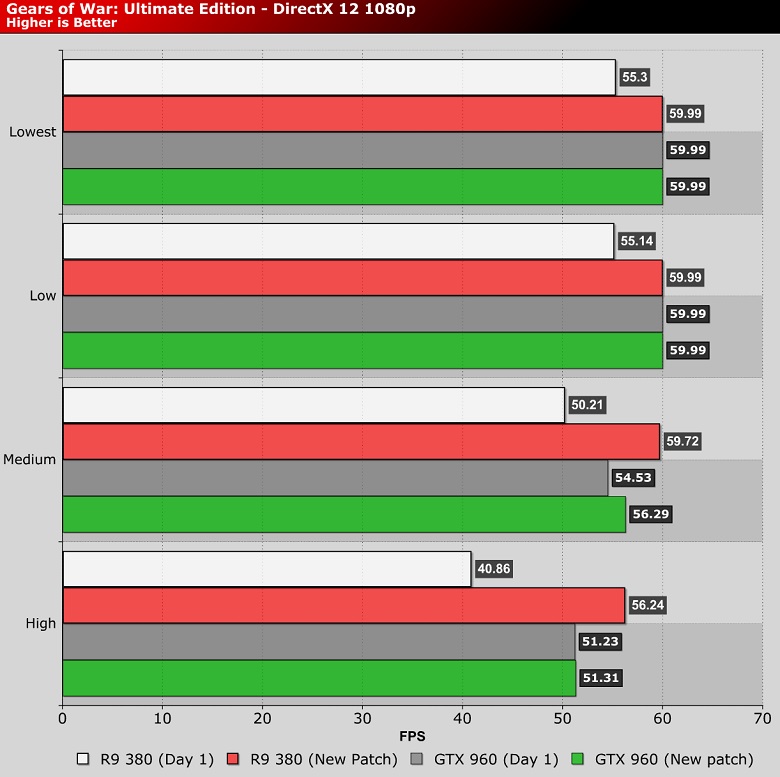 Dylzan
Quote:
All games on the Windows Store currently have forced VSync.Quote

WYP
Quote:
It is not V-Sync. the game has a framerate cap at monitor refresh. Not V-SyncQuote

vidyan
Look at that R9 380, suddenly it went from "The way its mean to be gimped" to "better than 960"Quote

Hadex
Looks like OC3D is biased towards AMD. Nvidia was faster so game was broken, now AMD is faster or ties and suddenly game is fixed. Now look at Hitman review - "AMD is simply dominant". Suddenly nothing from with that. Tides have changed and AMD gimping every game.Quote
Reply