The first two feature slides echo the information we've given you on the previous page. Although it's worth noting we didn't discuss the OSD features so we'll cover them in a moment. We do like the graphic that shows the extra pixels you get from 2560x1440 when compared to 1920x1080. It's easy to see how near the two numbers are and imagine that 1440 isn't really a big step forwards, but of course any mathematician will tell you that you get nearly double the pixels with the 1440 that you do with the 1080. 3.6 million versus 2 million. 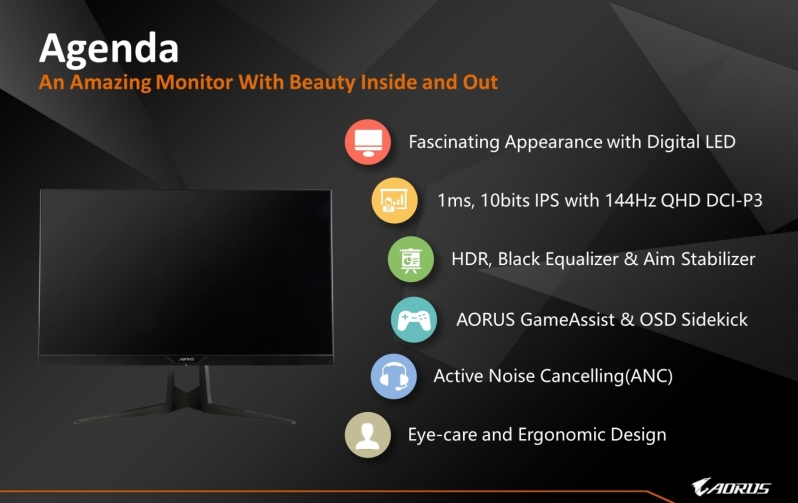 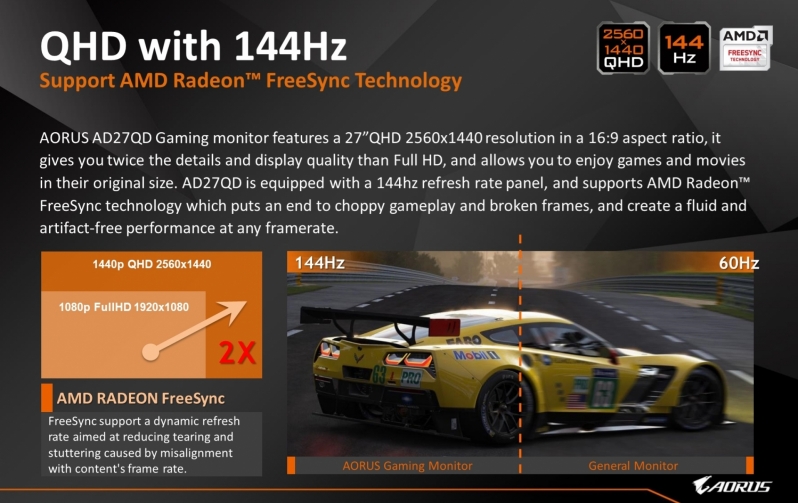 Although the quoted 1ms response time is grey to grey as it always is, every panel on earth is advertised using that standard measurement so we can't berate Gigabyte for also stretching the truth a little. Although if you only play Return of the Obra Dinn or Undertale then this grey to grey measure will be on the money. Ghosting these days is something which affects almost no panels at all, such has been the insane improvements in flat panel technology. Once you add FreeSync to the equation it's fair to say that if your display is an older flat panel then you wont believe how good they are now and how hard you'd have to work to disable enough features to get the screen to tear at all. 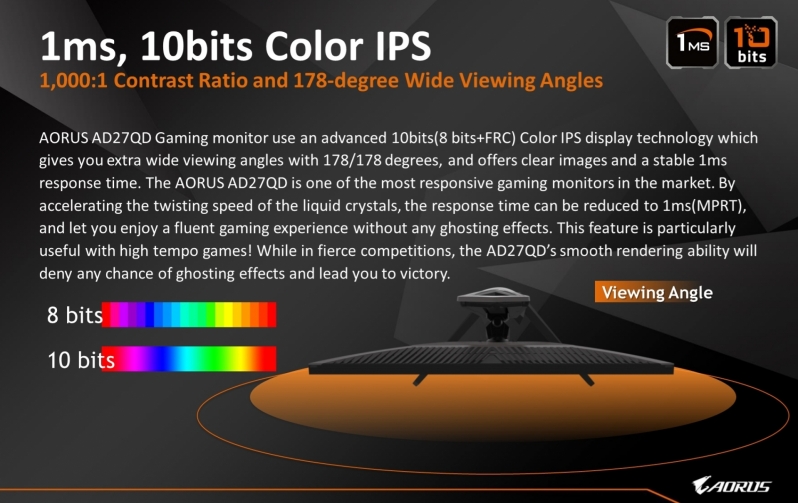 Although the market is moving towards one giant display instead of a multimonitor setup we know that financially a lot of people still buy one display and gradually increase their setup, rather than go all in on three out of the box. If this is you then you'll be delighted to know that the Gigabyte Aorus AD27QD has a built in display to let you align your displays perfectly, rather than leave it just to guesswork. 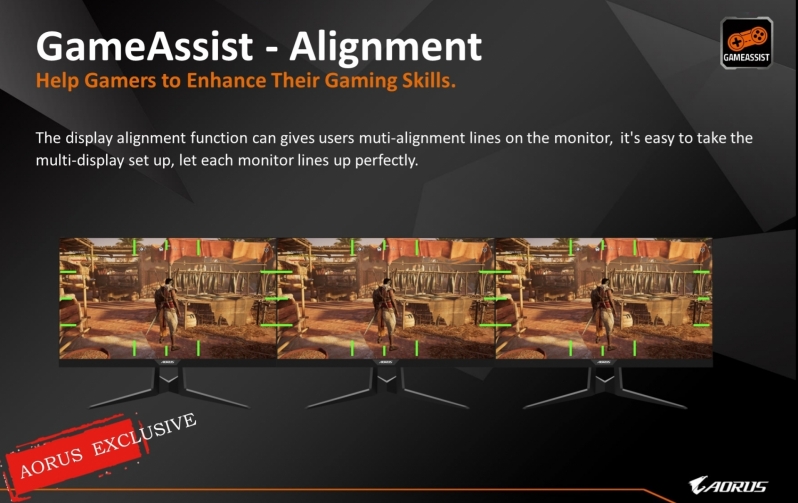 There are plenty of connection options on the AD27QD from USB through DisplayPort and HDMI inputs. With a built in power supply there is no brick to have to hide anywhere, and the On-Screen Display controls being around the back let the front side look as sleek as possible. It doesn't mean adjusting things is a pain in the bum though as you can tweak the settings from within a software package. Oh yes. 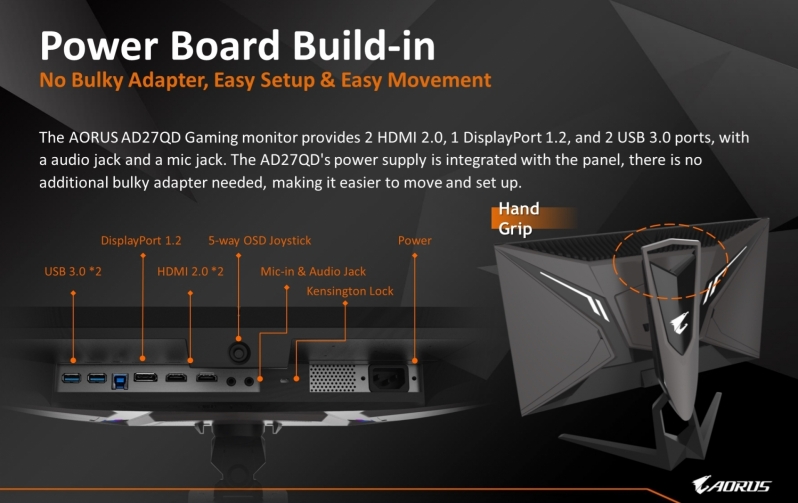 Lots of games these days come with anti-cheat features which shadow-ban or even actually ban you if they discover you're running something which enhances the UI. The Aorus has everything built into the monitor itself so it entirely bypasses any cheat detection software, perfect if you want an additional crosshair or even just to keep an eye on your hardware during those tense battles. 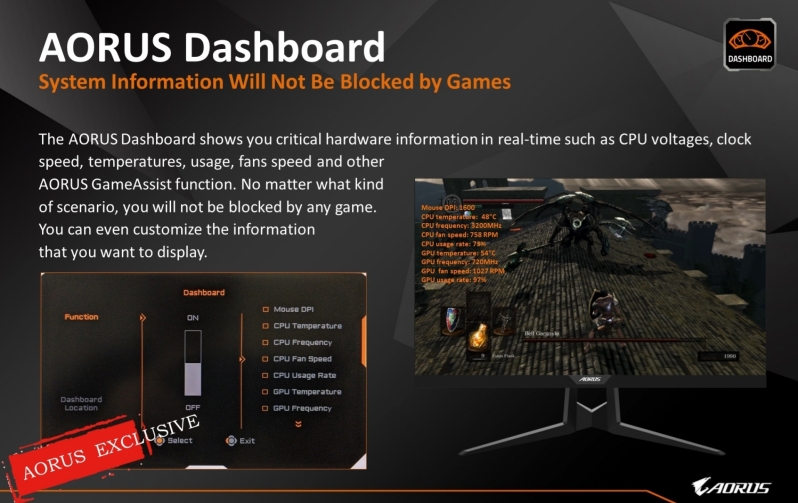 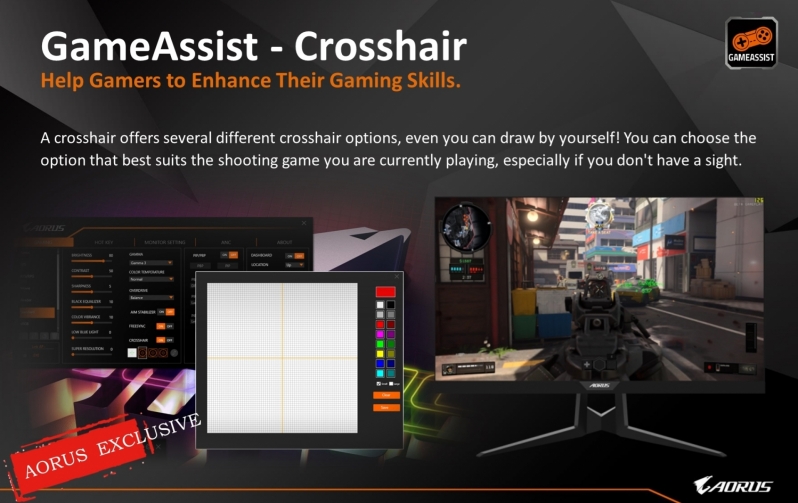 As well as HDR there is an adjustment for the blackness factor, so no longer can your enemies hide in the shadows and consider themselves free from any possible chance of a headshot. Whilst the HDR included is the HDR 400 standard, it's still a significant step up in image quality when compared to a non-HDR panel. In the same way as high resolution displays were the first big change in the market, so HDR is the next revolution. After all, it doesn't make 10% of people feel nauseous unlike VR or 3D. All benefits, no drawbacks. 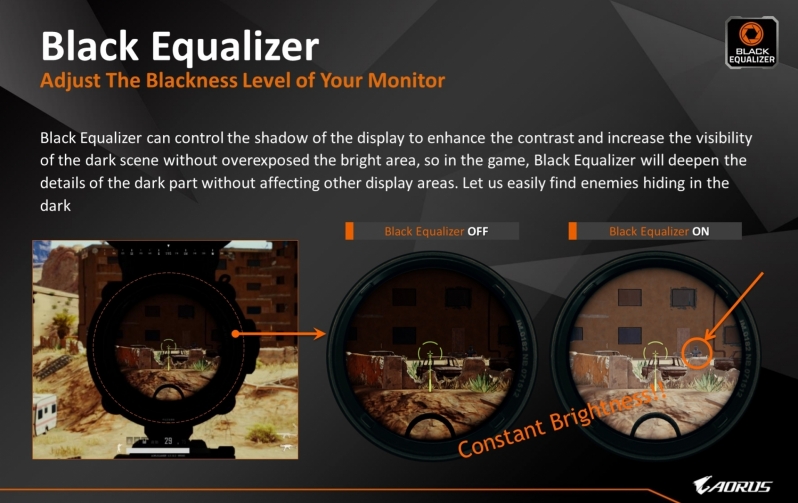 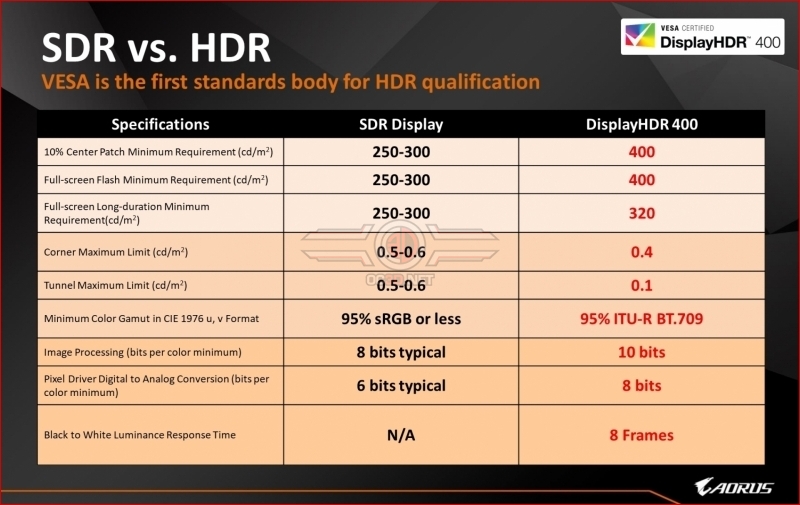 Peace Đ
I still don't know why you would integrate an aim balancer, black equalizer and a hardware rendered crosshair... Of course you can also paint a crosshair on your monitor or stick some Tesa on it, but... That's cheating; exploiting 3rd party hardware to overcome a game's design restrictions. What does the aim balancer actually do? That wasn't mentioned in the article. I guess it would eliminate any view kick, right? Making it easier to aim.


On another note, could we expect every new FreeSync monitor to be GSync Compatible as well?Quote
Reply