How you perceive the Gigabyte G27QC and G32QC depend very much on the role you want them to play and the budget you have on tap.

Naturally there will be some caveats to its capabilities and some areas where more expensive panels shine brighter, but if you go into it expecting to get a very high refresh rate - 165Hz - on a large format, large resolution panel, we think you'll be very pleased with your purchase. This is particularly true if you're a gamer. By which we don't mean you're someone who plays games, we all play games, we mean someone who almost exclusively uses their system to play games. That's the task around which the two Gaming QC monitors have been designed and the ones wherein they shine the brightest. The curved nature, which can be slightly distracting as it lends pincushion distortion to windows and photographs, falls away in the intensity of gaming. Coming at these from a non-curved life it took a little getting used to, and you do adjust, but it never really goes away. Or at least doesn't in the limited time we had with them.

Similarly the colours and brightness of the QC panels might not win any awards in the photo editing stakes, being more than usable but requiring a level of adjustment beyond the VA panels capabilities for very serious work, are perfect for the rich saturated games that are so popular, but equally in bringing lightness to the 'endless variations on brown and grey' that characterise so many games in publisher's mistaken belief that subdued palettes are for adults. It's worth mentioning that whilst both the OSD and Sidekick software give you a whole host of options, there are some serious limitations on how far you can move those sliders. For example, the black equalizer has 20 positions, but realistically 8-12 are the only ones remotely usable. Similarly the monitor has a tendency to be slightly over bright, and any attempts to tame this quickly mute the colours. It's just something to be aware of. Out of the box it's very usable indeed with only minor adjustments for personal taste needed, but if you're expecting to calibrate it to within an inch of it's life for photorealism, this is not the droid monitor you're looking for.

As always when you're dealing with such a huge pair of panels for so little money, there are some elements that aren't perfect. The Sidekick software is pretty large and installs the RGB Fusion software whether you want it to or not, and on a panel without any RGB that's a pain. The short-keys are standard Windows ones too, a pain if you've learnt them and use them a lot. The stand has no rotation nor pan feature, annoying for those of us with a love of Cave games or who just want to show other people what's on their display. The HDR is probably the thorniest issue. Remember when HD panels came out and your local shop was full of nobrand "HD Ready" TVs that were anything but? Sure they did 720, just, maybe, but they were hardly the life changing upgrade that modern HD/4K TVs are. This pair of Gigabyte Gaming monitors are at the lowest level of HDR that can still be sold as such, and it shows. Windows is not particularly HDR friendly anyway, and these QC offerings are not going to convince you it's the future. Leave it off. Treat it as a "oh I see what it can do" element rather than a deal maker. Lastly we had a small issue with text ghosting if scrolling quickly through a webpage, and high, fast black to white transitions run at the ragged edge of the VA panels capabilities, often causing the image to momentarily go darker than it should, regardless of settings.

That feels like a lot of negatives, but it isn't. It's just that you're getting a stupendous amount of panel for your money, both in physical size and resolution terms, that you just need to be realistic with your expectations. A HDR10 IPS panel of a similar size is in the four figure bracket, and this is barely four hundred. So with some light photo viewing, casual web browsing, and heavy gaming you'll be thrilled. It's at the sweet spot of resolution that doesn't require a flagship GPU to run but still looks gorgeous, it's got plenty of connectivity, a solid stand, good brightness, no dead/stuck pixels on either - and they are out of the box retail samples not carefully cherry picked review ones. If you want a massive, vision filling display either of these would go down a treat without breaking the bank. We prefer the larger one as both have the issues mentioned so you might as well get the enormous one and have a hedonistic gaming experience. 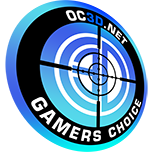 Discuss the Gigabyte QC Range in our OC3D Forums.

trawetSluaP
Very interested in the 27" version. Wonder how it compares to the Dell S2721DGF.Quote

Deadtroopers
Underwhelming. The iiyama GB3466WQSU is about the only recent display in the £350-450 bracket that has tempted me; but my daily is 2560x1600 IPS. Nowt wrong with the iiyama panel; but the lack of height at 1440 I find really, really, annoying.Quote
Reply