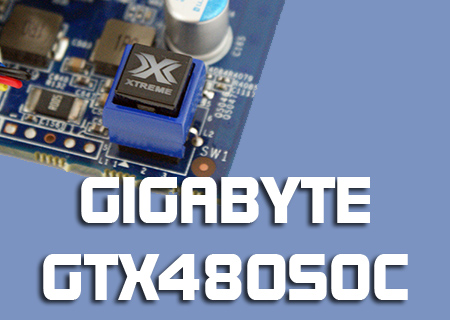 The Gigabyte comes with a very useful overclocking tool, the OC Guru. This allows adjustments of GPU and Memory speed as you'd expect, but also includes color controls and, perhaps best of all, hot key swapping. This means you can have one highly reduced profile for your desktop and with a single button combo switch to a gaming profile. 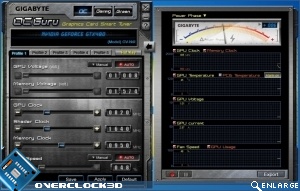 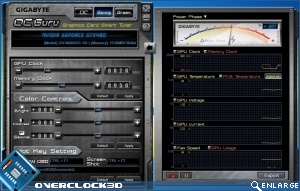 Gigabytes dedication to green computing cannot be understated either as there is a specific green mode that helps tame the GTX480 when you're in a light-use situation. As you can see from the screenshots below the power-savings between the left-hand shot and the right hand "green" shot are significant. 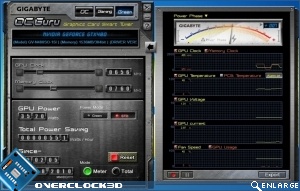 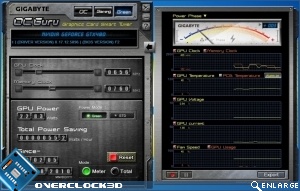 We will be comparing against the biggest challenger to the Gigabyte, the MSI GTX480 Lightning as well as the reference card. It would be pointless to compare to any AMD efforts as the GTX480 is clearly streets ahead as a single card.

Although the GTX480 Super Over Clock is miles ahead of its reference compatriot already we were still able to increase the Core still further up to 865MHz and the Memory from 950MHz to 1000MHz at stock volts! 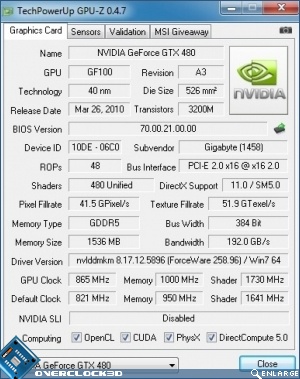 Moving our attention to increasing volts it took just 1.083v to get the card stable at 900MHz to match the Lightning overclock, team this up with a 1150MHz memory speed and you have one very powerfull overclock for not a lot of volts! You would think with this overclock at such low volts would mean we could really crank it for an insanely high final clock. Sadly we ran into a lot of driver stability issues, not full on system freezes but just the display driver crashing. Normally if you have gone past the cards limits the whole system will freeze and you know its time to stop, but the issues we ran into with this really did make us feel it wasnt the GPU core holding us back. None the less the 900mhz core on a 480 is very impressive for an aircooled card.