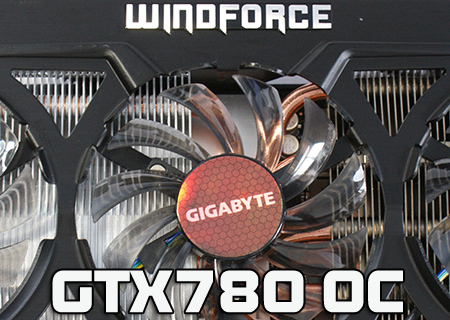 Whenever we're reviewing midrange cards we often discuss how your performance is limited by a combination of clockspeed and the architecture.

On the average card you can overclock it quite a lot and obtain a result similar to the next model up in the range, with no particular downside. However, certain games or certain benchmarks will demand a lot from the architecture of the GPU as much as the clockspeed and therefore you always reach a point at which there is no more performance to gain from overclocking, and you're reliant upon an increase in shaders or CUDA cores or memory to gain further frames per second.

With the extra cooling performance of the Gigabyte Windforce cooler enabling us to overclock this one, that gap in architecture has been overcome with pure clockspeed. This is largely because whilst there is a reduction between the GTX780 and the obscenely powerful GTX Titan, when comparing the GTX780 to any other card on the market it's a behemoth of unparalleled proportions. So much extra performance is available that all of scores scaled in a linear manner, with the reference GTX780 in third, then the stock Gigabyte card, and then the overclocked one. To the point it is often the highest rated single GPU in our graphs.

To explain why the stock Windforce card improved upon the reference one, you only need to look at the temperatures and the GPU Boost 2.0. The nVidia Forceware drivers automatically overclock the card if there is heat available to do so, and the Windforce cooler with it's near 20°C of extra headroom, is easily capable of overclocking further than the reference card is at stock.

All in all it's a close run thing between the GTX Titan and the Gigabyte GTX780 Windforce, and when overclocked the Gigabyte card can genuinely claim to be the fastest single GPU on the planet. It's a cooler, quieter version of an already insanely good graphics card, and for that reason it will surprise precisely nobody to know that it wins our OC3D Gold Award.

Thanks to Gigabyte for providing the GTX780 Windforce for review. Discuss your thoughts in the OC3D Forums.

antihero
Chill out duder, I just changed my pants.

yassarikhan786
Love the fact that Gigabyte are finally using a black PCB. I didn't particularly mind the blue PCB, but the black PCB just looks classier.

The performance increase with the overclock is very impressive indeed. The Titan seems kinda obsolete looking at the potential price difference.Quote

Now these aftermarket versions r coming out of the works, ..just ..wow. Titan performance, somtimes more somtimes less, but always damn close, for maybe £200 less. I am DEFFINATLY getting a GTX 780, probably a Gigabyte,Asus, or EVGA OC'd one. And i cant wait.

Honestlly reading the performance results i was shaking with excitement ..cant wait

yassarikhan786
Quote:
Yeah, I'm really tempted by the Gigabyte 780, seeing that I have the 580 version of the card, which is still running quite strong.Quote

Humanoid1
Although it is a great card for games, its sucks pretty bad when it comes to compute apps, even the trusty old 580 can beat it in many cases