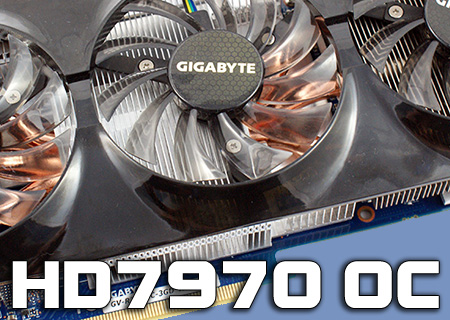 If the Gigabyte HD7970 OC can be likened to a Batman character, it's obviously Harvey Dent. It's most definitely a two faced card, but with an ace up its sleeve.

The HD7970 is a monster performer, of that there is no doubt. It's the current performance king and if you're after the biggest benchmark results then it's the only choice. Benchmarks is exactly where the Gigabyte OC shines. In 3D Mark 11 it gave the best single-GPU scores we've seen by quite a distance thanks to a combination of the 1000MHz 'stock' clock speed and that brilliant cooler which allowed us to push it to a mighty 1300MHz. Even in 3D Mark Vantage we saw some phenomenal X marks, although the P-Score wasn't quite up there with the best we've seen. Of course Unigine Heaven is about as stern a test as you're likely to see that isn't a game, and once again the extra burst of performance the Gigabyte HD7970 OC has allows it to rise to the top.

Gaming results were much less impressive. Don't be in any doubt that you'll get a whopping amount of performance out of the card and you wont at all be disappointed. But we're in very elite company here and at this high-end level those fine margins can make the difference. The Gigabyte was consistently slower in average frame-rate at stock than our reference VTX3D HD7970 despite having a 50MHz improvement in clock speed. The highest overclock we've yet obtained managed to get closer to than we saw at stock, yet still the results didn't fully bear out the amount of performance we theoretically had. It might only be three or four frames per second on average, but the fact it had consistently lower performance in gaming is a bit of a worry for those seeking ultimate power.

The absolute star of the show is the Windforce cooler. We cannot emphasise enough how quiet it is. Even when it had been running, overclocked, the extremely demanding Unigine Heaven benchmark for over an hour it was still as quiet and refined as the Noctua fans that help keep the CPU cool. It wasn't a case of everything being sacrificed on the altar of silence either, as the Windforce cooler dropped the HD7970 a whopping 10°C when compared to the reference cooler. It's stunning. Amazing.

So all in all it's a little bit of a mixed bag in that you're sacrificing a little gaming performance for the benefits of silence and coolness, along with high overclocks and big benchmark scores. Deciding what award to give it is tricky. Sure the cooler is stunning, and the synthetic benchmarks are amazing, as is the overclock. But we've seen higher gaming performance from reference cards at lower clocks, which makes you wonder what the extra MHz is doing. However we'll edge down just on to a Gold because of the magnificence of that cooler and the closeness of the performance. If another card marries the brute performance with a similarly great cooler it would leave the Gigabyte as more of a Silver, but for now it's good enough for Gold.

Thanks to Gigabyte for supplying the HD7970 OC for review. Discuss in our forums.

Steenie
A shame to see the blue PCB, despite seeing early pics with a black PCB...

still considering a 7950/Kepler (after TTL reviews of course!) upgrade in the future!Quote

FPSandreas
what is the difference between the blue and dark PCB

I just bought this for gaming and that is its weakest site, damn

Could it be that Tom had a "bad" version or just out of luck to get a good gpu like you see with some cpu when you start to oc??Quote

Beattie
Hello, nice review on it

i got this yesterday one question though, did the one you got make a buzzing sound under load?

because mine does but its great other then the buzzin as soon as i quit bf3 it stopps buzzing :s i may have to take it back if not

its all running fine BF3 maxed out getting anywhere from 50 - 90 fps on stock.Quote

Rastalovich
I think it's more than time the performance going down when a card is overclocked is seriously looked at.

If you're a Batman fan, you still save your cash and get a 560ti.. it's crazy what optimizing for one game can do.