We're sure that anyone with half an interest in the new Ampere GPU from Nvidia will be aware that the RTX 3080 is an absolute beast. Not only does it out-perform the RTX 2080 Ti that was the object of desire for the hardcore gamers over the last two years, but it does so at a significant price cut when compared to that particular card. In fact it's priced around the upper end of the RTX 2080 Super range.

Whilst we admire the Nvidia Founders Edition we are aware that most of you prefer to go with a manufacturers card, either for the improved cooling or just for the simplicity of having the same hardware throughout your rig and thus eliminating any conflicts between the many lighting/control programs that come with every modern piece of hardware.

Today sees the launch of the partner editions of the RTX 3080, and Gigabyte have a few different models up their sleeve with varying degrees of lighting and factory overclocks available. We're taking a look at the middle of their non-Aorus range, the Gaming OC 10G. It's the third card we're looking at chronologically - although they'll all be appearing at once as far as you're concerned - and the third different power configuration. The Nvidia card had a single 12 pin power input, the MSI had three 8 pin powers, whilst the Gaming OC 10G has two 8 pin PCIe power inputs.

Gigabyte haven't yet released their core clock speeds, although of course we'll find those out in a couple of pages time as soon as we plug it in. Therefore this table largely shows the difference between the Gaming OC 10G and the Founders Edition Nvidia card to be that the Gigabyte offering has an extra HDMI 2.1 port. HDMI 2.1 is a big upgrade to the HDMI you're used to and supports up to 8K resolution @ 60 Hz. With the refresh rate potential increasing massively as you tone down the resolution. 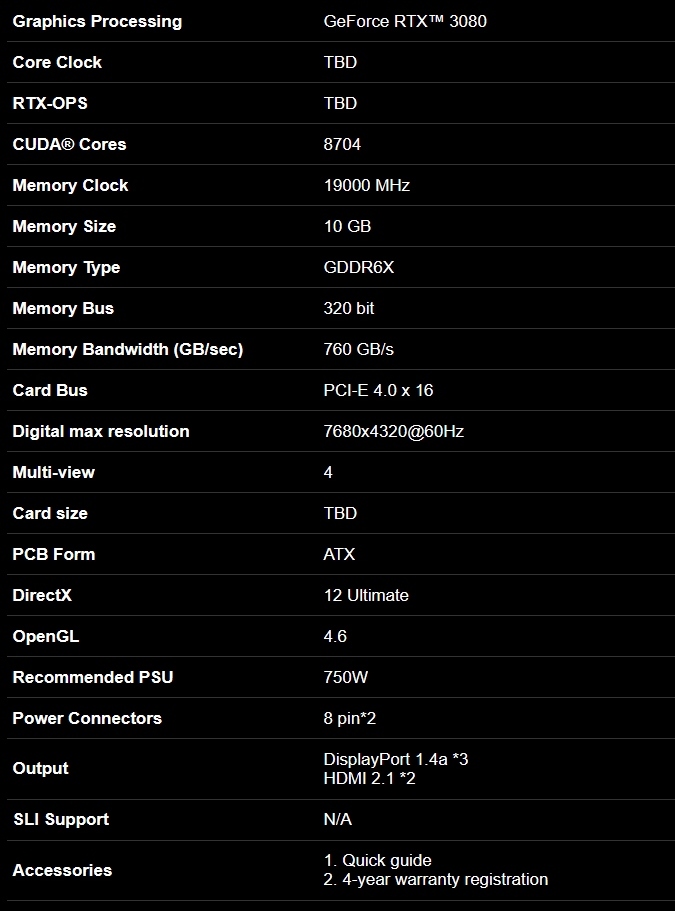 Kaapstad
Thanks for all the hard work Tom it must have taken a lot of time and long hours to do the testing, I will link these reviews over at OcUK when their site starts working again.Quote

AlienALX
I echo the above. Thanks Guv.Quote

Not to detract from that, there is zero here or in the other two that makes me stifle the yawns. Coolers with the last fan half/three-quarters overhanging and all, TUF apart, tacky placcy. If all the partner cards are going to be this naff, if I pull the trigger it will be FE all the way; if I need more performance or to keep the heat down, I'll put a block on it.Quote
Reply