Now for the meat of the differences. Whilst the SLI fingers will give it away for those of you who've read everything up to now, the more obvious difference is thanks to the 14GB GDDR6X difference between the 10GB RTX 3080 and 24GB RTX 3090. The 3080 has one memory module above the GPU whilst the 3090 has 3 above it. 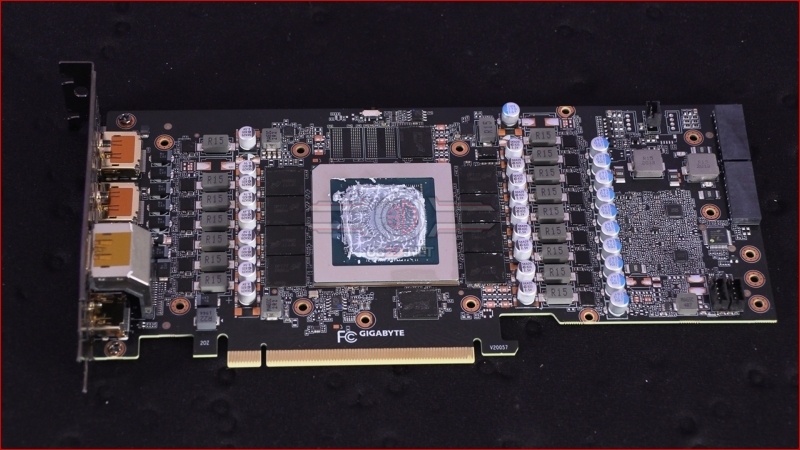 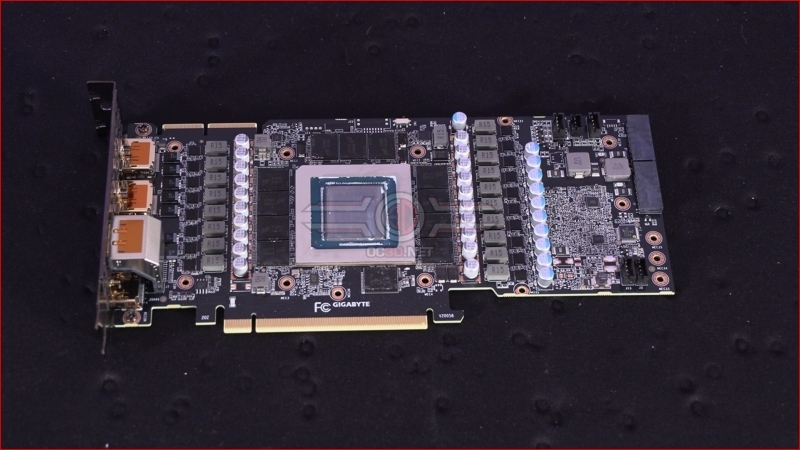 Another detail becomes clearer when you place the two naked PCBs side by side. At the top right, behind the power inputs there are three headers on the RTX 3090 - top - but only one on the RTX 3080. However, both these cards only have one actually connected here from the Windforce 3X, so perhaps the RTX 3090 Gaming PCB will be repurposed for an all-singing and dancing Aorus model down the road. Or maybe on that exists already but we haven't been sent yet. 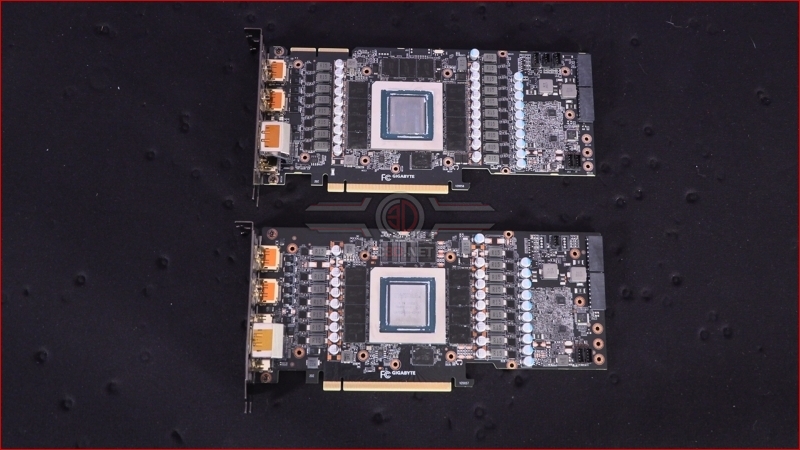 Around the back it is much clearer which card is which. Not only are the SLI fingers more visible, but whereas the front of the RTX 3080 had 10 memory chips compared to the 3090's twelve, here it's 12 plays zero in favour of the RTX 3090. Additionally the extra power phases on the RTX 3090 have necessitated some jiggery pokery to the left of those GDDR6X chips (to the right of the GPU in the above image, but obviously things are flipped as we're on the reverse), and also there is more solder at the very top right as we look at it, again to do with the capacitors on the flagship card. 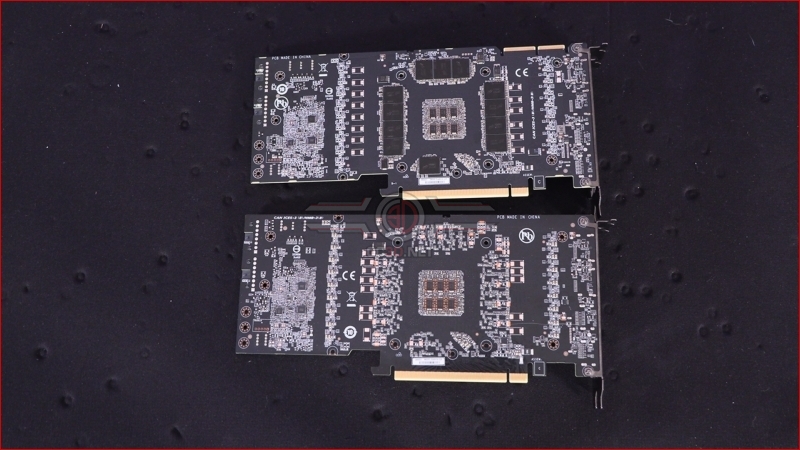 Here it is in close up on the front, with the RTX 3080 being on the ... altogether now.. left. That's right. Because of the SLI fingers. Well done. There is more power on the RTX 3090 too, and that shows up in the amount of capacitors. 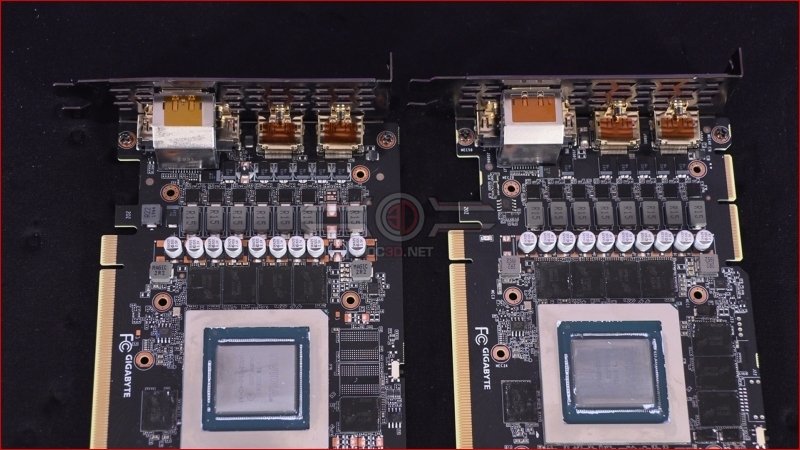 You can see the extra headers at the bottom right of the card here too, left blank on the RTX 3080 with only the middle one used. The biggest difference between the Gigabyte PCBs and the reference design is that Gigabyte use the lower profile capacitors, which mean that those of you seeking a third party water cooling solution will need to be aware that you'll not be able to use a reference based block. 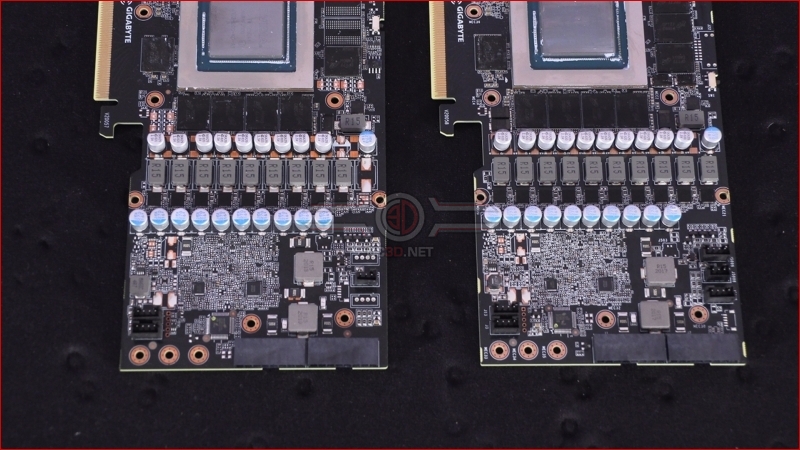 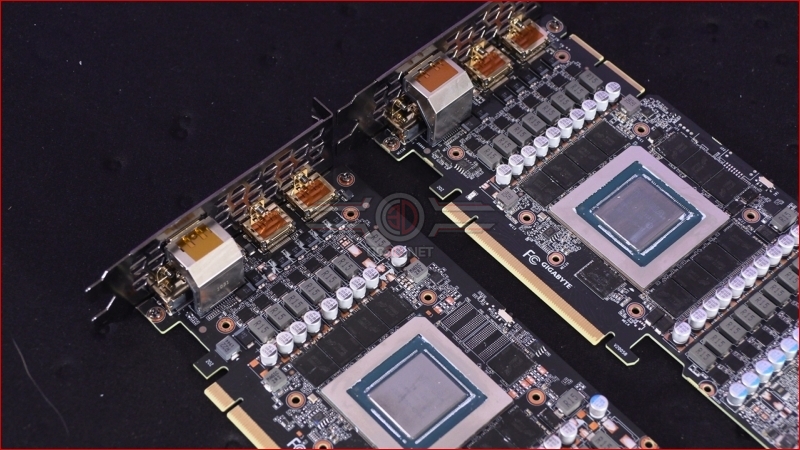 Lastly we'll leave you with the kind of image that makes for a perfect wallpaper. Now we've got to put these back together again. Whilst we do that let us know your thoughts in the OC3D Forums.