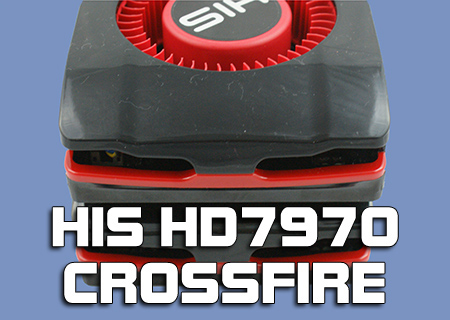 If you're running two of these bad boys then you definitely need to be running triple screens to get the most out of them. On more than one occasion the extra card made no difference at all to the final frame-rates we saw in games, but it nearly always helped when running at the extreme 5760x1080 resolution of Eyefinity.

That isn't to say that there aren't any issues. Indeed this is one of the more tricky dual card runs we've done. By no fault of HIS Digital we hasten to add. Rather it seems that the drivers are once again the Achilles Heel of the Radeon set up. One day AMD will sit down and realise that it doesn't matter how amazing your hardware gurus are at designing a graphics card when your software guys appear terminally incapable of coding drivers that just work. Sure the poor quality of Catalyst drivers when compared to their ForceWare opponents is so well known it's almost a standing joke, but it's been that way since we can remember and with such an epic product as the HD7970 it's frankly not good enough. Hopefully in the weeks and months to come the game developers and the AMD driver team will lock them selves in a room with a tanker full of Starbucks and not emerge until all the creases are ironed out. We live in hope.

Battlefield 3 wouldn't run at all, The Witcher 2, Resident Evil 5, Dirt 3 and Batman Arkham City all showed better performance with a single card than the Crossfire set up. These aren't games based upon the same engine, nor from similar developers or even in the same genre. If you are buying a pair of these for your favourite game it's definitely worth checking that Crossfire works properly.

However, getting off of our soapbox and looking at those scenarios in which the Crossfire did work properly the results were incredible. It was comprehensively better than a GTX580 SLI setup, which is the same price and has ruled the performance roost since they were released. AMD have made a major leap forwards, producing a setup that, for £800 can give you some of the most eye-poppingly smooth gameplay you could ever hope to see.

So if you are in the market for incredible performance, but don't mind the fact that once again you're stuck with the pretty risible Catalyst drivers then this set up is definitely worth a look. When it works it's unbeatable. It's just not as 'plug and play' as we've come to expect from modern hardware.

For this reason we're awarding it our OC3D Performance Award. As a single card the HIS Digital is as good, and Gold worthy, as any other reference HD7970. In Crossfire though it's a bit pricey and a bit temperamental till the drivers are ironed out.

Thanks to HIS Digital for providing the HD7970s for review. Discuss in our forums.

Excalabur50
Wow nice to see AMD back on top at least for now.Quote

dipzy
This is only the begining, can't wait to see the performance of the mega 7990 when its released

Slighty a high price but considering its the fastest single card for now its pretty good.

Nvidia need to bring their next gen cards out, i hope theres a glimps of them at this years CES 2012Quote

CocaCola
XFire with this card is just amazing. Will have to wait and see what future update/fixes and driver releases will accomplish for the new AMD cards. Hoping they will give nVidia some competition this time.