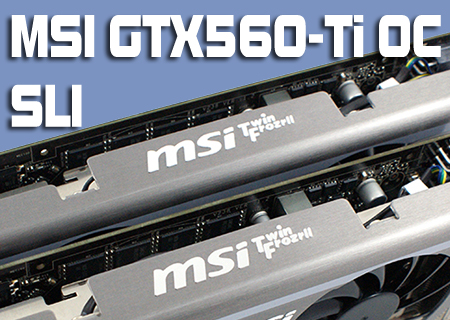 At the start we said how often it proves that two medium graphics cards in SLI are usually a better purchase than a single top-end one and so it proves once again.

Price is always the factor in choosing a graphics card and it's the one area where, to a point, you really get what you pay for. Motherboards by and large give the same performance and for gaming the difference between, for example, a i7-920 and a i7-990X aren't as much as you'd expect. But graphics cards most definitely can give massive gains for only a little extra outlay. The two MSI GTX560-Ti OC cards we have today are around £200 each, and so you've got £400 worth of GPU performance to play with. This is much less than you'd pay for a GTX590 or HD6990, and only a little more than a single GTX580 would set you back.

For that though you're getting two pre-overclocked cards with the outstanding MSI Twin Frozr II cooler. Our love for this cooler is well known and it never fails to deliver. Even in SLI it kept the cards cool and quiet which is something that certainly can't be applied to the AMD cards it's up against. It is obviously louder than a single card though and there are power considerations to be taken into account too, but you'd struggle to find a pair of graphics cards that remain as untroubled as these two.

Performance is incredible at all but the highest levels of image-quality. Throughout the testing MSI GTX560-Ti OC SLI setup was as good as its name is lengthy. It comprehensively smashed the GTX580 and was up with the GTX 590 in nearly every test too. Equally it happily took on a variety of cards from AMD and wasn't disgraced at all. Just shy of 40000 P-Score in 3D Mark Vantage is great for the money and our gaming tests continued to surprise us with the level of performance the cards gave.

Only in one instance did we find the MSI unable to provide what we hoped and that was, as to be expected, Crysis Warhead. With everything up to the stops it really struggled to provide anything other than a slideshow, despite every other setup on test happily providing a playable experience. However if you're willing to give up a minuscule amount of image quality and drop from 16xQ AA down to 8xQ AA then the limitations of the GTX560 architecture are overcome and everything returns to being smoother than buttered teflon. One thing the results have made us wonder is if the cards struggle with games like Warhead maxed out would they again struggle with multiple screens? At this present moment in time we can not give any results to back it up but we would wajor the OC3D caffeine fund to say it would and the settings would have to get dropped significantly below what a 580 or 590 would play happily at.

There are many options available as a graphics solution for about £400 and many of them will give great performance. The MSI GTX560-Ti OC should be on anyone's short-list as the combination of performance in all situations, factory overclock, and the Twin Frozr II cooler give exceptional value for money and a quiet, trouble-free experience.

Slightly off topic but keep your eyes peeled at the end of the week when our next competition goes live, where you will get a chance to win a pair of MSI GTX560's just like we have tested here today and also a chance to win one of MSI's flagship P67 B3 overclocking motherboards the Big Bang Marshall! All details will be released very soon!

Thanks to MSI for providing the cards for today's review. Discuss in our forums.

SieB
My review withdrawal systems are cured, thanks, Bryan

So for £400 a whole £150+ less than a 590/6990 you can get similar performance, not bad if you ask me. Sacrificing some AA in one game shouldn't really put you off and anyone with an AMD card can only have up to a maximum of 8x AA anyway.

If you have the money for a 590 that would ideally be the better option in the long run but if you are on a budget SLI MSI 560 TI's is a pretty damn good alternative.

Zeals
No tinkering with overclocks?Quote

Karlos_the_n00b
Quote:
Maybe, but don't forget that two 570's in SLI aren't listed in the bench results and there are many on the forums that speculate that they would be a better alternative to a 590. If your not looking for a single slot solution that is.

piotrekhc
One is enough for 98% of games out there, but who would say No to two of them