We've got a two part review of the RTX 2070 here for you today, with the MSI RTX 2070 Armor the first and most affordable of the two.

The Gaming Z is equipped with the Twin Frozr 7 cooler consisting of a thick heat sink with its alternating wave pattern fins and two beefy fans. This allows MSI to supply the Gaming Z with a serious factory overclock that should give it a significant performance boost over its Armor brother, and also surround the fans with enough RGB lighting to make the card look its very best and add a nice glow to your system.

We know that you've probably already read the Armor review, so let's get down to brass tacks.

The RTX 2080Ti definitely changed the game when it comes to smooth frame rates in HDR 4K, being the first card capable of over 60FPS in nearly every title. Naturally the reduced core count of the 2080 meant it wasn't quite as impressive at the higher resolutions. However, the RTX 2070 isn't aimed at those of you who expect 60 FPS in 4K titles, but instead is more aimed at those who want the benefits of the Tensing Cores and RT feature set at more modest resolutions. When compared to the GTX 1070 that preceded it, the RTX 2070 has bumped the floating point shader performance up from 6.5 TFLOPS to 7.9 TFLOPS.

In comparison to the MSI RTX 2070 Armor the Gaming Z sees a significant factory overclock, boosting the core by 200 MHz whilst the cooler has been heavily revised to include all the latest thinking from MSI in the form of the Twin Frozr 7 with its TORX 3.0 fans and Wave heat sink fins. 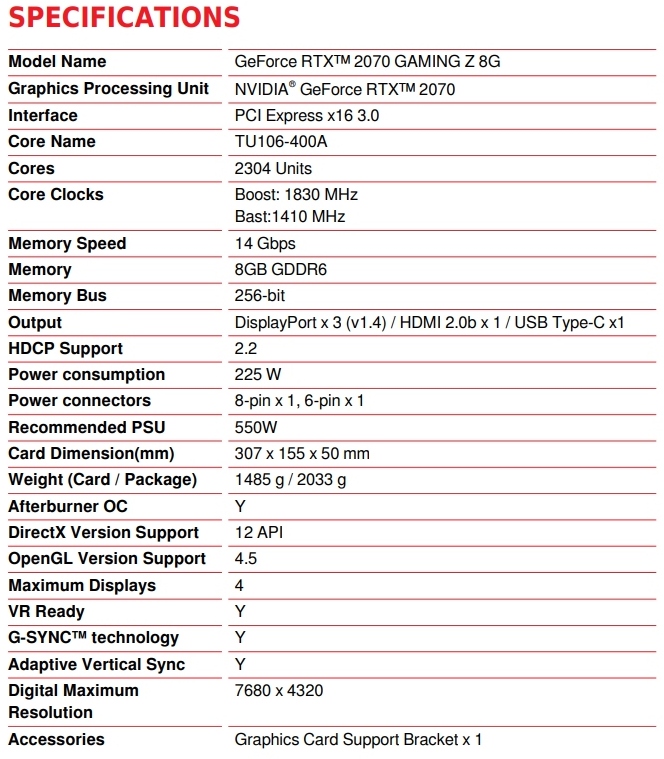 Excalabur50
Thanks for the review!
These cards are nice, and for those who want raytracing but can't stretch to a 2080/ti but want performance seems like these are the way to go.Quote
Reply