There are many places to start, but we think the name needs some explanation just to stop you spending the rest of this preview wondering if MSI can't spell supreme or not.

SUPRIM then. What exactly does it mean? It's an acronym.

SUperior, MSI commit to superior experience
PRofound, the journey to this point
IMpossible, redefining what you consider to be.

I mean, we get the idea. Not sure it's what we'd pick but hey it's only a name. As long as the product itself gets the job done then who cares what's on the box? Or in this case the backplate of the card.

Although MSI don't say so, judging from the commitment to throwing all they have to offer at the SUPRIM we think you need to consider these as replacements for their famous Lightning cards. i.e they are a pair that are very much for the elitist, must own the absolute best, people and not for casual purchasers. In these current pandemic days it's difficult to get hold of anything it seems. The RTX cards are still out of stock almost everywhere, the new AMD Radeon RX cards and Ryzen 5000 CPUs are similarly rare, whilst the launch of the PS5 - today at time of writing - has shown that the whole of the UK had maybe 6 PS5s, all of which seemed to have been sent to reviewers rather than the public. It's been a frustrating time for all, and to see MSI launching two premium - RTX 3080 SUPRIM X has an MSRP of £810 whilst the RTX 3090 SUPRIM X weighs in at £1660 - cards feels like a slap in the face to all those people patiently waiting for their regular MSI RTX cards to appear. Yes you can have an RTX tomorrow, as long as you don't mind paying a serious premium. At least with the SUPRIM X you're getting a premium card for your extra cash, rather than just making scalpers rich. Bit frustrating though for all of us patiently waiting.

Available in regular SUPRIM form and also in SUPRIM X, as we have here today, there is a lot going on so let's do our usual preview and give you a guide to what's going on under the hood as well as how the two cards look in the flesh. Ready?

The SUPRIM are like a what's what of high end thinking. The famous Tri Frozr cooler is here in 2S guise starting off with an aluminium shroud surrounding TORX 4.0 fans which have even higher air pressure than the previous generation, and that is on top of many heatpipes and thick, high fin density heatsinks, all of which is mounted to an extra thick, 2oz copper PCB. With Dual-BIOS that defaults to silent mode out of the box for the quietest user experience, but also offers a gaming mode for the performance hardcore, there is plenty to talk about as we show the cards off. 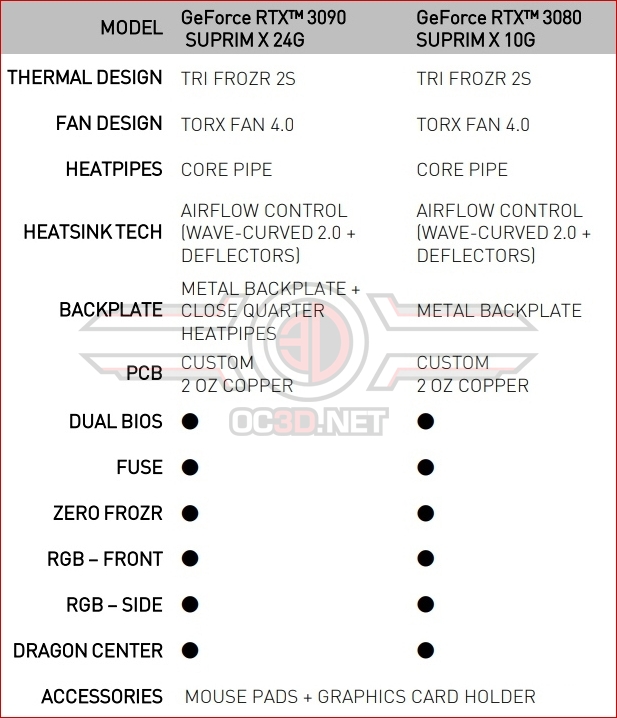 Deadtroopers
With your explanation I'd actually be more inclined to buy the MSI model over the rest, but it would still be putting money in Ngreedia's pockets so it'll be a Red Team card and if MSI put a good one out I'll look favourably on that come Easter. If they do I hope they make a better fist of the naming and the edge logos. If I were to buy an MSI 380/390 I'd blank those logos pronto. Barring that it looks a nice piece of engineering on MSI's part and I do hope they send them back to you for review when the dust settles. Chin, chin.Quote

Kaapstad
I think AIB partners are going to be rushing to get their higher end cards out the door ASAP because the prospect of NVidia doing a 7nm TSMC refresh of Ampere gaming cards could leave them high and dry with expensive designs that no one wants.Quote

Deadtroopers
This is a known known. AMD/NVIDIA will both be playing Rock, Scissors, Paper. This time though AMD have closed the gap to vanishing and are already working on 5nm if I'm not mistaken.Quote

AngryGoldfish
Yeah, I can see the next two years being very competitive. Nvidia will move to 7nm with Ampere and AMD will move to 5nm for RDNA3. AMD are suggesting it'll be out by the end of 2021, but I highly doubt that. I can imagine it'll be well into 2022 before we see RDNA3 on 5nm. Ampere on 7nm, if it's true, will likely be out much sooner and cause AMD to be behind again for a good few months. But I can see RDNA3 being a reversal of that trend. And then Nvidia will release Hopper and the cycle will continue.Quote
Reply