When you've been around hardware as long as we have, it could be easy to end up blind to the needs of the majority of people. Anyone who sat through Wednesday's Windows 10 conference will understand what we mean. Augmented reality and shouting at your PC indeed. Yeah like that will catch on any time soon. Ahem. The point though is that people so often wonder whether they can do something, they rarely stop to think if they should. Equally banzai graphics cards are such a part of our daily life that we forget that the majority of gaming PCs utilise mid-priced GPUs.

The GTX660, for example, is still the most popular GPU found in computers on Steam. The userbase for World of Warcraft, League of Legends and other "x of x" titles is far higher than the amount of people playing Project Cars or other insane looking games. It's the price and performance sweet spot. One only has to look at the explosion in Independent games with pseudo 8-bit graphics to know how popular they can be, and with the failure of so many recent AAA titles the importance of decent looking, but amazing playing, games cannot be denied.

We always feel that graphics is the area of your system where you'll obtain the biggest noticeable return for your investment, so to us we'd always go for whatever the next model down is. Whether that's a R9 290 or a GTX970, that's where the biggest savings and yet best performance is to be had. You can't argue with the numbers though, and that's why nVidia have released the GTX960 and aimed it squarely at those of you whose graphics card can remember when Whitney Houston was alive and England was still hoping the Olympics wouldn't suck too badly, then you will need to pay attention. 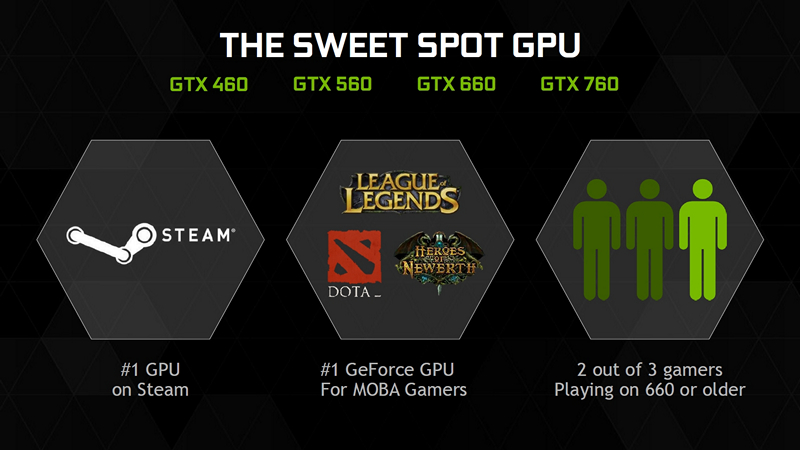 As you can see, those of us fortunate enough to have a high end graphics card in our systems are most definitely in the minority. But then with LoL and DotA2 dominating eSports, there isn't much call for lunatic GPUs.

What everyone wants is affordable, powerful, efficient graphics cards. We know from previous experience of the Maxwell architecture that it is most definitely efficient and doesn't require a massive amount of power.