The Nvidia RTX cards have brought new visual fidelity to the market with their combination of the RT and Tensor cores.

The RT Cores are dedicated ray tracing cores that provide genuine light reflection and hugely improve the visuals in titles that support it, whilst the Tensor cores work as an AI that allow Super Sampling and all its glorious lack of jaggies without any of the performance hit usually associated with anti-aliasing. Indeed the few titles that we've seen with DLSS capabilities actually run faster and smoother with it enabled than with no anti-aliasing at all, such is the power of the Turing GPU.

Until now we've seen the flagship RTX 2080Ti and RTX 2080, both of which, the Ti in particular, are capable of over 60 FPS @ 4K, something previously unheard of on a single GPU. They do have a price-tag to match that premium level of performance though. The RTX 2070 was more aimed at those who game at 1440P and, whilst more affordable, still isn't in the mainstream sector of the marketplace.

Anyone who pays any attention to the data churned out by Steam about the hardware and resolutions people use will know that no matter how much the advertisers will tell you 4K is where it's at and anything less is pointless, the reality is that the majority of gamers still use 1080P for their gaming, as it provides the perfect blend of resolution for sharp images but without requiring a second mortgage to fund the hardware necessary for a smooth gaming experience.

The RTX 2060 then is the perfect candidate, being affordable enough to bring the RT and DLSS technologies to the masses, whilst still having plenty of grunt to run this most popular resolution.

Nvidia, as they often do, compare the specifications of the same model from the previous generation with the new one to better show how far and fast it has evolved. Their wording though indicates that they expect the RTX 2060 to challenge the performance of the GTX 1080 at 1920x1080 resolutions, and we're very curious as to whether it lives up to this lofty claim. Certainly their statement in the press package that it "runs Battlefield V with RT and nearly 60 FPS at 1080P with full Ultra settings" indicates that the RTX 2060 shouldn't want for power. 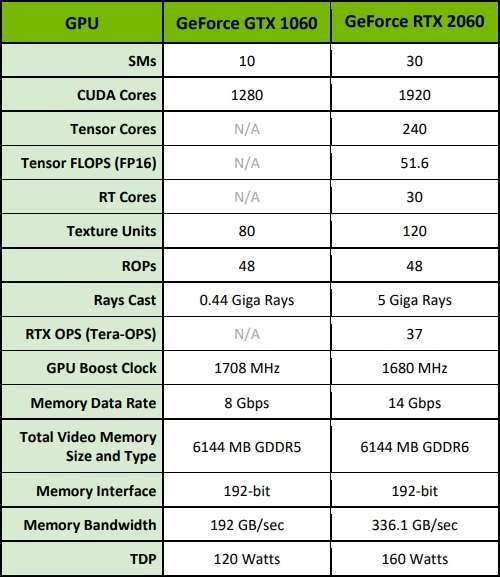 AngryGoldfish
I think this is the best graphics card we've had in a while. It's actually improved price/performance while also reducing TDP slightly. Even the cooler has improved. It performs roughly on par with the GTX 1080 in older DX11 games that usually favoured Nvidia's older Pascal architecture, but slightly beats the 1080 in newer DX12 games. The price isn't great, but it's an improvement over the previous generation and I'll take it. AMD is missing a big market here, but I understand they have to wait until 7nm can be manufactured on a large enough scale on a budget.Quote

A lot of this data can be seen on the Steam hardware survey.

trawetSluaP
It's really surprising to me that 1440p only makes up 4%! Thought it'd be much higher.

On topic the card looks like a very good option!Quote
Reply