Like a good horror movie, if you've recently splashed the cash on an RTX 2080 then now is a good time to look away, or perhaps read this review from behind the sofa. The latest Nvidia architecture, Ampere, is here and we're beginning our reviews with the middle of the three upcoming cards, the RTX 3080 Founders Edition.

Until now the Founders Edition (hereafter FE) has been similar to a reference card - the design that Nvidia would like other companies to follow - but the RTX 3080 FE is it's own thing and a serious deviation from the design ethos that has characterised cards up until now. But we're getting ahead of ourselves.

When the Turing RTX cards first appeared there was a lot of discussion about how useful the Ray Tracing and AI features of the card were in the real world. In the same way that many people resisted the lure of SSDs before they became so mainstream you couldn't ignore them, so the movement of both consoles and PC graphics cards towards Ray Tracing demonstrate how Nvidia were ahead of the curve and the Luddites had as much chance of dismissing the benefits DLSS and RT brought to the party as the aforementioned did in smashing looms. If the RTX Turing cards were a proof of concept it was a concept that attracted the attention of all the big players in the gaming world. Both Microsoft and Sony are bringing Ray Tracing to their next consoles, whilst AMD are implementing Ray Tracing onto their next Navi card. Nvidia are never ones to sit still though, and understanding that their cards required even more horsepower they have returned to the design of the Turing cards and made them bigger, better, faster, more. The Ampere is like an RTX 2xxx on steroids.

Whilst architecture is one thing, and we'll get to that in a moment, the one element that we absolutely love, and the reason for our introduction today, is the massive slashing of the price/performance scale. Yesterday you had to spend £1200 to get an RTX 2080 Ti. Today, for £700, you can get a card that bests it in performance. We mentioned a lot about how overpriced the flagship 2080 cards were, and the sales figures of the RTX 2080 Super and RTX 2070 demonstrate how the public felt too, so for Nvidia to bring a card with higher performance for nowhere near the cost immediately renders the Turing cards obsolete. Moore's Law in full effect.

We've got some slides to go through, and then we'll show you the card in the flesh before we get down to the performance benchmarks. We've even revitalised our GPU test rig to bring it back up to date and utilise the full PCI Express 4.0 bandwidth. All of which we'll discuss in a few pages time. First, how does the RTX 3080 compare to the RTX 2080 Super in raw specifications?

As we know through long experience, a dry set of specifications doesn't really tell the whole story of anything. Yes you can stuff more onto something, but how you use it is what really matters. Technological advances make almost as much of a difference as adding more things, which is why you can get a Ford Focus with the same horsepower as the Magnum PI Ferrari. The Ampere architecture takes the lessons learnt from the Turing architecture to improve the existing cores, whilst also giving significantly more of those cores in all but the Tensor versions. 50% more memory bandwidth shows off the heights of the GDDR6X and new RTX IO. 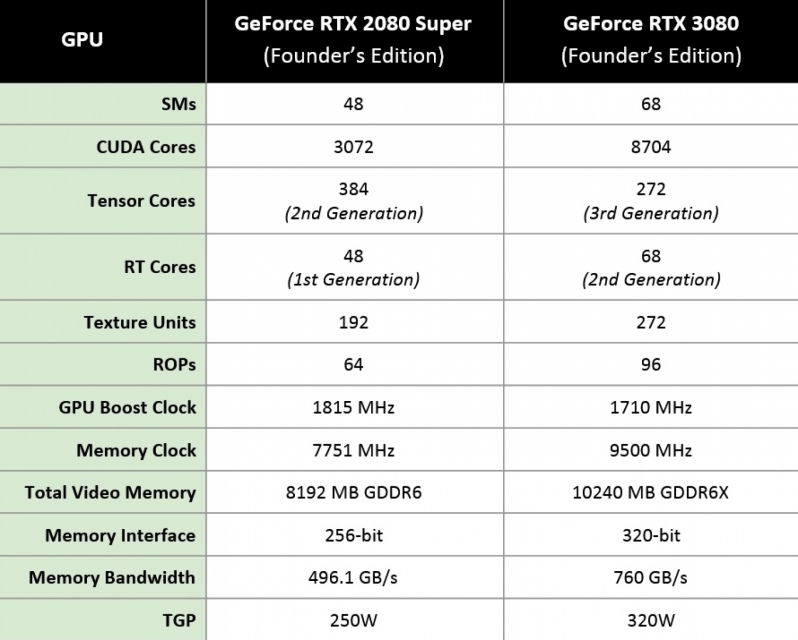 We think this is what they call a hero shot. Clear product image, all the important facts. It's a wallet loosening image to be sure. 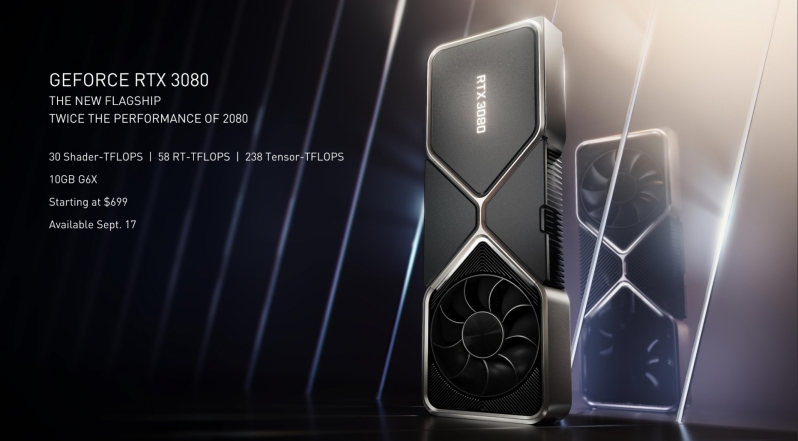 If you've managed to avoid the Nvidia press, including here at OC3D, about the new RTX Ampere cards then here it all is in a handy, at a glance, chart. If you're happy knowing the bare minimum then we'll see you on our test setup and overclocking page, for everyone else let's get a look in closer detail at some of these features as well as seeing the RTX 3080 FE in the flesh. 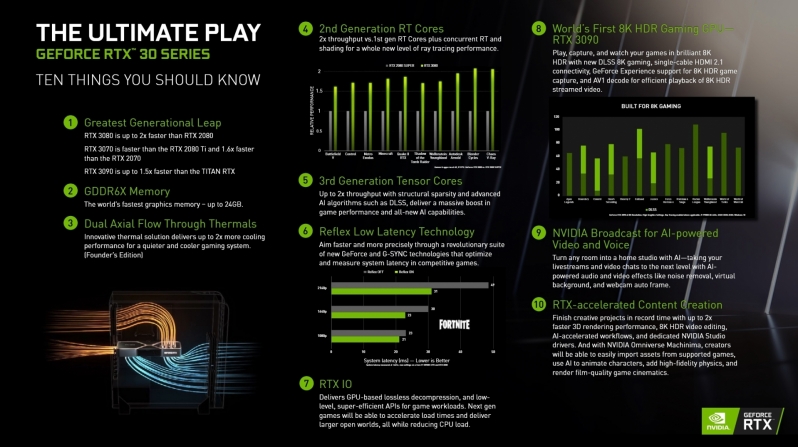