As part of our testing methodology here at OC3D we tend to compare apples to apples, in the best possible scenario, on the harshest titles. Because of the way the industry works it usually means that when a new foundation appears from a manufacturer we never get two products which are identical in everything but the underlying hardware.

With the Palit Game Rock range we've finally managed to have both a RTX 3080 and RTX 3080 Ti in identical formats to test against each other, and so we thought it might be the perfect opportunity to not only show what the difference between the Ti and regular RTX 3080 would be. As we're only comparing those two cards we can also try out some of the more popular games or, at least, ones that most people probably own thanks to bundles and the like, and see how the performance stacks up.

Both of the cards are the Palit Game Rock models, and indeed both are the factory overclocked OC ones, which means that this is about as identical as it's possible to get anything and a great way to see if the Ti really has got plenty more performance when you're not running games which are designed to bring cards to their knees. Although we might have a couple of those too.

Our regular test setup is as serious as we can get so that we can be as sure as possible that the graphics cards won't become CPU limited. For today though we're stepping back a tiny bit on the CPU to something that's easier to get hold of and thus more affordable, in the hopes that it better represents the sort of systems you might actually own. 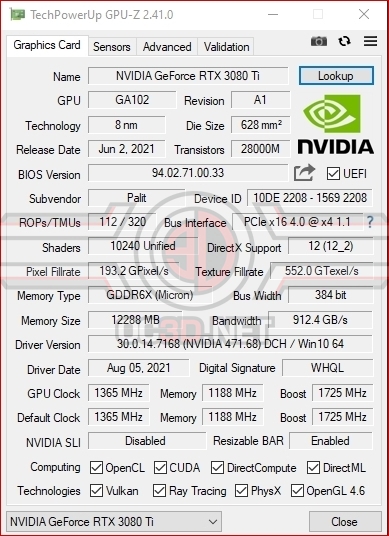 Let's check out some games.