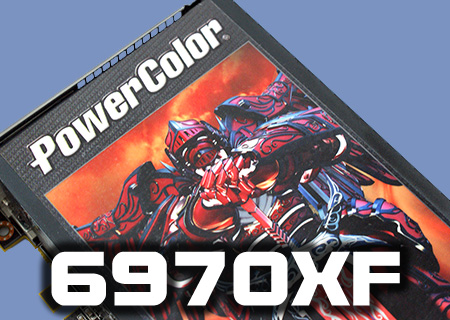 This job is an odd one sometimes.

Those who dream of it think it's all about playing with big boys toys and having a blast. When you explain to them that we don't get time to play at all because every review has to be done precisely enough to ensure all the results are valid and there is only so many times you can watch 3D Mark loop or run through the same bit of Crysis Warhead before you'd kill to play Freecell.

Everyone else wonders how we manage to stay motivated when you're looking at the next in an endless line of identical reference cards and trying to find something new to say.

To answer them both together, it's reviews like the PowerColor HD6970 Crossfire that do both. We'd spent so long waiting for the big-guns of the AMD line-up to appear that when it did and was 'alright' it was tough to eradicate the general ennui we felt. So you can forgive us if we approached the Crossfire review with a sense of trepidation.

However, to finalise the above thoughts, when something performs so well it's exactly the battery recharge that keeps up coming back for more day after day and the PowerColor HD6970XF is exactly that.

The performance is nothing short of stunning for a setup that's only just north of £550. It wouldn't have been long ago that £1200 worth of GPU hardware would just about have been enough to get these kind of frame-rates, especially out of Crysis Warhead, yet here we are with two cards that are taking on, and keeping up with, the very best in the world.

The few tests that the considerably pricier GTX580SLI setup comes out on top are ones where the HD6970XF is already pushing out huge numbers and the difference is pretty meaningless.

Over 70FPS in Metro 2033, over 60 in Crysis Warhead when everything is utterly maxed out, the best scores we've ever seen in Unigine and great scaling performance as we saw in 3D Mark 11, there really isn't much this setup doesn't do well.

It's especially impressive when you realise that it's a Core i7-950 cheaper than the nVidia setup with very little 'real world' difference. Certainly nothing that you'd notice with vSync on.

One thing has become clear this week and that is that we should all pretend the HD6870 never happened and rejoice in the great performance of the latest sub-£300 card from AMD.

Raw polygon munching performance coupled to reasonable heat and noise is enough to see the PowerColor HD6970 Crossfire get the OC3D Silver Award for the cards and our Performance award for being exceptionally fast on a sensible dual-GPU budget.

Thanks to PowerColor for providing the cards for today's review. Discuss in our forums.