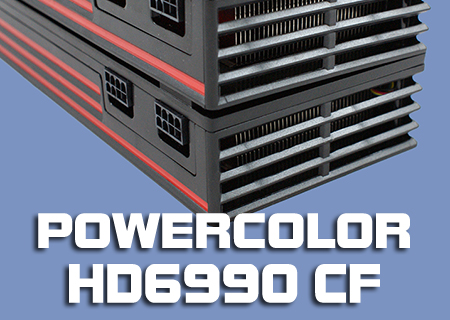 Phew. What a hell of a bunch of results. It's rare that we come across a product that leaves us breathless. Frustrated, but breathless.

Let me take you for a little stroll into an apt comparison for a moment. Racing Drivers are separated into the quick and the slow. That's all that really matters. Sure it's important that they don't wreck every race, but in general speed trumps reliability when analysing raw talent. You can teach a super-fast guy to not crash as much, but it's infinitely harder to teach a slow guy to be quick. You've either got it or you haven't. Rough edges can always be trimmed.

Welcome back. That's the HD6990 in a nutshell. It's like a hyper-talented Rookie. Sure it's brutally hot and loud. In a war between this and the reference GTX480 we're not sure which would be the louder and hotter of the two. But... but...

Like that hypothetical Rookie driver, its speed is innate. Rip the reference cooler off and hand the PCB to the tuners, and we guarantee you'll spend the next week picking carpet fluff off your chin from where your jaw keeps hitting the floor.

That flaw is nothing to do with PowerColor though. Anyone who has even a tiny bit of experience with them knows that their PCS+ and PCS++ variants always deliver and we're positive that in this case it'll be no different.

Strap two of these beasts together and you'll never be found wanting. With a multi-monitor setup you will definitely be in gaming heaven. If you haven't got multiple monitors then it's very debatable if you'll make the most out of the Quadfire HD6990s. Although of course if you've a thousand smackers to lay down on a GPU setup it's very likely you've already got at least an Eyefinity setup, if not the 5 monitor setup capable with the PowerColor HD6990.

There is no doubt that if you want performance capable of stopping every passer by within 10 miles, the PowerColor HD6990 is the card for you. But personally, we'll advice holding out for the non-reference models with an alternative cooler equipped.

Thanks to PowerColor for providing the HD6990s for our Crossfire review. Discuss in our forums.

Hribi
I wonder how it would perform in wather cooled conditions? Uderwise nice card, but a little hot and loud for my taste

dugdiamond
very nice - but however rich i think i am, i cannot justify paying over £1000 for two cards, just for an upped framerate.

although, on their own, they handle the benches very well, considering that they are dual gpu cards.

i think AMD have also overpriced them, as they offer no new technology. for that price i would expect DX12 (whatever/whenever that may be)

wraithien
Wow it might be expensive but crossfire performance is insane though that's a hell of a lot of money for two graphics card regardless of performance.Quote
Reply