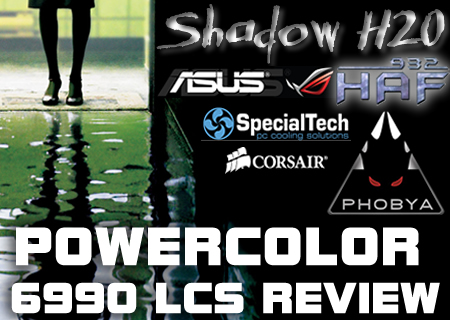 When we first reviewed the HD6990 back in March we found it to be an absolute powerhouse of a card. Amazing performance let down enormously by a truly woeful cooler that made a hell of a lot of noise but didn't really do the cooling part well.

Since then we've seen the GTX590 which was around the same power but with infinitely better cooling, and now we've got the PowerColor HD6990 LCS. All the power of the HD6990 but with none of the noise.

Of course the main benefit we've seen from the switch to liquid cooling, heat and noise aside, is the ability to really clock this card hard. It seems to find itself free from the shackles once you head towards the 1GHz mark and the benchmarks back this up.

The inclusion of a factory fitted EK Waterblock is a good one. It would be tempting to fit some generic block to try and keep the profit margin up there, but by using the EK we have one of the premier water-blocks, with all the safety and worry-free ownership that a manufacturer fitted block and the subsequent retention of the warranty gives.

In fact the only setup that consistently beats the PowerColor is a GTX580 SLI one. Therein lies the main decision to be made. Because the HD6990 is already an expensive card the water-block fitting pushes the PowerColor into the price realms of a GTX580 setup. So if you've already got a water-loop and want a card, this is clearly the chappy. If you're just looking for the ultimate performance then it's tough to look past the GTX580 SLI.

Either way if you've got a mattress stuffed full of fifty pound notes and are wondering what to spend it on, the PowerColor HD6990 LCS is a mighty powerful card that fixes all of the problems of the reference design and an easy winner of the OC3D Gold Award.

Thanks to PowerColor for supplying the HD6990 LCS for review. Discuss in our forums.

Rastalovich
I'd just like to add that h20 added expense to one side, graphic cards with water blocks on them look very sexeh !

(Results in the oc3d reviews are still troubling me, especially when you look at same cards with better settings, where, to be fair, they really can't be slower.)

Ultra damn fast fps for sure. No quality and physx for me tho.

I actually thought it would be more expensive.Quote

Zeals
First off, nice review as always. Do love how the card has a full cover waterblock =D.

Personally I think any card that comes with a waterblock by default should have some sort of voltage tweaking so you can better exploit the extra cooling potential.

Also on the side note:

If you're a fan of the Infinity Ward shooter then you have nothing to worry about here, or to be honest with any card. WTF

murphy7801
I think I will be sticking with me pair of asus direct cuII gtx 580's.Quote

I just don't get it, why amd let this noise pass through their testing ?.. Why are they so damn lazy ?.. What the crap ?..Quote
Reply