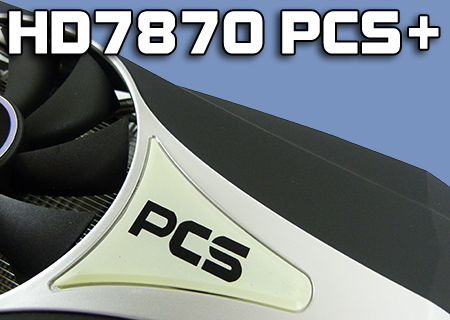 There is a heck of a lot to like about the HD7870 PCS+ from PowerColor.

Let's start with the things they have no control over. The HD7870 follows on from the HD7950 in that it's quite surprisingly close to the next model up in the range. For a long while at the top end of the range manufacturers have left ever larger performance gaps to try and justify their exorbitant pricing, whilst the low end of the market saw so many cards released that it was nearly impossible to find any real differences in either performance or pricing, such was the overlap. Now with the current range of Radeons we see that each card neatly follows the rest. An overclocked HD7870 is about the same as a stock HD7950 which, when overclocked, is about the same as a HD7970. Anything that stops people overspending in these hard times is a good thing in our book.

As for the PowerColor side of the equation we have a lot to like. Firstly we know only too well how many of you don't want to faff about with overclocking your card and will always look for one that comes out of the box with a blazing speed attached to it. The PCS+ variant of the HD7870 certainly does with its 1100MHz GPU core speed and 1225MHz GDDR5.

Although it's easy to overclock the card still further, it's just a shame the overclock doesn't really give us quite the extra performance we usually see. This is largely because the card is already heavily overclocked and we were resisting the temptation to overvolt it because most people who like to overclock in a hardcore style prefer to do so with the reference models rather than one which is already tuned.

The cooler deserves special praise. Not only is it very aesthetically pleasing, being a nice simple blend of silver and black, free from the shouty stickers or go faster stripes that plague some other cards, but the silence is staggering. It's unbelievably quiet. Not quiet compared to other graphics cards. Just quiet compared to, well, anything. The two 140mm low-RPM fans on the Silver Arrow CPU cooler were louder than the PowerColor PCS+ HD7870, even when it was under heavy loading. If you place as much value upon your ears as you do upon the eye candy, then you're in for a treat.

Pricing is exactly where you'd expect. There is about £100 between a factory overclocked HD7970 and the HD7950, and a further £80 between that and this card, which we expect to retail around the £275 mark. You're getting a lot of card for the money with the factory overclock, low temperatures, and the sheer silence are certainly worth a premium over a reference card.

The combination of those factors means the PowerColor HD7870 PCS+ is worthy of our Gold Award.

Thanks to PowerColor for providing the HD7870 PCS+ for review. Discuss in our forums.

SieB
The 7870 is the only next gen card that is worth the price to performance ratio in my opinion, especially given the overclockabillity to the level of a stock 7950, still more than they should be but definitely good cards.Quote

Firstly we know only too well how many of you don't want to faff about with overclocking your card and will always look for one that comes out of the box with a blazing speed attached to it.

I'd hope that's not too true.Quote