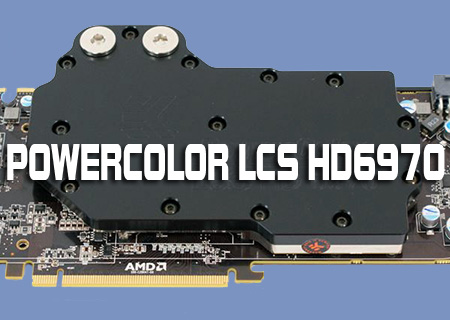 It's no secret that when we reviewed the HD6970 we were disappointed. After the lofty heights of the HD5870, the HD6970 was too loud, too hot and kinda ho-hum performance.

Improved versions fixed the performance issues, but the heat and noise were still intolerable.

Now thanks to PowerColor we have a card that in one fell swoop has decimated the competition and placed itself atop the AMD single-GPU charts.

Out of the box it's fast enough, but with water keeping everything chilled, even in this glorious weather we're experiencing, the overclocking limit ended up being the chip itself rather than a thermal issue. Even then we got right up to a hair shy of 1100 MHz and the performance just kept on coming. It's easily the fastest HD6970 we've tested.

Speed, impressive though it is, isn't the star of the show. No Sir. The most impressive factor is how well the full-cover block works at keeping everything frosty. A whole days running of Unigine at maximum settings couldn't push the temperature past 48°C which, we're sure you'll agree, isn't warm at all. Hell we've seen cards that idle at around that.

Noise is equally suppressed because you're not attempting to keep a tiny bit of copper cool with a single fan. Instead, with the enormous surface area available in radiators and thermal benefits of liquid cooling, you just need a breeze across your radiator so can use quiet 120mm fans.

Obviously there is a price to pay for a factory fitted waterblock, but whereas most companies know that only the enthusiasts will have a water-loop and price their products at a level where you feel they need a pistol and a mask, the PowerColor LCS HD6970 is only £20 more than the price of buying a card and block and doing it yourself would be, at £360. Not only is the hassle of fitting the waterblock taken out of your hands but because it's factory fitted you still get the excellent PowerColor warranty to give you piece of mind. Maximum kudos to PowerColor for not taking the Highwayman approach to the pricing on the LCS.

It's a stunning product and one we happily give our OC3D Gold Award to.

Thanks to PowerColor for providing the LCS HD6970 for review. Discuss in our forums.

SieB
I must admit i'm impressed. After the first review of the 6970 with an air cooler the 6970 seemed pointless but this version is definietly worth the money especially after looking at the performance results.

Karlos_the_n00b
Always liked the look of this. Watercooling without the warranty voiding.

Hope you get to do a review of the 6990 version when its released.Quote

MxFScotch
Yeah just tweaking my xfx 6970 that I put a xspc razor block on a few days ago. Sitting at 950mhz and 1425 on the ram amazing what watercooling can do. This card running heaven never breaches 53 Degrees. That's in loop with one 360 rad and a 950 cpu @ 4.0 ghz.Quote

Mark26
Would love one of these too add too my rig