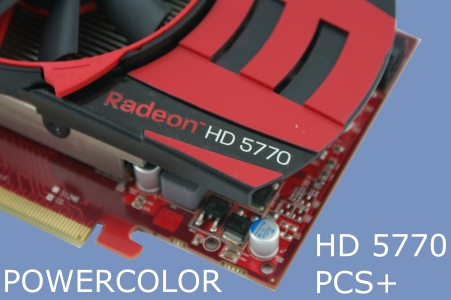 Under the "Gamer" preset, the quality of game play is certainly acceptable at 1920x1200. As always, lows of ~20fps will mean that movement may seem a little "choppy" however you are likely to notice if you are sufficiently immersed into the game.

We were very impressed with DiRT2 performance. Not only was the game play fluid, the grouping of framerates remained just 15fps apart with lows of just 40fps. Further gains were achieved with the GPU Core overclock but under these conditions they would go unnoticed.

Metro 2033 is a comparatively recent Action Game release. Known for it's high performance demands, we took the HD 5770 through its paces to see how it might perform...

Quite clearly if your intention is to play this game at 1920x1200, you will almost certainly need a graphics card with more grunt than this.

Call of Pripyat, the sequel to the original S.T.A.L.K.E.R game is also a recent release, which takes full advantage of the DirectX 11 API. The engine itself is relatively efficient but remains to be an effective way of ascertaining the abilities of current generation hardware.

Unlike in Metro 2033, the Radeon HD 5770 can offer fluid gameplay in Call of Pripyat at 1920x1200. Unless high levels of AA/AF are applied, we do not expect this graphics card to disappoint in this game.

silenthill
Nice looking card (cheerful) but it would be nice if you could give us a power chart so people can compare power consumption with the 460 being that the HD 5770 main advantage over the 460 is its lower power consumption.

alienware
Roffle, they're totally ripped off the Ares cooler. It's nice though

Thanks again for another tip top review chaps