Up close and Devilishly personal

Up close and Devilishly personal

When looking at this GPU we were amazed at the sheer scale of this GPU, offering a dominant design that comes at least three PCIe slots thick and with a large triple-fan cooler design.

Unlike many of today's GPUs, the Red Devil lacks RGB illumination of any kind which, let's be honest, would be pointless on a GPU with such a well-defined colour scheme. RGB would only serve to add needless expense to this GPU, as anyone who would want any LED colour aside from either red or white here clearly needs an eye test. 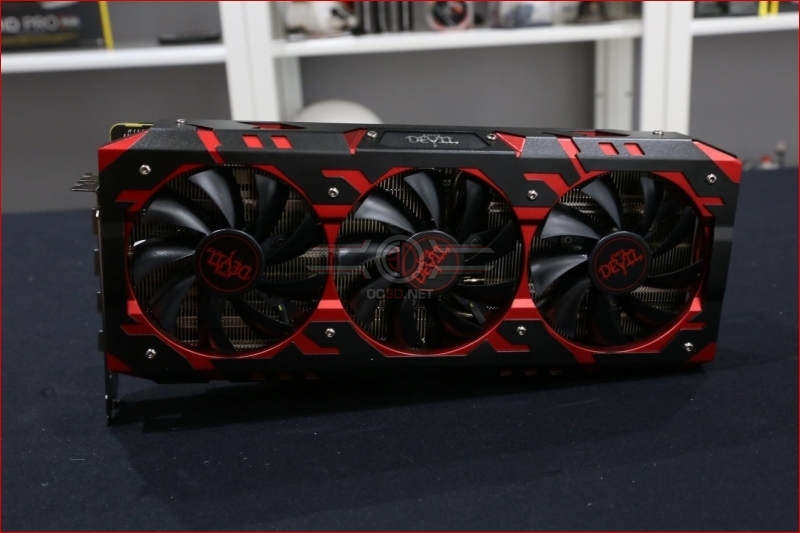 Looking around this GPU we can see that this card offers a display configuration that is different than AMD's standard RX Vega GPUs, offering two DisplayPort 1.4 connections and two HDMI 2.0 connections. This is not that big of an issue as both HDMI and DisplayPort support AMD FreeSync, though the extra HDMI will come in handy if users ever hook their systems to an HD/4K TV and a VR headset. 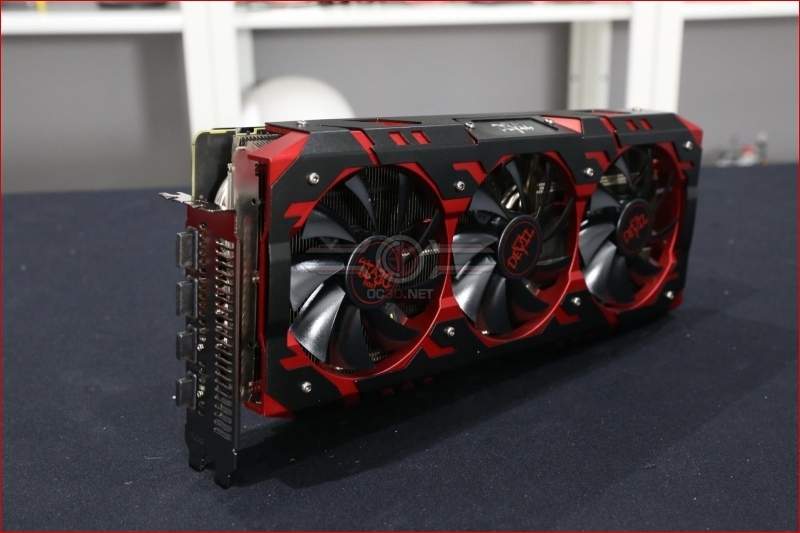 Moving to the rear of this GPU we can clearly see that this GPU's cooler overhangs its PCB a little, with the GPU's full-cover backplate coming with some ventilation gaps and a recessed section for the card's two 6+2-pin PCIe power connectors.

The card's backplate offers a brushed metal aesthetic with a glossy Red Devil logo, offering a pleasing contrast when looking at this GPU, particularly from the outside of a case. 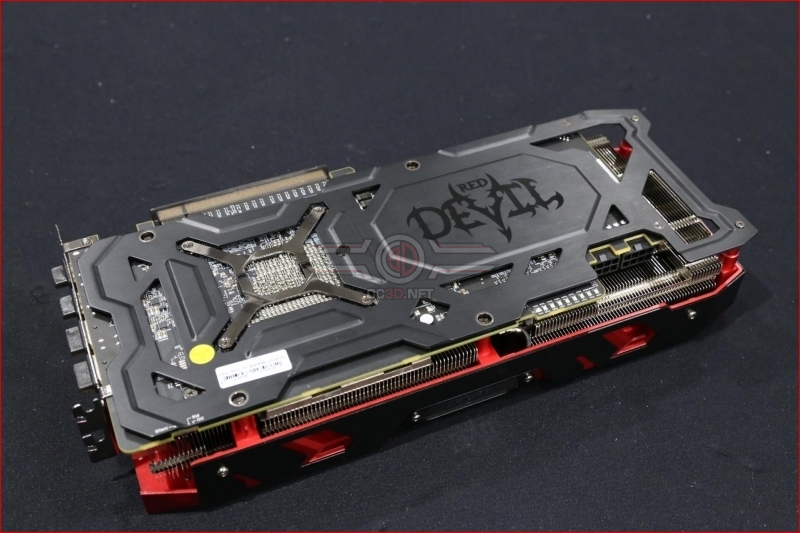 The Red Devil logo on the side of this GPU offers a mirrored finish and can be illuminated with a red LED if the user chooses. Just above the GPU's Red Devil Logo there is a simple switch that will allow users to turn this LED ON and OFF, giving the users a choice between a red logo and a mirror effect logo. 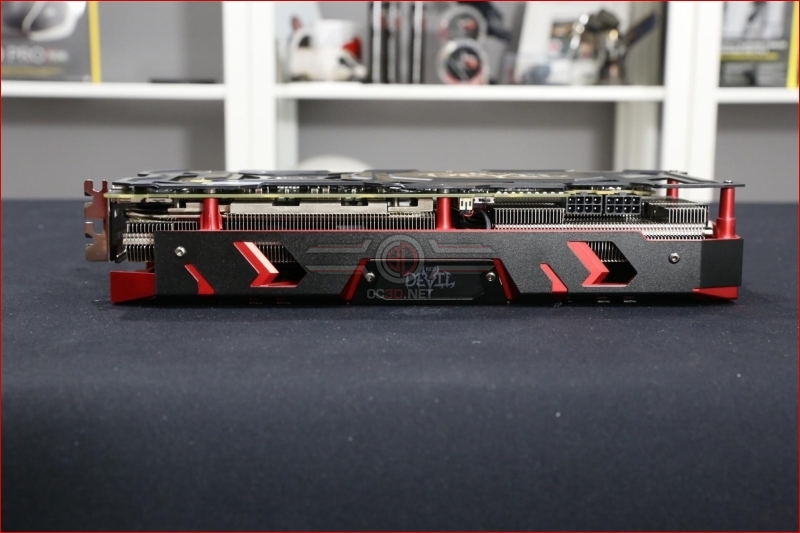 At the top of this GPU there is a three-way BIOS switch, which allows users to pick between this GPU's silent, standard and overclocking BIOS', all of which offer the same base/boost clocks but offer different temperature targets and power limits.

We plan on testing all of these BIOS modes to showcase the performance and power draw changes that they provide. 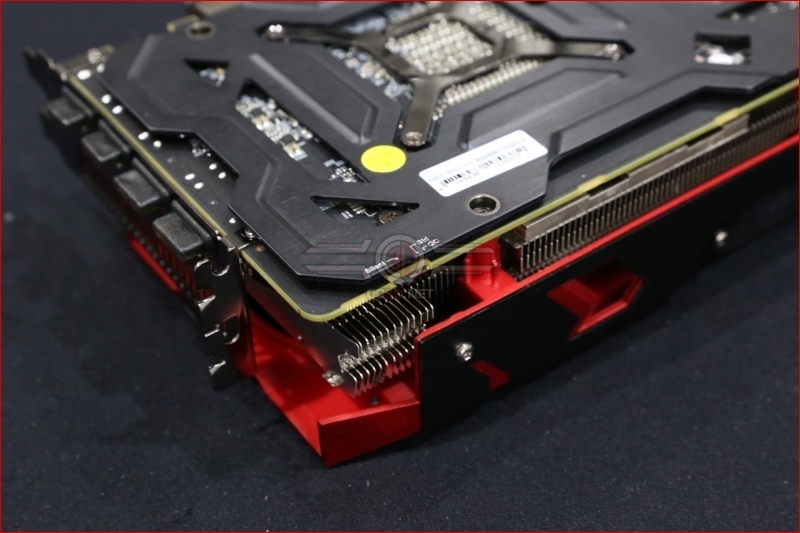 Moving to the rear of this GPU we can see a GPU Tachometer, which can be used to judge the power draw of the GPU. Right now we think that these LED light up red when the GPU is in operation, though we do not know how they are affected by the card's LED switch.

Like reference RX Vega and R9 Fury series cards, these LEDs can be used to judge whether or not the GPU is drawing full power, which can be useful if you need to quickly spot if a game or app is CPU performance limited. 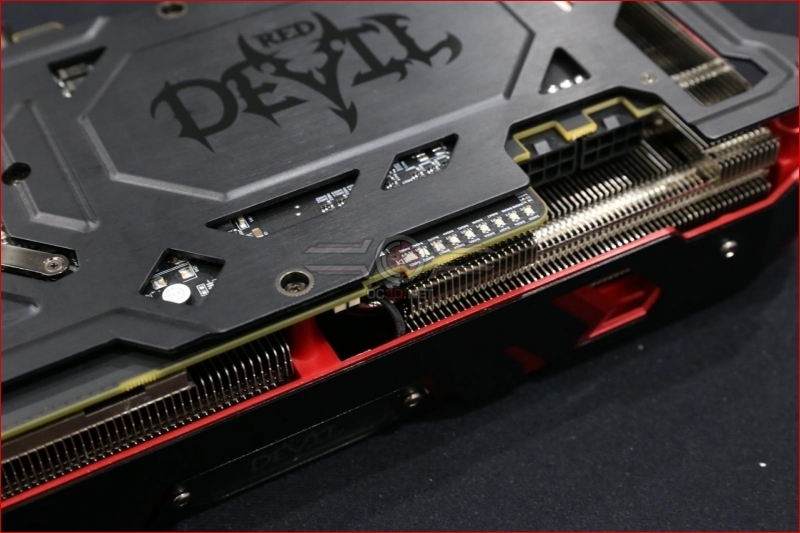 BigDaddyKong
I always worry about them. You always see a lot of PowerColor refurb's models on sale at Newegg.Quote

Thelosouvlakia
Yay powercolor got the "Devil" branding letters the correct way this time!!Quote

MacLeod
I've used Powercolor before and they always worked pretty good. I've still got an old Powercolor 4850 from way back in the day. That is still the best overclocking GPU I've ever owned.

When I bought my MSI 290x Lightning I almost went for the Devil version of the 290x. I always thought they were pretty cool looking cards. Really curious to see what Powercolor was able to do with the Vega 64 cards.Quote

AlienALX
Thomas. Is that anodised metal on the card? or just plastic pretend stuff? Stupid question, but anodising is super expensive.Quote
Reply