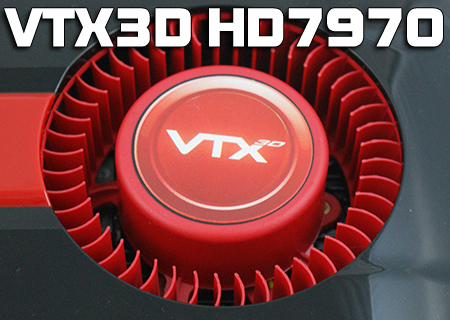 I don't think it would be either a great stretch, nor revealing a particular dark secret, to say that we never really took to the HD6970 here at OC3D. After the absolute magnificence that was the HD4870 and HD5870 AMD really dropped the ball with the HD6970 which was too hot, too loud and just not quick enough to even stay close to the high-end nVidia cards.

So it's with a certain sense of trepidation that we take a look at the HD7970. At least after the HD6970 our expectations are dampened somewhat, so we're hopeful that this will impress us.

VTX3D, the VTX standing for Vertex fact fans, have been around for a couple of years and stick solely to the Radeon line of products. But enough of the preamble, what's new?

To say the technical specifications of the HD7970 are lengthy is somewhat of an understatement. 3GB of GDDR5 is only the beginning. The major new feature is the new 28nm Tahiti XT core which comes with a stunning 2048 stream processors and enough bandwidth and polygon shifting abilities to excite even the most jaded user. The GCN (Graphics Card Next) architecture is a complete redesign of the old AMD GPUs, and should lead to a similar increase in performance that we've seen from things such as Sandy Bridge, where the pure numbers don't tell the full story of the available number crunching capabilities.

Solidarity
It's good to see it doesn't matter too much.Quote

Very hit and miss as to the newer kit helping in any way. Some yes, some no. But I'd still be banking that the x79 pcie3.0 lane usage isn't being capitalised on by the mobo for anything other than storage, at this point - so Intel boast. Which isn't fair atm as the 7970 is pcie3.0 boasting on AMD's website.

Artificial benchmarking-wize, for the higher numbers you want for your submission, you'd stick with the "older" i7... which is bizarre. Verging on madness imo. Although I do recognize that there are bios upd8s for mobos, particularly Gigabyte I seen the other day, that are allowing higher oc etc. To that extent it's still a work in progress I guess.

Still bizarre to me. Newer cpu, newer mobo, quad memory - I'd expect more. Seems the realization is that the z77 (or whatever they'll be released as) will be the pci3.0 'real utilizers'. We will have to see.

On another note, I'd be interested in knowing if Mafia 2 and Metro 2033 were benched with PhysX used on the cards. I know it's classed as "unfair" to do so, by those who can't use it gpu-wize, but if you're looking at a set of results of which to base your purchase of a game to play either of them, and your £440+, you'd want to be sure you can enable everything and expect the same results. Especially when comparing with the older 580 @ £360+ Today.

Judging from the euphoric nature of the responses to 7970 reviews, I thought it cleared the 580 by more than it did in many graphs here. It certainly does an outstanding job of raising the minimum fps across the board, even in those it didn't get a better average fps in. A good die shrink, which I'm pretty sure is the best you can hope for from nVidia for a fair time to come.

Memory usage is something people don't closely look at. I can remember benching one rig with.. GTA X (not sure if 2/3 or whatever) and the graphics levels were not permitted to be raised any further, quality wize, cos the preferences showed that the graphics memory wouldn't take it. And this wasn't a cheap card, so memory can be important. It would be nice to see more games show such a memory usage bar in their preferences.

It's good to have a choice from both card manufacturers to chose from now, although I didn't think the 6970 was "that-bad" as people reported.Quote