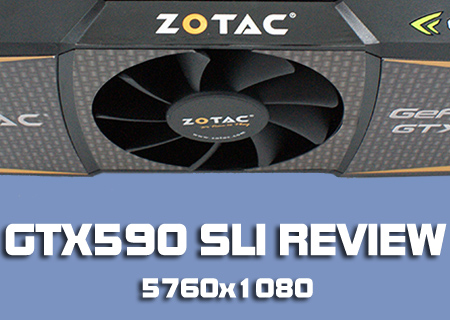 So if you plan on multiple-screen gaming, are you better off with the twin-GPU HD6990 or the nVidia equivalent Zotac GTX590?

In some degrees it depends upon which game you want to play as some perform better than others in certain circumstances. However looking at the results in an overall manner we'd definitely suggest plumping for the Zotac GTX590.

In the single card scenarios, either with a single screen or the triple-headed monster, the Zotac comes out on top more often than not, and by quite a margin too.

The new 275 drivers from nVidia deserve special mention as the difference between the results we obtained using the 275.33s and those we saw when we first tested the GTX590 on the 267 ForceWare drivers is just incredible. For example our initial Metro 2033 tests saw 66 FPS, today on the 275s we got 117. Now that's the extreme end of the scale but even so we saw improvements everywhere. It seems nVidia have finally unlocked the insane amounts of power available from the GF110 GPUs.

Speaking of power we all know that power equals heat and removal of heat equals noise. Our largest complaint by far about the HD6990s is how hilariously hot and noisy they are. To put it in perspective our SLI Zotac GTX590 setup was quieter under load than the HD6990 was. Comprehensively quieter. That's two cards being quieter than one. Now considering that decibel is an exponential scale rather than a linear one it really emphasises how much easier the GTX590 is to live with on a daily basis. The HD6990 makes us want to put the tower in another room, the GTX590 we'd happily have it right next to us.

Of course pricing has to be taken into account. On average the Zotac is about £50 more than its AMD equivalent. However not only does that £50 buy you almost unquantifiable levels of performance but much more 'liveability' too. It's quieter, and the use of Mini-HDMI rather than DisplayPort means a reduction in cables and adaptors needed to get the cards running out the box. It's just all around a nicer product to use daily.

This earth-trembling power and usability means that as a single card the Zotac GTX590 is worthy of our OC3D Gold Award. Even at the thick end of 500 notes it's an absolute sledgehammer. The SLI setup naturally is way too expensive to overlook the price, but the potency of the cards in tandem cannot be overlooked and so it gets our OC3D Performance Award. If you've got the spare cash, it's the easy choice to go to.

Thanks to Zotac for supplying the GTX590s for review. Discuss in our forums.

dugdiamond
looks great, but as usual (lol) i have my concerns...

a single card is needed for triple eyefinity setups...... AND ONLY ONE WAS USED

half the price (of the nvidia counterpart) for tri-monitor (~£560)

tinytomlogan
Quote:
Single 590 test was with tripple screens.... So errrrm ONLY ONE WAS USED

dugdiamond
Quote:
i was just wondering why the benches from the PowerColor HD6990 Crossfire Review weren't included in the stats, and would be curious to see how they (or similar) would measure up in eyefinity mode

DiggyDiggyHole
Good god .____. if the 590 is now ahead...does that mean ween the MARS II comes out.....I would hate to work for ATI after that XDQuote
Reply