The ASUS TUF range has been around for a while now and the fact that it has proved extremely popular to those of you who demand longevity and there hasn't been any furore around them unexpectedly dying shows what a successful idea it has been.

Naturally we hope that all of our hardware will last a lifetime - the lifetime of hardware in this case being 'until we get bored and want something new' - but the reality is that some products are manufactured to a costing limit, or to squeeze on all the latest and greatest gizmos, rather than just committing to produce an item which will last.

The latest addition to the ASUS TUF range of products is the TUF Gaming K7 keyboard. Sporting opti-mechanical switches that promise to be even faster than their wholly mechanical cousins, alongside IP56 water resistance letting you knock over your energy drink of choice and keep on gaming. You might think that's an unlikely think to include, but we don't know a single person who hasn't, at some point, clattered the drink on their desk and ruined a keyboard. With the growth of streaming meaning it is no longer a private 'oops' but instead something you're likely to perform in front of an audience then having the ability to carry on without fearing that your keyboard will die is a definite boon.

It's not just the water repelling nature of the K7 that allows it to have the TUF branding. As well as the IP56 dust and water resistance the switches are rated to a staggering 100 million actuations, the top plate is aircraft grade aluminium for robustness, and even the internal components have been coated to reduce the chance of oxidisation. If you want a keyboard for the post-apocalypse, this might very well be the only choice to make. 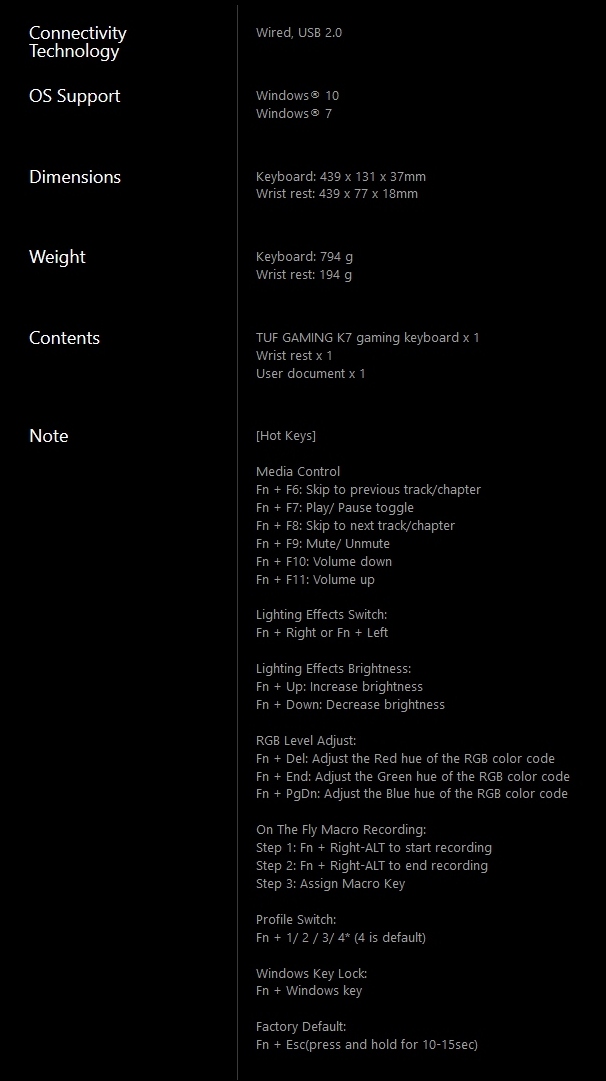