The evolution of mice in peripheral terms is very close to the evolution of actual mice, namely incredibly fast. No sooner had Razer released their Boomslang that was the ultimate expression of the ball mouse, than optical mice appeared and suddenly the idea of a ball on rollers that you had to keep scraping the fluff off seemed quaint.

Barely had we got used to the idea of optical mice than things like the Microsoft Intellimouse appeared with both battery powered wireless connectivity and side buttons. Those two ideas became firmly entrenched in the DNA of mice. For a while the main changes were in the sensitivity of our, ahem, sensors and the reduction in the latency of wireless transmission. It didn't take that long for wireless mice to be as responsive as their wired cousins, and then with the advent of slimmer batteries for our mobile devices those light, tightly packaged batteries then became the norm for wireless mice. Soon mice adopted the lighting idea we'd begun to see in our cases and then hardware, and that pretty much brought us up to current thinking. Gaming mice have insanely capable sensors, 1ms wireless latency, RGB out of the wazoo and usually plenty of button choices.

The ASUS TUF Gaming M4 Wireless Mouse cocks its snoot at such developments, and instead is a wireless mouse, but with just side buttons, battery powered, and no lighting to speak of. Is that still enough in these modern days? Let's find out. 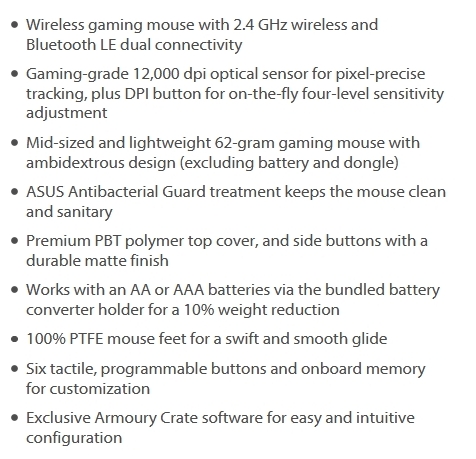