The Corsair range of keyboards has been a monster success. When they first appeared as the Vengeance range we were impressed by the build quality and clever features, and as time has gone on and Corsair have refined their design, including dropping the Vengeance name, they have continued to blow our minds.

From the extremely affordable basic models all the way up to the K95 Platinum there is a holistic design that runs through the DNA of all of the Corsair models. Whichever one you're looking at you will never confuse it for another manufacturers. Such was the success of the initial design that subsequent models are very much incrementally improved from the base design template. For instance, until recently the Corsair logo was chromed, whereas now it supports the RGB lighting in the same way as the rest of the keyboard. Equally the media control keys and such were once all white, but now blend into your choice of lighting. Only the lock indicator switches remain resolutely white. Perhaps a future model will finally banish non-user-defined shades from our input devices.

Anyway, if you've been jonesing for a K70 keyboard but wishing that it was a little bit shorter, a little bit quieter and the switch response was even faster than it's ever been before then Corsair have heard your dreams and brought out the Corsair K70 RGB Mk.2 Low Profile Rapidfire keyboard. Equipped with extremely short throw Cherry switches and all the Corsair design touches we've grown accustomed to, let's see how it performs. 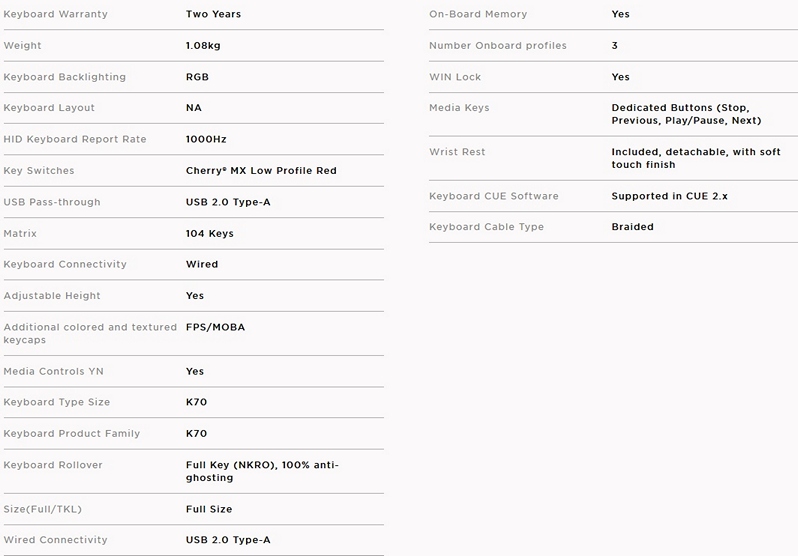 
How does it work without the software loaded?

Does it retain current settings, or does it go dark - or something in between?


Not a big fan of too much software loading and running all the time.Quote


I suppose that information is not known. Fair enough, you cannot test everything.

Perhaps I'm the only one that does not like to have huge software packages running for each peripheral. The mouse has one, the keyboard, the headset .... And besides taking up memory and CPU cycles they clutter the desktop and more often than not, they are also a marketing channel trying to show you ads for stuff.Quote
Reply