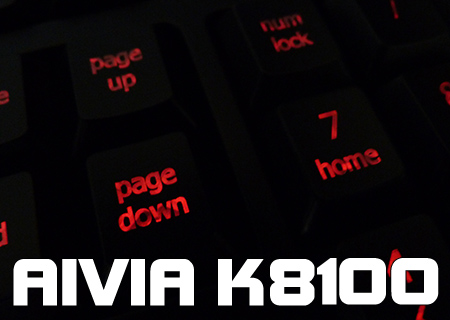 The K8100 comes with Gigabytes 'Ghost' Software which allows you to program the various functions of the five macro keys on the top left hand side. It certainly looks very nice with a decent skin and thankfully comes with a fair few options built in.

Assigning an action is as simple as dragging it from either the left hand pane, in the case of presets, or the right hand one, for user-created macros, and dropping it in the slot you desire. The Ghost software doesn't run in the background, and there is no on-screen display to indicate the function of the button you've pressed, so hopefully you've either a pen and paper handy or a good memory. 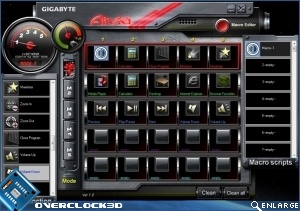 The macro editing section is powerful, but by no means the most user-friendly we've ever come across. There aren't any tooltips, and the solely icon-based nature of the GUI leads to lots of swapping back and forth between the program and the PDF manual until you get to grips with it.

It's very powerful once you do get to grips with it and it's possible to record very complex actions, including moving the mouse pointer to specific areas of the screen. With enough time and effort it would be possible in, for this example C&C3, to select, place and build most of your initial base with just a single macro, including delays to allow your money to build up.

Of course that's just a single example, but if you're willing to cope with an almost willfully difficult interface then there is a lot of power beneath your fingertips. 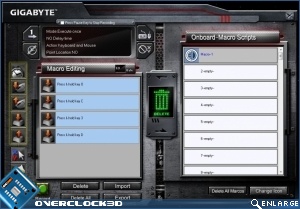 I would have liked to see an option to change the colour of the lights. It does look very nice and the keyboard cover is a nice addition because I'm OCD when it comes to peripheral cleanliness

. For £40 you do get some good features but there is nothing that really separates it from other keyboards in a similar price range. So, a bronze award is fair

CocaCola
Looks like an interesting keyboard, but seems like it's only good for basic gaming and everyday typing. All I can say is, that it looks like a Lamborghini Reventon. I think Gigabyte had purposely used the stealth and sleek look of the vehicle on their keyboard.

Zeals
Quote:
Have you seen the yellow one?

silenthill
[/size][size="3"]I was wondering if the software slows down the system because My Logitech G19 software definitely slows down my system even with the latest updates from Logitech.