As there are no quantitive measures of a keyboards performance, you will have to rely on my judgement.

I have several keyboard that I have compared the Keysonic to: 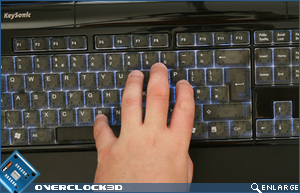 I used the following environments for testing:

Using Counter Strike: Source and BioShock I tested how the keyboards felt during gaming.

I have used the keyboards for writing up several reviews and other longer periods of typing. This will show how easy and comfortable the keyboard is to type with.

I watched a DVD and listened to some music to see if the extended functions of the keyboard actually worked.

The Saitek Eclipse and Eclipse II were the superior keyboards whilst gaming. The slightly more laptop style keys on the Keysonic weren't quite as responsive as the more gaming-orientated Saitek's although gaming was still perfectly possible and certainly far superior to a laptop keyboard.

Note that the Keysonic is not aimed at the gaming market at all, though I think once you have got used to it it could be one to take a look at.

Both of the Saitek Eclipse's and the Keysonic were perfectly comfortable and easy to use during extended typing. The Keysonic's key-presses were accurate and gave good feedback.

The Keysonic has a couple of semi-media keys in this department but blatently not as many as the Eclipse II. Whilst the volume keys are a cool extra, the addition is more gimmicky than any actual use.

The Keysonic performed well during testing and was generally a positive experience to live with. Whilst gaming wasn't as strong as the heavily gamer-oriented Saitek's, general typing was a decent experience and the Keysonic grew on me, despite my dislike of laptop style keyboards. I have been using the keyboard now for several weeks as my main keyboard and whilst I didn't really like it to start off with, I have grown quite fond of it.

For a little more of an objective view I gave the keyboard to my better half to try out for a while. She browses on the Internet and does a lot of "Facebook-ing" so I thought this would give me a better idea of what others thought of the semi-laptop keys. The feedback was generally good, after I got past the "but why does it need to light up?" (*sigh* - Ed) and she liked the keys as they were like the ones on her laptop but a little more "clicky" and easier to type with.

Brooksie
Nice review Matt, found a coding error though, the image thumbail for the front of the box when clicked it opens the back of the box pic.Quote

ionicle
looks really nice, shame it has a few little things wrong with it though

Now both the pic's are the thumbail for the front of the box.Quote