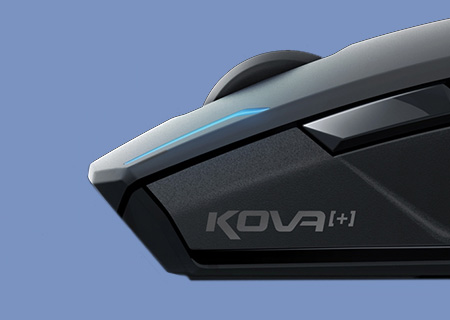 So how does the upgraded Kova Plus fair?

It's a whole boat-load better than the already good Kova, with just a couple of niggles.

Let's get the bad out of the way first. Despite software light control there are actually only five useful colours and two of those are blue. This isn't going to be the choice for you if you care about matching the colour of your mouse to a non-standard (red, green or blue) modified PC. Also, and it's a minor problem but, the default assignments for the mouse have the front left side-button as "browser forward" and the front right one as a timer. If your mouse only has three buttons the third should always be back, which is far more useful than forwards.

However those are both minimal problems. The switch from on-board to driver based customisation has opened up a wealth of possibilities and control options. If there is one thing we abhor it's things taking control away from us, or not giving us full access. Here the Roccat Kova Plus software is up to their usual incredible standards, being easy on the eye, easy to use and having a small memory footprint. The plethora of included macros should be more than enough for anyone to get using the Kova Plus immediately and are a fantastic jumping off point into creating your own macros.

For about £40, around the price of most worthwhile gaming mice, you get a hell of a lot of rodent for your money. It feels fabulous with that rubber top being a big improvement on its Dads textured surface. It's usable by left or right-handed people which is something many manufacturers overlook on their high-end gaming mice. AND it comes with a wealth of possibilities waiting to be explored.

Most of the other good choices for this money are designed for right-handed gamers and so on that basis alone the Roccat Kova Plus gets a serious recommendation. The fact it's also a great mouse in its own right is icing on an already tasty cake. This is a very congested segment of the market with a multitude of choices available but the Roccat Kova Plus still manages to stand out and is a winner of our OC3D Silver Award.

Thanks to Roccat for providing the Kova [+] for review. Discuss in our forums.

Zeals
Not sure if it's just my computer freaking out, but this thread is tied to both the mousepad and mouse.Quote

I love my Sota though