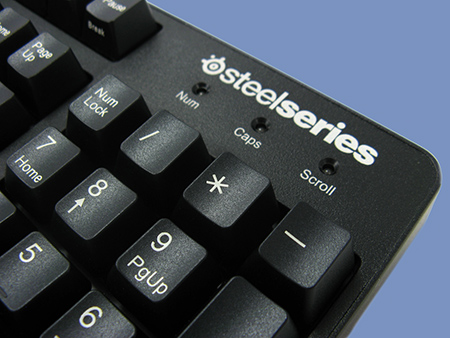 Each type of review presents a unique challenge. Some, like the PSU reviews, require incredible amounts of complex data to really demonstrate the usefulness of a product. Others, like GPU or CPU reviews, are some opinion but mainly backed up by data from a battery of standard tests we can all recognise.

Keyboards most definitely don't fit in this category. There is no plethora of tests we can run that produce hard data. We have to rely on you, the reader, putting faith in us to give you the best explanation we can of what it's like in daily use. Because it therefore all comes down to opinion, which to some degree is subjective, to save repetition our thoughts will be both our testing, and our conclusion.

One of the hardest things to get across is the sheer quality of the SteelSeries 7G. If you are the type of person who skips straight to the conclusion then stop right now and go back, because looks do not begin to tell the story.

For something that is marketed as a gaming keyboard, and certainly at this price point, it's quite a surprise to see a complete lack of visible bells and whistles. Most high-end keyboards justify their price with showy lights or screens. Often they have an inordinate amount of macro keys that even the most complex game will never need, and more often than not the user never fully gets value from anyway. Of course in use it quickly is apparent that a keyboard over £100 that has a full colour screen on it will have a lot of its cost sucked up by that screen and the actual keyboard will be fair to middling.

SteelSeries have taken the bold, and highly laudable, step of realising that rather give an average keyboard and expensive stuff you wont use, they will spend every penny of the price on the important stuff. The actual keys themselves and the way they provide the signal. Words cannot to justice at all to the quality. It's staggering.

Starting with the looks, there is certainly nothing offensive. For every person who likes the fact your keyboard is shaped like a banana, there will be loads who don't. The 7G goes for a very classy black with white key affair, and even then the lettering on the keys is brilliantly crisp. The Num/Caps and Scroll LEDs that so often are amber or blue are also white, further highlighting the thought that has gone into this.

The keyboard has proper heft to it too. Not the weight you have when you find something has been built down to a budget using cheap and thus heavy materials, but up to a standard. It's solid, rather than heavy. There are no flimsy feet either, the angle is defined by the wedges either side of the lap cut-outs, and is near perfect. It's especially good with the wrist rest which, again, is perfectly formed to fit exactly round the main keyboard in an elegant and simple solution to the RSI threat.

SteelSeries 7G Findings - In Use

The keys themselves are exceptionally nice. As someone who has converted from the old IBM style mechanical keyboard over to more of a flat laptop-style one, merely looking at it got me worried I'd be back to the days of pressing hard per key. Initially that is how I typed on it because if you've got all that travel you have to use it. Not at all. As I said earlier the SteelSeries 7G costs so much because the money has been spent on the innards, rather than flashy stuff, and my word does it show.

Sure the keys look high, but don't be fooled. The actual amount of force needed to activate them is less than on my laptop-style keyboard. You barely need to brush them and your desired key appears. That's not to say it's over sensitive at all, but if you looked at the photos and thought "an old style keyboard with no flair for that money!" you couldn't be more wrong.

The keys are tactile in a way a low-profile keyboard could never hope to be with both great feedback on the key depress and a sprightly return to assist you to moving along to the next one.

This is truly where the bulk of your money goes. Every key has 18k Gold-Plated connectors on the no-click switches under the key. Gold-Plated connections always sound good, but usually mean the barest minimum plating that can be applied and still legally be Gold-Plating. Not so here. Considering the incredible depth and quality of the plating on the USB/Audio and PS2 connections, which wont get near the abuse the 50 million keystrokes the 7G is guaranteed to perform, then one can only be left in awe and wonder at the amount inside the case. There must be so much that when the keyboard finally fails in about 100 years time your grandchildren can melt it down and have enough gold for a ring.

So if we can't see them, do we know they work? Definitely. Take a moment to look at the following two screenshots. SteelSeries say EVERY key can be pressed at once. In the following picture, grabbed from PassMark Keyboard Test, my left hand is across the keyboard covering as much as possible (the keys in red are being held down right now) whilst the right-control is held down ready to hit print-screen and take a screen grab of this incredible demonstration.

This is a stunning achievement. Ok most FPS games wont require a large amount of keys at once. But if you're moving diagonally forward, whilst holding crouch and reloading and talking to your team-mates, the ability to do all this at once is very handy and so suddenly the gaming side makes sense.

The second thing the Gold-Plated connectors coupled to the soft-press keys means, is pure speed and zero lag. Within the PassMark KeyboardTest it shows you all sorts of information to help show how low the latency is. So my fingers went at it like epileptic maggots in an attempt to see exactly how fast it could go. The two important numbers are Characters per second (an astounding 50) and Lag Time (and even more shocking 2ms).

So it was accepting 50 keystrokes per second with a 2ms lag. With high-end gaming mice around the 1ms mark and considered an absolute must, how come more people don't find out how slow they keyboard really is and realise that most of those frags weren't because your mouse was slow, but your keyboard was too slow to let you get out the way. Again, whilst you wouldn't initially consider this for gaming, you'd be a fool not to.

So there is no escaping that price. Initially I thought, probably much like you did, that £105 for a keyboard that was, as far as the eye could see, just a keyboard was steep. Any feelings of that nature disappeared the moment I started typing on it. It's an absolute joy. You get all the tactile feedback you could ever desire and it's sensitive enough that, with practise, you'll be typing faster than you thought possible as your fingers dance across the keys.

Incredibly packaging, brilliant feedback, the highest quality braid we'd seen in recent times if not ever, and internals that will last five times longer than the average keyboard. If you started now and you pressed the same key once a second, every second of every hour of every day, it wouldn't begin to shown signs of fatigue for 20 months. So under normal circumstances it's pretty much a "this is the only keyboard you'll ever need" purchase. Uncompromising in its quest for engineering perfection.

There is an old maxim that you get what you pay for. With the SteelSeries 7G it's nearly a bargain.

It's the absolute Rolls Royce of keyboards and I have no hesitation in awarding it our performance award.

Many thanks to SteelSeries for providing us with today's review sample. Discuss it in our forums.

cl0ck_ed
Looks solid, but could I justify the cost?? No!Quote

Diablo
Whilst you aren't specific on the LCD embedded keyboard, I wonder if you have used a G19? Whilst the steelseries is undoubtedly exceptional, I find the G19 to be signinficantly above average for general use and the macro keys would be missed even around the desktop and in typing documents.

mayhem
Lol .. wow thats alot of money to invest in a keybord esp since its realy not that special ... Hmm i think that is serisly over priced for a pritty standard keybord with gold plating.....

I still think the original cherry keybords are better and lets be honist here. if you think thats going to make you a batter player in games you are so wrong lol the only way to get better in games is to play them properly.

allso the sound jacks to the keybord sound good but come on when your playing games do u realy want any wires near you kd at all. Not a chance ...

if they had a lcd and some nice real macro keys then it might be worth it but other wise thats just a show off peace of equipment that is for people with more money than sense.Quote

TWeaKoR
While I'm sure that it's top in terms of design and quality, I just can't see it being worth that much. Fair enough, they've cut no corners on making it perform, but I get the feeling that a lot of the cost goes into the 'we're the best' factor rather than how much it costs to design and produce. I just don't see the point of getting one of these unless you've got more money than sense and really need that tiny bit extra when there are plenty of other products out there that perform to similar level and cost half the price.Quote
Reply