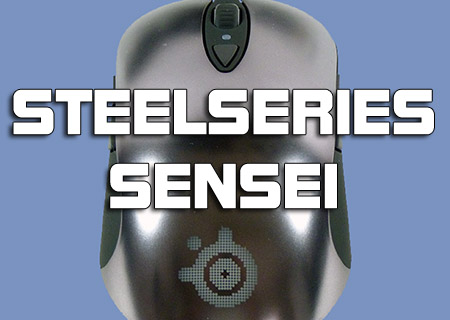 Now the Sensei doesn't actually require drivers, thanks to that onboard processor and some handy trickery, but to get the best out of it you'll want to grab the SteelSeries Engine software which opens up a world of possibility. It comes with 8 profiles by default, but other ones are easily created. Especially noteworthy is that all the buttons, except the CPI adjustment one, are configurable. So you can easily swap left and right buttons if the mood takes you. Or have the left one perform some complex macro.

Profile management is probably the most elegant solution we've found. Once you've created your meisterwerk you just drag it from the left pane to the mouse and Robert is your mothers brother. If you take your rodent elsewhere on another system, just drag the profile off the Sensei into the left pane and it's all ready for tweaking. Seamless. 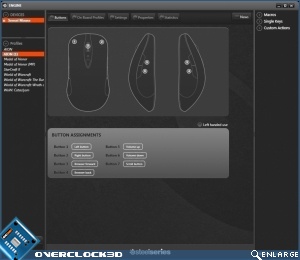 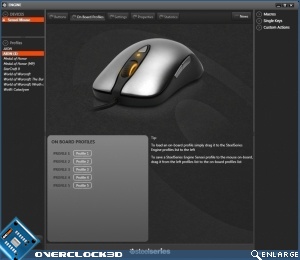 There is loads to cover in the settings page, so get comfy. The ExactSens is setting the two CPI profiles that are handled by the CPI switch just behind the scroll wheel. All of the sensitivity is handled "on mouse" so you have zero software lag and therefore your results are exact. Once you hit 5700 CPI, a speedy pointer in anyone's book, you move into the stratospheric levels enabled by the onboard ARM processor, until you hit the giddy heights of 11400 CPI. At those levels you could probably breathe the mouse pointer around.

Below that we have the various lighting options. All fairly obvious, although it's nice that you can choose from any colour you like, rather than a set few. The CPI1 and CPI2 LED colours indicate which of the two CPI modes set above you're currently in. Probably wise to make them disparate. Further down are the adjustments for the LCD screen on the underside. Any bitmap is representable, although obviously if the initial image is 1bit then the LCD will more accurately reproduce it.

On the right hand side are the other tricks in the Sensei's armoury. FreeMove is a version of something which we all detest, mouse smoothing. However, and it's a big however, thanks to the powerful processor it actually works very well. Sure it's taking a level of control away from you, but you can always turn it off. When it's on it makes drawing a straight line much easier, which is not only helpful in art, but in keeping your LMG at head height as you lay down suppressing fire. ExactAccel is a scalable speed up, so if you're desperate to get from one side of a triple-screen monitor to the other in a hurry, this will do the job. ExactAim is more useful because as you slow down, it lowers the sensitivity of the Sensei so you really can shoot the wings off a fly. Or the eyes out of your enemy. Finally ExactLift controls the lift distance so you can fine tune the Sensei to your surface of choice, and the polling rate is something everyone will leave at 1000Hz. But it's nice to have the option. 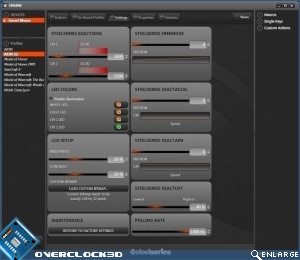 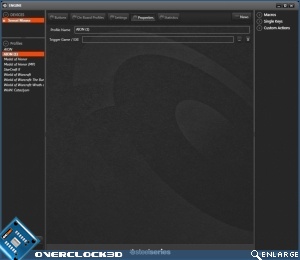 One fairly strange feature is a statistics option where you can start and then go off to play and the Engine will keep track of how often you've pressed each button. Not immediately useful but if you set two different buttons up for the same job and then see which you hit more often in the heat of battle it could make maximising your profile that bit easier.

Yet another in this plethora of useful features is the ability to change profiles without having the Engine software running. Because everything is handled by the ARM processor onboard you just hold down the CPI change button for a couple of seconds and then either use the scroll wheel or side buttons to switch profiles. If you've forgotten to assign different colour schemes to each, or forgotten what they are, then the LCD display handily lists them so you know which one you're using. 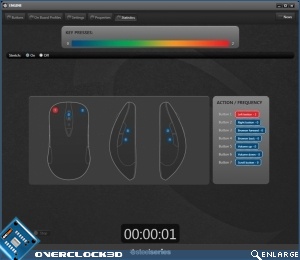 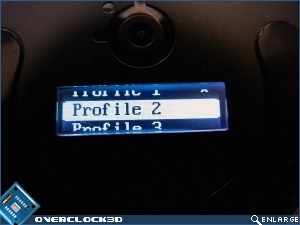 Phew. Time to have a look at some pretty colours and wrap up our thoughts from testing.