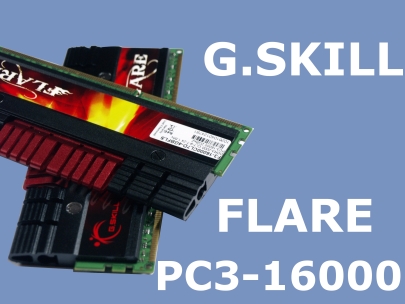 All in all, the G.Skill Flare memory kit performed well on our Socket AM3 testbed. Our tests showed positive results at both tighter timings and higher frequency. Neither configuration was noticeably superior.

As we had previously highlighted, it was a shame that our AMD Phenom II X6 1090T was unable to push the RAM to its rated 2000MHz frequency. It should be stressed that at no point did it appear as though the memory was the limiting factor in our overclocking endeavours. As much of a shame that it is however, our findings should be food for thought for those who intend on purchasing high frequency memory for their Socket AM3 systems.

It would be unfair of us to assert that no Phenom II X6 processor is capable of pushing RAM to high frequencies. Infact, with advances in the Thuban core's production, it should be quite possible to take memory upwards of 1850MHz if you so wished with a good processor. Needless to say however, this is risky business on Socket AM3 and that there is every chance that memory such as this is wasted on the platform.

Now lets discuss price. Unfortunately this particular set isn't widely available but we were able to find it on sale with a small supplier via Amazon at £159. If this is indeed the expected retail price for this 4GB kit in the UK, then it is very difficult to justify it. When these days it is possible to purchase C8 DDR3-1600 for well under £80, one really has to think twice when purchasing this kit. Just to put things into perspective, an £80 saving in memory is enough to build a machine around the Intel Core i7, rather than the Phenom II X6.

To summarise, the G.Skill Flare PC3-16000 memory series is a great performer. For those who really care about squeezing every point out of their benchmarks, then this is what you're after. Despite the RAM's recommended Socket AM3 usage, we believe it will prove its capabilities to a greater degree on a Core i5/i7 configuration instead. As for Phenom II users, do you really need this memory? We think not.

The Mediocre
- Price
- Intended usage on Socket AM3 is arguable futile.

Thanks to Gskill for the Flare on test today, you can discuss our results in the forums.

AndrewJohnRegan
The problem with the RAM not going to up to 2000Mhz might be that your motherboard is not specified as being compatible with the RAM. Only selected boards have been comfirmed of being able to run these fellas at 'full':

*The Asus Crosshair Formula is also compatible, though it does not say so on the compatible motherboards list.

Sorry btw if im just stating the obvious to you though matey. I'm probably just being a .Quote

SnW
You might want to read it again Andrew

AndrewJohnRegan
What have I said wrong then haa, knew i'd mess up somewhere.