ASUS has officially unveiled their first series of Republic of Gamers all-in-one liquid coolers, offering gamers both entry-level and ultra-high-end models, both of which offer integrated OLED displays for unparalleled customizability.

These OLED displays can be used to display custom animations, custom text and custom logos. This display will allow users to customise their system to their liking, beyond what is possible with RGB lighting solutions. All of ASUS' ROG series AIOs will ship with RGB illumination, which is controllable using ASUS' Aura LED software suite.

ASUS' Republic of Gamers series AIOs is split into two categories, their high-end Ryujin series and their entry-level Ryuo series. Both of these products will ship with 1.77-inch OLED displays, though at this time we don't have any pricing information for either model.

The high-end ROG Ryujin will ship with 240mm and 360mm models, using Noctua PPC radiator fans to offer high-end cooling performance with a simple black aesthetic. ASUS has also integrated a fan into their block housing to provide additional cooling to the user's motherboard, VRMs and M.2 cards, which is said to decrease temperatures by as much as 20 degrees. Our only concern with this feature is that it may add some extra noise to the system, which is something that we will look into when we review the AIO.

Both ASUS' ROG Ryujin and Ryuo appear to be based on Asetek's water cooling technology, which means that both units will support both AMD and Intel systems at launch. 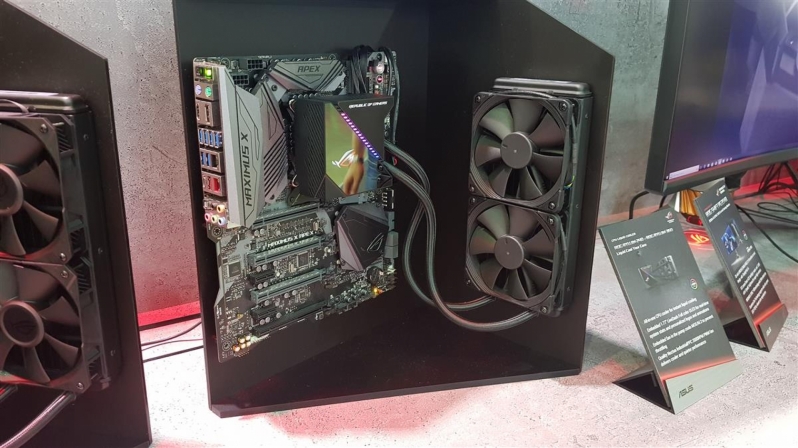 On the lower-end of ASUS' ROG liquid cooling lineup is the Ryuo, which will be available with either 240mm and 120mm radiator and custom Republic of Gamers fans. This AIO appears to be a custom Asetek design, though the integration of a 1.77-inch screen will make the Ryou a lot more customisable than competing AIOs. 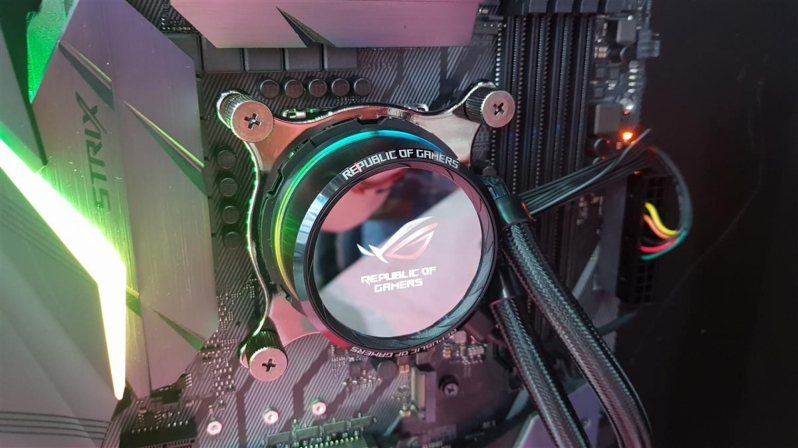 ASUS has stated their new ROG series AIOs will be "available shortly" in the UK, so expect to see more from these AIOs soon.

AlienALX
Gotta admit the phone looks det. And I don't even really like phones.Quote

g0ggles1994
Quote:
Aye, gotta see what the screen to bezel ratio and camera's are like. I would like to see a 256GB storage option though. I can't imagine what the price jump between 128GB and 512GB is going to be.

Jfc the thickness of the Ryujin block though! But I can't say I'm surprised with it housing a fan for the VRMsQuote

Phone... I really like the looks. I don't care much about addons, and connectivity. It is a phone. What is the point of caring a suitcase of addons? At home you have PC. Why do you need docking station? You won't carry it around. Joypad thingy, and that dual screen is good if you are traveling.

For AiO i really like the "classical" shape. Fan to cool VRM... pointless. And the looks... You know what ASUS... too much exists. Don't overdo it.

PSU is amazing. I would really like that this type of fancy PSUs at least make PSU covers removable.

Case i don't like at all. I don't like writing all over it. And here also ASUS you are overdoing it. It is a gaming rig. It will get really hot. Don't put a slab of glass in the front. Design vents that work.

Have a nice time Tom.

Peace Đ
Gotta admit, I initially didn't like the looks of the Ryuo, but now I think it's glorious! You also have to appreciate the resolution of the mini display. I thought it'd be more of a pixel mush

Also kinda liking the phone. My contract is running out early next year, so I might consider that if the pricing is somewhere near the affordable mark. Let's just hope they get their energy management right or I can already see problems arising concerning broken batteries, that broke because the user attached and detached the gamepad/powerbank too often...

I don't really care much about the PSUs as they're a big overkill for me. Hopefully ASUS is bringin some 500W soon with all that fancy stuff.Quote
Reply