When reviewing new power supplies at OC3D, we use our dedicated SunMoon PSU Tester, one of the most expensive (if not the most expensive) tools in the company's arsenal. Here we can see exactly how well a unit can function, looking at its efficiency and power stability, giving us a more in-depth look at the performance of power supply than is possible when using it with standard PC components.

In our video review (next page), Tom will show you this unit in operation, with ASUS' ROG Thor 1200W hitting the peak wattage that our tools are capable of supplying, literally testing our equipment to its limit as we run the Thor series through its paces.

Another factor to note is that the ROG Thor's OLED display and ARGB lighting will sap at this unit's power, effectively lowering the device's efficiency by consuming power to illuminate the screen and LEDs. ASUS could have made their PSU more efficient by removing these features, but where's the fun in that?

Even with LEDs and OLED displays sapping at the unit's power, we can see that ASUS' Thor series sits in line with the other 80+ Platinum PSUs that we have tested, with both the 850W and 1200W units remaining at 90+% efficiency levels at all times.

Our testing will place each unit under 20%, 50% and 100% loads, measuring the efficiency of them under each load. In the case of the ROG Thor, the only PSUs that push past it are 80+ Titanium rated units, the best of the best that the PSU market has to offer. 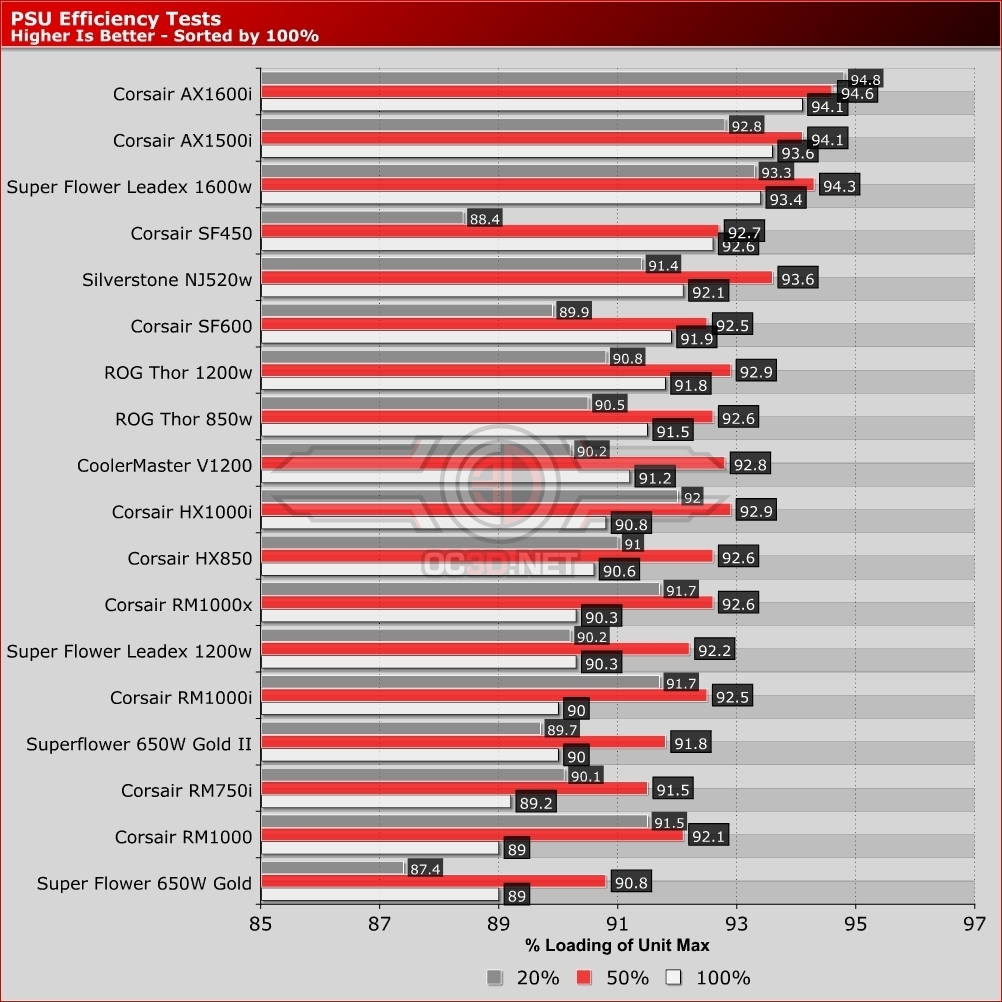 Voltage ripple is something that is often underlooked by consumers, being best be described as the stability of specific voltages that the PSU delivers. A PSU with bad ripple will see voltages vary a lot more, which in extreme cases can damage components or shorten their lifespan. Voltage ripple stability is one of the many reasons why you should buy a high-quality power supply and avoid anything that isn't 80+ rated.

An important thing to note here is that none of the PSUs in this graph is "bad", even the RM1000 bring usable within your system without any issue. Even so, having low ripple is an important factor to consider when purchasing a new PSU. Cleaner power will help extend the lifespan of your PC by placing your system's power circuitry under less strain. Even if the RM1000 is usable in a modern system, we would expect all new high-end power supplies to perform better in this regard. A lot has changed since the days of the RM1000.

Perhaps Ripple is the only thing that lets down the ROG Thor series, giving the newer SuperFlower and Corsair units a notable advantage. We even know how ASUS could improve the ripple in their future units, as the capacitors included in the cables of their competitor's units are designed with ripple reduction in mind. ASUS' ROG Thor units lack this feature.

This isn't to say that the Thor is a bad unit because of this small oversight, just that it could be better. This isn't a reason to avoid this unit, just a little bit of info that will perhaps help ASUS make their next ROG PSUs even better. 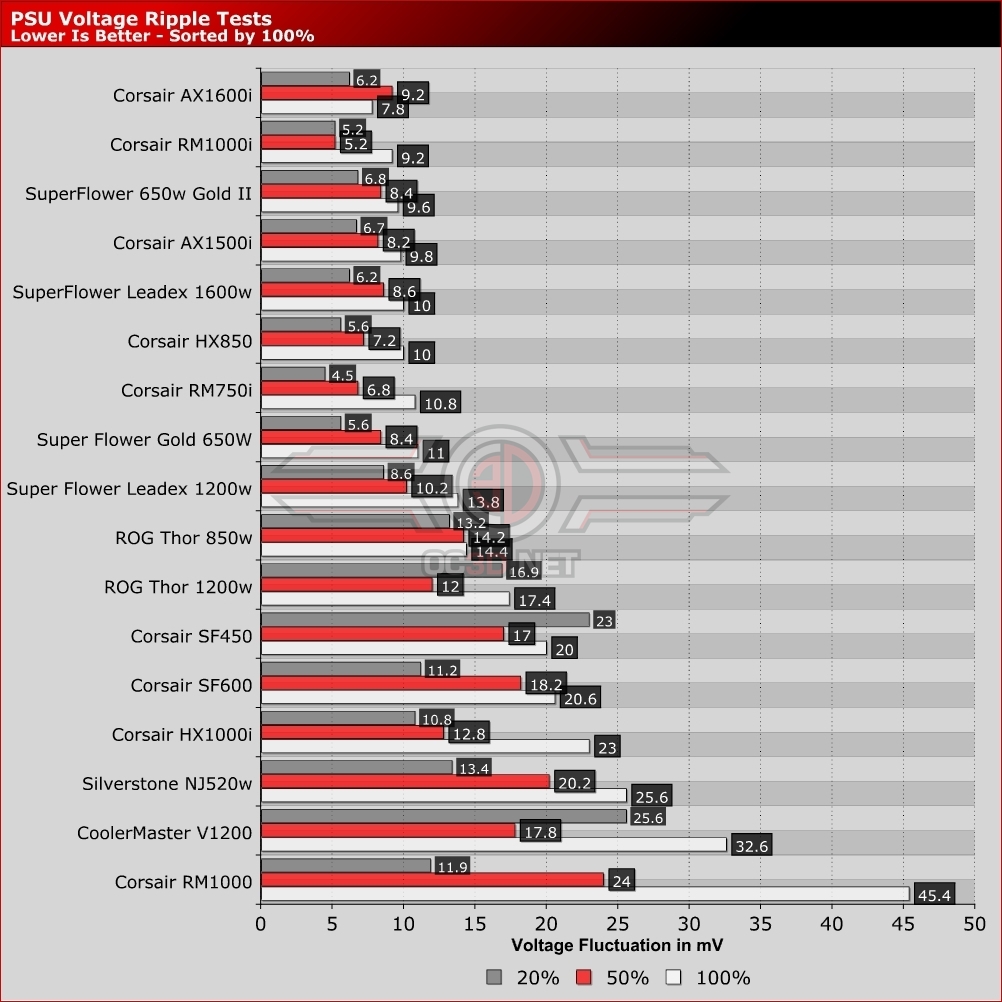 AlienALX
Great review, and bonus points for making up the term "Roggy"

Eddie long
Nice review guv , i do like the looks of them , and i see they got the nod of approval from the senior power supply analyst

Warchild
Quote:
Roggy... as if RoG didnt make me cringe enough haha. I would love to see the "republic of gamers" brand disappear. Along with MSI Gamer X, Godlike, EVGA FTW, and all the rest of the asian marketted terminologies.


Quote:
To be honest, I don't see the point of a 1200W in this day and age. SLI 3/4way is gone. This is aimed at gamers, so even with SLI 2 way and and overclocked CPU you are looking at around 800W usage at most. Components released now focus on efficiency as much as performance. As you said, the 850W variant will make far more sense to the consumer.

Even a 1000W would be catered more towards enthusiast markets. 1200W just makes no sense to me at all.Quote

Dicehunter
Whatever you do, Do not drop 1 of these PSU's on your foot, Otherwise you're going to have a thor toe.....Quote

AlienALX
Quote:
Thor goes out on the sauce one night. He goes to a bar, and meets a young lady with a lisp.

They spend the night in a hotel making love.. The next morning he decides to formally introduce himself..

"You're thor? I'm so thor I can't pith"Quote
Reply