The AX1600i birth has come from the need for greater levels of electrical efficiency in a market where power requirements are increasing. Whether you are creating a Multi-GPU overclocked Threadripper or Skylake-X 12+ core system or building a mighty cryptocurrency mining rig, you know that you will need a power supply that is up to the task.

With a 10-year warranty and the highest levels of power efficiency that we have ever seen the AX1600i is something that has hit us by surprise. In recent years the PSU market has been relatively stagnant, with each product generation typically lowering system power requirements, taking away the driver for PSU makers to innovate.

Corsair has taken a bold step forward with their AX1600i, with its use of Gallium Nitride allowing it to not only provide more power than the company's existing AX1500i but also deliver higher levels of efficiency and a smaller overall form factor.  It is hard to look at this unit and be unimpressed.

Aesthetically the AX1600i is also a significant step up over its predecessor, with Corsair giving users the ability to cover up its regulatory rating stickers with colourful AX1600i magnetic strips, adding a level of user customisation without voiding the unit's 10-year warranty.

Regarding efficiency and voltage ripple, the AX1600i sits as one of the top performers in our charts, claiming the top spot in our efficiency graph.

As a whole package, the AX1600i is a unit that offers nothing to complain about. It provides users with a vast range of cables, delivers some of the highest levels of electrical efficiency that we have seen in a consumer PSU and mitigates the usual aesthetic downsides of standard power supplies. If you need an ultra-high-wattage PSU, the AX1600i is undoubtedly something that should be on your shopping list.

The use of cutting-edge technologies is what truly sets the AX1600i at the top of the company's lineup, offering upgrades over its predecessor, the AX1500i, in almost every regard with heightened efficiency, a smaller form factor and plenty of positive aesthetic changes. The AX1600i has brought innovation back into the PSU market, leaving us excited to see the use of Gallium Nitride in other future power supplies. For this reason, we are giving the Corsair AX1600i the OC3D Innovation award. 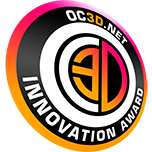 You can join the discussion on Corsair's AX1600i Power Supply on the OC3D Forums.

AlienALX
Wow. Overkill 3D is back

Fantastic unit. Amazing how similar it looks inside to the AX1200, only it's got a third even bigger capacitor in it

K.I.T.T
It's impressive what they've managed and it's good to see GaN making it to the consumer space but it's a shame they used the Transphorm parts when EPC and GaN Systems parts are objectively better in a number of ways.Quote

Kaapstad
The AX1600i is a great addition to the Corsair line up.

It would be nice to see a 2000W or higher version as there is a need for it.

The amount of power my 7980XE @4.8 and mGPU can use is silly numbers, it would be nice to be able to power it with a single PSU.Quote
Reply