Introduction - A lot has changed for the SF series

A lot has changed since Corsair's SF series of power supplies made their debut in mid-2016, so much so that the release of their 750W SF750 will be a very welcome sight to some of the PC building community.

At that time, the efficiency of PC components was at an all-time high, with Intel's Skylake desktop architecture offering a lot of performance for relatively little power draw while Nvidia's Pascal series of graphics cards, and AMD's Polaris series of GPUs, offered notable improvements in performance per watt thanks to their use of 14nm lithography.

Since then things have changed enormously, with the introduction of AMD's Ryzen architecture packing more cores into desktop form factors while larger graphics cards came into the fold to gobble up as much power as your system can handle. Since 2016 the high-end desktop market has moved from quad-core systems to eight core systems, and GPUs have gotten larger and more power hungry, creating the need for higher wattage power supplies, especially within the SFX form factor.

While some manufacturers have aimed to deliver higher SFX wattages with the experimental SFX-L (longer than standard SFX) form factors, Corsair has opted to challenge their engineers by increasing the output of their SFX units while maintaining the same form factor as before. With the SF750 Corsair had to pack 25% more power into the SFX form factor, a staggering feat for a 100mm x 63mm x 125mm unit. 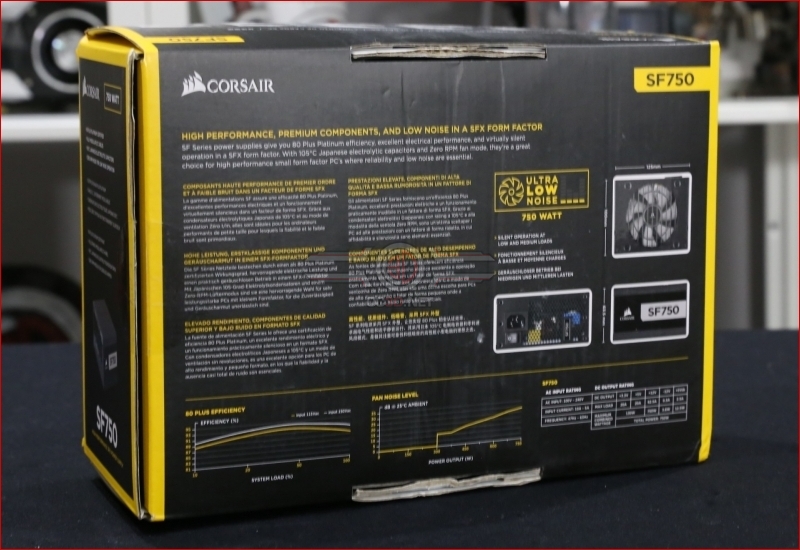 We are often asked what's the point in PSUs that sit above the 80+ Gold Rating? Surely nobody games enough for a few percentage points in PSU efficiency to have a meaningful impact on my electric bill? Well, there's more to it than that.

Yes, increased PSU efficiency will have an impact on your electric bill, but we must also remember that your PSU's wasted power has to go somewhere. For the most part, wasted energy within your PSU becomes heat, which means that high-efficiency PSUs often are cooler and quieter than their standard counterparts.

This is particularly true for small form factor power supplies, as they are forced to concentrate their heat producing components into a small area. Corsair's platinum efficiency rating is what allows Corsair's SF750 to shine, enabling the unit to offer 750W of power while also providing relatively low noise levels.

Since the release of the Corsair SF series, the company has since refreshed the series to upgrade it's 80+ Gold Rating to 80+ Platinum for newer models, an upgrade that now carries over the SF750. If we are honest, this upgrade in efficiency is likely what allows Corsair to deliver 750 watts of power through the SF750 in the first place, at least from a heat dissipation perspective.

PSU Cables - How Many Cables?

With their SF750, Corsair has opted to increase the cable count of specific connectors, making their high-wattage SF series units more compatible with a wider range of machines.

Perhaps the most notable changes are the PSU's use of two EPS connectors, a change that is designed to improve compatibility with systems that use high wattage PSUs and the power supplies use of four PCIe power connectors and eight SATA power plugs, an upgrade over the 2x PCIe plays and 4x SATA plugs that the SF600 series offers.

Below is a list of all of the power output options that are offered by the Corsair SF750, all of which are modular. Lengths of each cable can be seen in the image below. 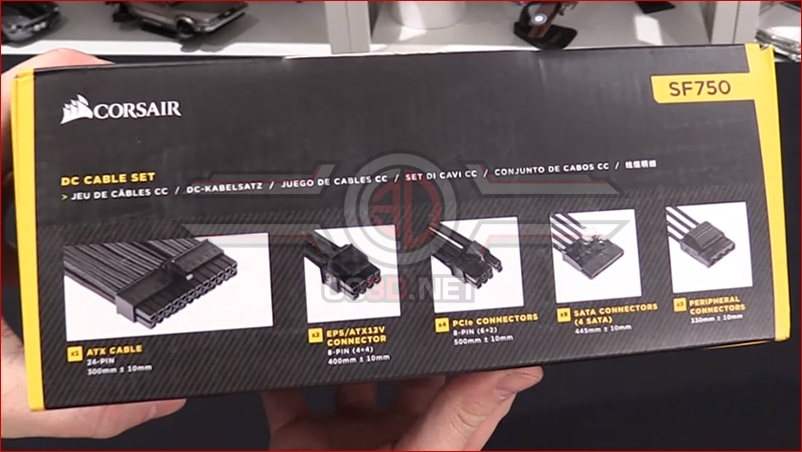 66racer
My dream PSU!! Wont need to go dual SF600 in my SFF builds anymore! (for most builds at least)Quote
Reply