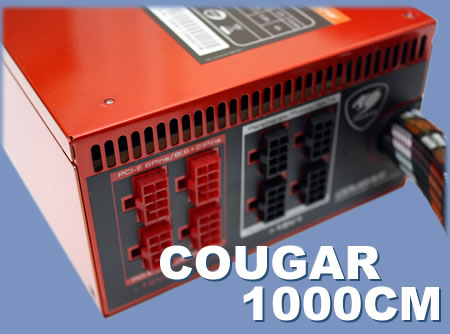 Big changes have been made to the packaging design from when I first visited the 1000CM last year with the front of the box now sporting a Lamborghini style logo badge on top of a pin stripe gray background. A curved orange title bar also contains the text "Cougar CM Power", but there's no sign of the original "HEC Compucase" logo anywhere.

As much as I'd like to think these changes are all because of me, a quick search of the internet reveals that I may well be reviewing the German manufactured version of the 1000CM here, whereas my earlier review was of the Taiwanese 'HEC' version. Let's hope that it's "Vorsprung durch Technik"! 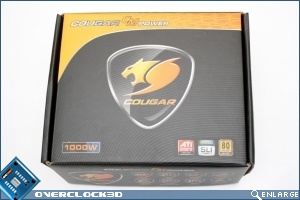 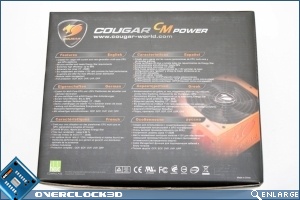 A number of other badges have also been placed on the front of the box including both SLI and Crossfire certifications, the 80PLUS Bronze certification I mentioned on the previous page and of course a sticker pointing out that this is the 1000W model. The original "87.5%" efficiency sticker found on the HEC version of the unit is no-where to be seen, but that's quite possibly because the 80PLUS sticker can do all the talking now.

Around the back of the box is a basic specification list printed in a total of six languages. A faded image of the unit in all its orange glory is also present. 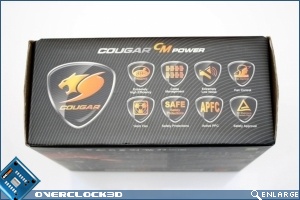 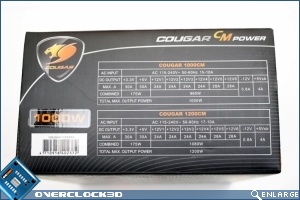 No matter which side of the box you look at Cougar have printed something there for you to read. At one end of the box you will find yet another specifications list, only this time with several images to represent each of the main features, while at the other a printed rail distribution charts for both the 1000CM and 1200CM models. There's also one other side of interest (I forgot to take a photograph) that shows how many connectors of each type are included with the unit. 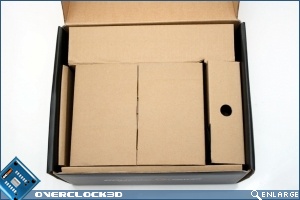 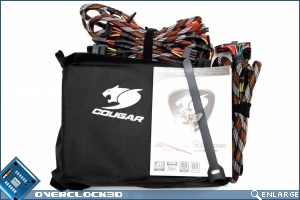 Opening the box reveals three cardboard compartments that house the PSU, modular cables and other accessories such as the case screws and manual. The PSU itself is placed inside a black canvas drawstring bag that should protect the unit from any minor marks or scratches caused by contact with the cardboard packaging during shipping. Although there's no molded polystyrene inserts like I've been seeing more and more recently from companies such as Corsair and OCZ, the thick cardboard ribbing around the PSU area of the box should be enough to protect the unit from most knocks, dents and drops. 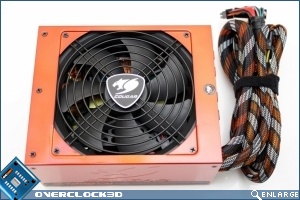 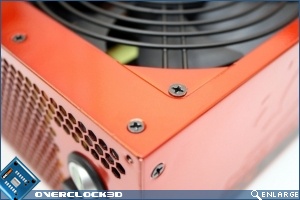 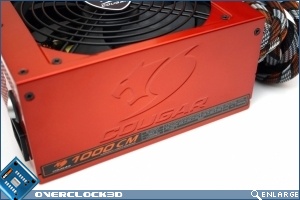 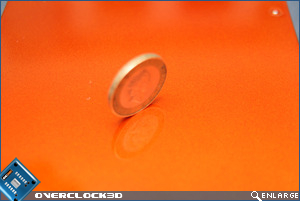 As I said in the previous 1000CM review, the unit is finished in.. ."an extremely striking metallic orange paint job contrasted with a black fan grill and screws. Although the paint job certainly isn't up to automotive standards when it comes to glossiness and shine, viewing the PSU from different angles gives an almost colour-shift effect from dark orange, to light orange, to gold. Anybody building a PC based on an orange and black theme is going to absolutely love the look of this unit. The only down-side of course is that it's not quite as robust as a powder-coat finish and will scratch/chip if mishandled."

There are some subtle differences though. Firstly there's the revised fan grill sticker that no longer says HEC, but Cougar instead. Then there's the absolutely awesome Cougar logo embossed into one side of the unit. Also, as you will see in the picture above-left, a slimline specification sticker has been placed along the join between the PSU base and lid. Although it probably has little practical use, it does look good and made my life hell for a few minutes when trying to take the PSU apart. 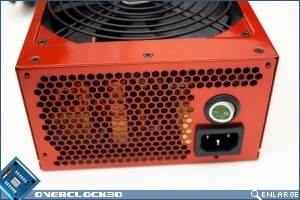 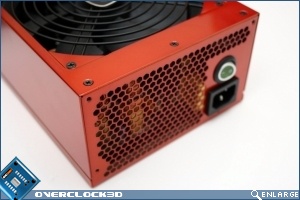 At the back of the unit is the usual honeycomb grill accompanied by a power switch and kettle lead style plug socket. In case you're wondering - yes the switch does indeed light up when the PSU is powered on, but unfortunately in green and not orange. Boo! 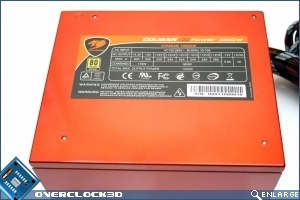 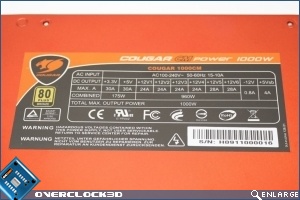 The specifications sticker has been moved to the top of the unit ensuring that it is out of sight once the PSU is installed inside a case. As per usual the sticker is printed with a rail layout chart for the unit along with various other global safety certifications and warnings about how you'll get zapped if you open the PSU casing.

Now lets move on to the next page and take a look at those modular cables and internal components...