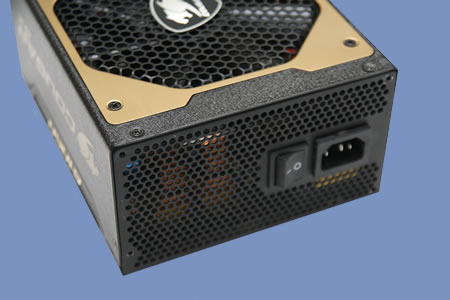 Some of you may have heard the rumours that I was reduced to a pile of smouldering ash after over-zealously pushing a Chinese made no-name 1500w (relabelled 500w) PSU beyond its limits last year. And yes, everything you heard was true. Unfortunately for me though, my esteemed colleague Tom Logan wasn't going to simply let me rest in peace. Instead he exhumed my body, (probably fondled it inappropriately -ed), and by combining the power of his 1,000 CPU strong [email protected] ([email protected]) server farm, was able to re-animate me so that I could bring a steady stream of PSU reviews back to OC3D once more.

Of course, everything I've said up to this point is complete nonsense. But I think you'll agree that it makes for slightly more interesting reading than "The wife gave birth to our Daughter, and I decided to take a well deserved break"!

So, today is my first PSU review in almost a year. And what better way to get back into the swing of things than with a PSU from a manufacturer who simply refuse to churn out drab black boxes....

Cougar first came to us in October 2009 with their 1000CM 1kw PSU. Fresh on the UK scene at the time we agreed to take a look and came back to them with some constructive criticisms regarding the unit. Much to our surprise, a month later they delivered a revised version of the PSU to our offices which addressed most of the issues and earned a recommendation from us.

Since then it would appear that they have been going from strength to strength, with a vastly expanded range of PSU's available in wide selection of outputs and designs. Today though I'm going to be concentrating on the latest and greatest model in the line-up, the GX 1050w. Let's get cracking.... 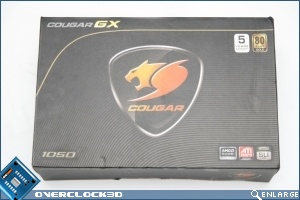 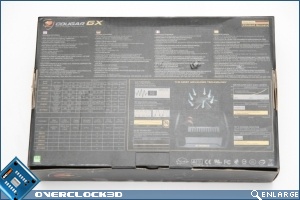 Starting at the most logical place - the beginning, we can see that Cougar have changed their design very little from the original 1000CM unit. The theme is dark with a feint orange/gold pinstripe and a glassy Cougar emblem takes up the majority of space (almost like Cougar didn't really have an artist available to help with the design). Around the back of the box is the usual specs list in the four main Euro languages along with a brief explanation of some of the PSU's technologies and the obligatory rail layout diagram as reproduced below.

25A appears to be the magic number here as every single one of the rails barring the -12v and +5VSB is rated...well more likely limited...to that amount. The GX 1050w has a total of six +12v rails capable of a combined power output of 1008W (84A), which certainly will make my testing of the unit more involving. However, as most enthusiasts will probably tell you, there's no clear winner when it comes to single rail vs multi rail configurations, so I'm not going to get into that debate.

MAXIMUM EFFICIENCY
Up to 93% of efficiency, compliant with 80-PLUS® GOLD efficiency requirement .

DYNAMIC MULTI-12V
Automatic dynamic load distribution on multi-12V line provide power separately to the GPU and the CPU. If you are not using all output lines, the PSU automatically reroutes needed power from unused lines. This improves the performance and safety of the 12V lines considerably for systems with high-end graphic cards in SLI® or CrossFire® mode and provides high voltage stability to keep components safe.

Other notable specs as extracted from Cougar's much longer list on their website, include impressive 93% efficiency, DC-DC voltage conversion and <1% ripple thanks to a 'CLC Filter Design'. These are all things we should be able to test over the next few pages, so it will be interesting to see if the GX lives up to the marketing spiel. 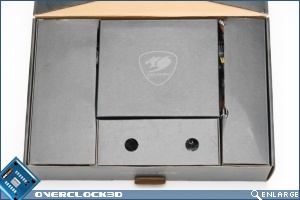 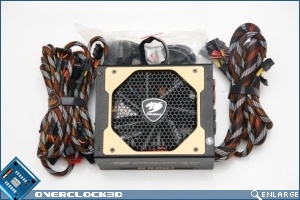 Inside the box everything is compartmentalised to minimise any transportation damage. Cougar have provided a generous bundle of modular cables along with some velcro cable ties and the usual mains cable + case screws. Essentially, everything you need to get up and running. 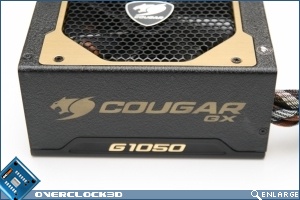 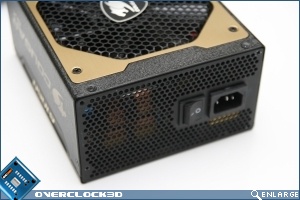 Jumping straight in with some pictures of the unit, we can see that Cougar have gone for an off-black wrinkle powdercoat finish complimented by a gold fan grill. This not only makes the unit look (and feel) quite rugged, but also gives the impression that you've purchased a premium brand unit. 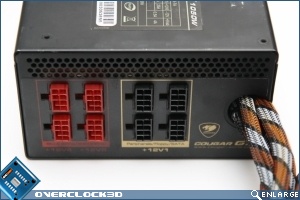 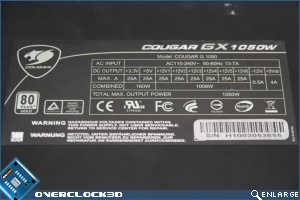 Moving around to the back, we can see a total of eight modular connectors along with a small bundle of hard-wired cables exiting the unit. As expected, the red connectors are designed to used exclusively with PCI-E graphics cards, whereas the black connectors are for both SATA and Molex modular cables. Cougar has also thoughtfully printed the +12v rail number below each bank of connectors, making it easier to balance the load on the unit.

Now let's move on to the fun bit - dissecting the unit...

kilobravo
Nice looking psu,but i can get a corsair ax1200 for less money.

VonBlade
Great to see you back Mr Jim.

Good to see yet another monster PSU from Cougar too. I still haven't heard any 'whoops it's dead' comments about the CM1000.Quote

theWarrden
Great review Jim! and Welcome Back :-) Loving those graphs slightly off topic sorry! Looks like for me orange is the new black, actually no orange & black is the new black on its own lol

Keep it up guys, our tech thirsts need quenching like this :-)Quote

A bit expensive for my tastes, but a nice looking product nonetheless.