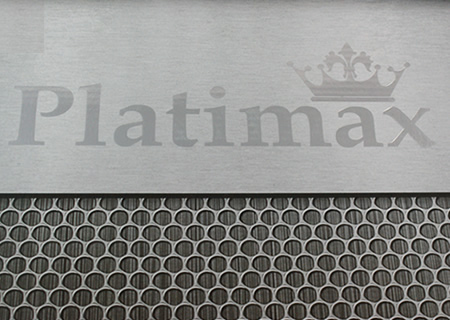 Three 'precious' metals that mean everything to Olympic athletes, children running the egg and spoon race, and of course, power supply manufacturers! When the organisation responsible for 80PLUS gave us these three new standards back in 2008, PSU manufacturers around the globe scrambled to bring their units up to standard, firstly aiming for bronze, silver and then inevitably gold.

Of course, I don't think the guys at 80PLUS realised how competitive the PSU market is, and in no time at all we saw a raft of power supplies on the shelves boasting the Gold 80PLUS standard. Therefore it's no surprise that just over a year later in October 2009 they upped the anti once more publishing the requirements for a new 80PLUS Platinum standard.

Ironically, the new 80PLUS Platinum standard is the first one coined that requires a PSU to have 90% plus efficiency across the entire load range on a 240v wall socket. These extremely high efficiency requirements have kept manufacturers busy for the best part of 2 years trying to come up with new ways of designing PSU's that don't compromise on power output performance while doing so with as little energy wastage as possible.

Today I'm going to see if Enermax's efforts have achieved this goal with their recently released Platimax 1000w unit, so let's waste no more time and check out the specs.

As I've come to expect from Enermax, the list is certainly long and was no doubt compiled by a team of marketing guru's to ensure it could easily fill every square inch of the packaging. One thing that I do find quite intriguing is that a lot of the features are model dependent and are only available on the higher output models. You won't see all these features in the list above (as I needed to trim it down a tad), but things like the FMQ Design, Copper Bridge Array, Fully-Modular Cable Management and Extreme Density Transformers are only available on the 1200w and 1500w models - not the 1000w model I've got here today. 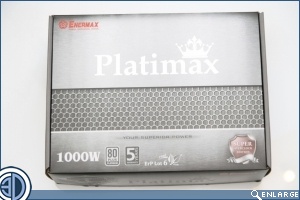 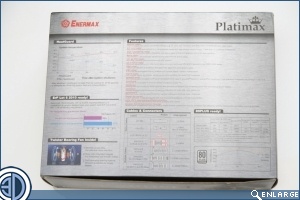 However, the 1000w model does have something going for it that the others don't - a single beefy +12v rail! This is what makes the model I'm reviewing today the "Super Overclock Edition"...and of course...all of the other models not-so-super overclock editions! Of course, I jest. But it is quite intriguing to see that Enermax, a company that have always backed the multi-rail +12v design for its superior safety, going against the grain and producing a 1000w PSU with enough amps on the +12v rail to tig weld scaffolding together!

It's not all flying sparks and welding masks across the entire rail layout though, with the +3.3v and +5v rails putting out a rather limp wristed 20A each and a maximum of 100w between them. This is the lowest output I've seen in a long while, and even including PSU's with outputs as low as 750w, still falls around 40-50% short of what I'd consider the norm. Maybe this is due to the lack of devices in the modern PC that operate at these voltages, or possibly a necessity in order to reach platinum level efficiency. Regardless, buyers of the Platimax will have the last say in whether they need the extra power on these rails - and my guess is that they won't. 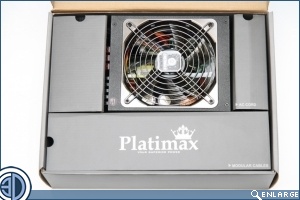 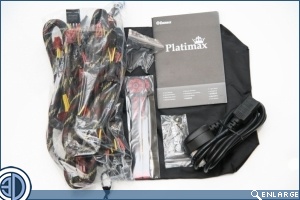 Moving on to the actual contents of the packaging, it would seem that Enermax have taken a more traditional approach to delivering the Platimax in comparison to the MaxRevo reviewed recently. A single cardboard box has been used along with three cardboard inserts to create sections for the modular cables, mains cord and hard-wired cables to be stored. Also included in the bundle is some branded velcro cable ties, some screws, an Enermax badge and a mains cable retainer clip. 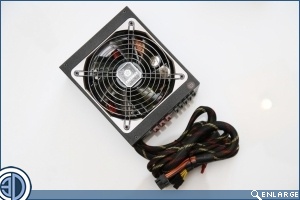 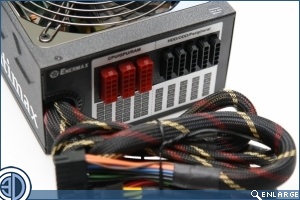 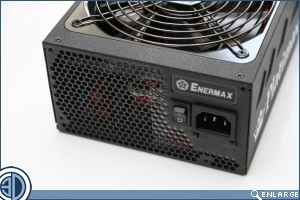 The appearance of the Platimax is, in a word, sublime. I've never been one to go for the whole 'gamer' appearance of garish red/green PSU's with flashing LED's and LCD screens, so it's great to see that Enermax have kept the Platimax relatively simple despite being in the "Super Overclock Edition" guise. The entire unit is finished in a textured grey/black powdercoat along with white "Platimax" decals down the sides. The fan grille and surround are also electroplated in a highy reflective gunmetal style coating which completes the look. If only all Enermax PSU's were this gold-free :)

Now let's move on and see what the inside of the PSU has in store...